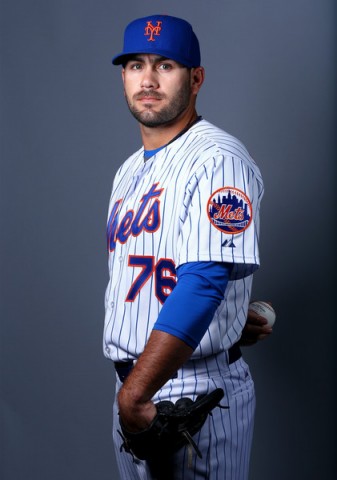 SABRMatt pushes chips in toward the bet that the Mets have simply botched it, in letting Bradford get away:

They did what I hoped they would and took advantage of the Mets' stupidity. NY released Chasen Bradford to make room for Adrian Gonzalez' crusty old butt. Seattle pounced. Hey look, a groundball specialist with pretty decent numbers in the majors last year who has three option years left.

As Lookout Landing points out, Bradford is a tight-spin (2600+ RPM) slider guy.  You can feast your eyes on the perfect version of this pitch at the first .gif in Kate Preusser's tight little report.

Since his fastball is ML average at best, what you're hoping for here on the UP is --- > well, there are NOT actually many shelves stocked full of precedents for RELIEVERS who combine vicious sliders with 91 MPH fastballs painted time and time again.  (Erasmo Ramirez is actually an interesting little reach here.)  Bradford, if he becomes an impact reliever, is going to do it by throwing blizzards upon blizzards worth of painted strike ones -- MLB batters, greedly for pulled airballs, do not swing at painted strike ones -- because what you have here is:

ML scouts like to have a template to point to, a 6' cardboard cutout, something that they can at least hope a player could become.  With Bradford it's awfully tough to find that cutout.  With starters you can do it; there are sinker-slider groundballers who keep the ball in play, who make the percentages work in their favor.  Lowe, Westbrook, Masterson.  Funny that relievers are kind of more unusual.  The trend, as you know, is toward huge flotillas of 96-MPH studs coming in after the 6th.

So Dipoto here is playing Billy Beane here to a room full of skeptics.  Of that, Dr. D thoroughly approves.  :- )

THE OPTION YEARS THAT MATT UNDERLINES

As you know, it becomes more and more and More and MORE of the game, the Cheney Carousel.  Also, Bradford can twirl 2, 3, IP at a time.  Not tough to imagine him coming up and smoothing out a 18-games-in-19-days stretch.

Speaking to the other post up this morning ... if you don't have Yu Darvish joining your travelin' squad, if you have 9,000 guys competing to see which one "breaks out," the fact is you just gotta wait and see.

Dipoto has never really gone after this particular TYPE of pitcher before, a mediocre righty whose calling card is a plus (-plus) slider, so kudos for the flexibility.  Chase Bradford is in there when pitchers and catchers report -- are we coming down to a month on that? -- and if Bradford hits the mitt, well, he's no Blake Beavan.  He's got what it takes to put batters away.

Little bizarre that this guy spent FOUR YEARS at AAA, no?

I mean...that's almost Crash Davis territory, isn't it?  That absurd BB/9 rate in his first taste of AAA (0.78BB/9 to go with 8.2K/9) somehow wasn't enough to earn him so much as a cup of coffee in that year or the ensuing two.

Jonez, he sort of got ripped at AAA

When I saw that the Mets had released him I almost made a thready comment about him and his MLB leap,  I thought he was interesting and worthy of a cheap look.  But time got in the way.  But as I sit here listening to it rain, about to head out in search of a steelhead with the fly rod, I have a bit of time.   Compared to AAA, his Batted Ball profile shows that his line drive rate dropped from a AAA 23% to a MLB 15% and his pulled ball rate dropped from 44% to 35%, while his balls to CF % went from 20% to 40%. I wonder if he totally gave up on the back door slider.

So Bradford is either the beneficiary of a lucky MLB small sample size OR he sort of figured something out.  The Mets bet on the former, the M's on the later..  I don't know what his MiLB pitch profile was, but in the bigs he sort of went the Bartolo Colon route (which is the one I have advocated for Andrew Moore):  He threw 71% fastballs, 25% sliders and 4% change-ups.  I'm betting three of the things he did in the Big Apple were simplify, simplify and simplify.  His BB rate basically doubled in the bigs. SSS?  Or perhaps the Colon-route simple meant he was throwing his FB into a tea cup 2 inches outside, all-the-time!!

For a buck ninety-eight this was a low-risk get with a nice pay-off potential.  It won't take long to figure out if he's figured someting out.

I believe he fills our 40-Man, and I can't believe Dipoto is done adding such guys.  So who is the bubble guy,, first to be let go?

Vegas is famous for being HORRIBLE for groundballers.

SUPER-hard infield, not that well maintained because it's tough to keep good grass on a small budget in the desert...

Also, the Mets have long had a very...very weak farm system, especially for infielders. So...I wonder how much was bad defense.