Skip to main content
Sabermetrics
Forget the W's. Just track the BASES.
But technically, we do have a Winning Team 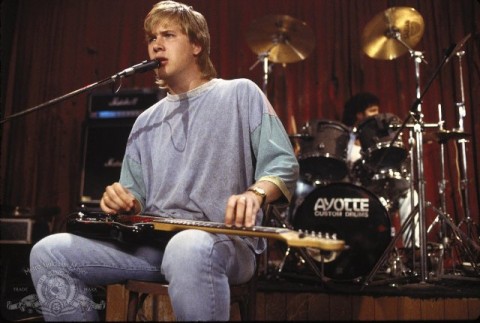 The Mainframe, or so it tells us, has been sitting on a theory about baseball.  He has just about grokked that GM's can try to --- > add BASES and therefore runs.  Dr. D is much less sure that GM's can do a lot to decide WHEN the bases collect and form friendships.

Okay, I plagiarized that, maybe.  From Brad Pitt or Jonah Hill or Michelle Obama or Yoo-Hoo Rick.  What difference, at this point, does it make.  (Readers note exactly one kazoo raspberry at either side there.)

If and when the M's get on their roll -- and Dr. D is typing from behind a net here, like Jeff Healey in Road House -- Lee and Lind combined will be part of the rapture.  Well, short of us trading for a AAA Prince Fielder who hits from the left side.

HeyBill:   If MLB used a different criteria than W/L, such as some run differential (Runs Scored - Runs Allowed), to determine champion how do you think the game would be changed? Since every run was important teams would be aggressive throughout the game despite score. Managers would pull pitchers - not leaving somebody in to get shelled, in lopsided games. Since pythorgorean calculation does predict W/L % fairly well, maybe the change would not have as great effect as I think. College football, and I think the NFL at times, have used point differential as tie-breakers without much acceptance by fans .........
Asked by: FrankD
Answered: 7/18/2016
I think it would fundamentally undermine the game.   If all the runs are poured into a pool, then nothing happens today that cannot be undone tommorrow.   We've got a game on June 18 . ..why worry about it?   All it is is a few points that are poured into a vast lake of points.   So basically, if that was the way the game was, there would be no game because nobody would watch. - James

Which, if true and we're sure it is, leads us to (1) a Big Light Bulb and to (2) a followup introspection:

Baseball is weird, maybe unique.  In football you can do things, with your roster and etc., to have some influence on whether you get that last 2 yards you need, after the first 78.  It's not completely luck whether you punch in the touchdown.  Even if you don't, there is the feathering influence of the field goal.

But if that were really 100.00% of what a GM, a manager, and his players can do to influence their W's and L's?  To collect bases on a white board in February?  The whole spectacle would collapse -- for me, anyway -- like a house of cards.

Fortunately, no SSI denizen be'lees dat.  He's been blaming the M's character for their underperformance all along.

There's a mitigating factor.  It's the 162 games.   If you played a MILLION games, then a team with a 109 OPS+ and 103 ERA+ would make the playoffs with calculus-limit certainty.

Everybody see that play Eaton made to nail the piano named Cruz at the plate? Reminded me how bad our own defense has been. In the infield we have Seager, who despite general excellence, has been making a lot of errors lately, Marte who is at best average, a healhy Cano who has regained his averageness, and the Lind/Lee fence post combo. In the OF we have the excellent Martin surrounded by guys who can't run.

That's a genuinely dismal defensive unit. I've always like bat-forst teams but I gotta think this is one of the main reasons we are underperforming Pythag.

Meaning that one position, the EASIEST to fill except perhaps 1B, has cost as many runs as the rest of the positions combined.

It's a funny thing, isn't it?  We're at 40 years and counting in Seattle, looking for a regular left fielder.  It's quite a phenomenon.  Speaks to the tall, thin pyramid of talent we've always had.

Great post, materially right on point ... one minor note:  Pythag goes off runs scored and allowed, in our case +451 and -413 for a 51-44 Pythag.  Defensive losses have already been factored in to our actual runs.

So what we're saying is that if Dewan's figures are right, the M's (with an average defense, not a good one) would have given up -388 runs rather than -413 and their Pythag would be 55-40.  Presumably the team would have brought those four wins onto the field and they'd be 52-43 right now.

Interesting that DiPoto talked so much about a "Run Prevention Model" and especially OF defense in Safeco.  I'm glad to know he isn't dogmatic.  Could use a two-way left fielder, though!

It is curious about DiPoto. Maybe he has a more nuanced view of defense than we do, perhaps that's it's only important in a few places - behind the plate and CF to start with.

Wait! Are you forgetting the glorious Ackley years?

Wow. That bad in LF? Egads! B-Ref has Seth Smith at -1.3 dWAR, Aoki at -0.5, and Guti at -0.3 (it pains to type in the latter). I figured these guys were playing replacement level. But that's a whole two games lost. But! Offensively Aoki is at -.3, Guti is 0.7, and Smith is 1.5 so it's almost break even out there, but still running a deficit. There are only so many Alex Gordons in the baseball world.

But how many franchises out there have memorable traditional left fielders at all? It seems that position is the fungible one for just about everybody. Even if you have a regular one, you put him there because he'll hurt you the least there with the glove (cough cough Barry Bonds).

How often do any of us ever say, "(Joe Slobotnik). Now there was a great left fielder."

But still, with everyone sending out a bat to play LF, that really says something about how bad our defense is out there. We have three guys, good bats (for the most part, Aoki...), mixing and matching, and we are still at a deficit.

Bases and Games and Seasons and Careers

Bases vs. Games is similar to debate over Seasons vs. Careers, which I have been contemplating.

Championships are won in seasons and yet Hall of Fame seems focused entirely on careers.

Edgar had about eight of the best seasons of all time and yet because he only had about 8-10 of them he's way down the list for Hall of Fame, whereas guys make themselves "automatic" by getting to 3000 hits over the course of 20+ decent seasons.

I would argue that Paul Molitor's best season would have been about Edgar's 7th or 8th best season.

Actually can we separate that out...

But in the meantime, would you rather have James Paxton turn out to be Sandy Koufax (by far the best pitcher in the league for 5 years) and key a dynasty?, or have him turn out to be Bert Blyleven (who of course wasn't chopped liver)?  For me the answer isn't real hard.

Answer gets easier as you get older, too, right DaddyO :- )