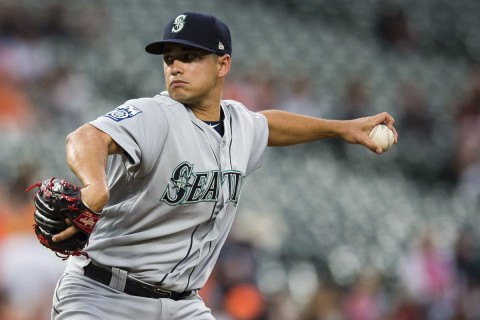 Marco posted yet another A+ quality start on Sunday night, with six innings, 2 earnies, and a 2:7 control ratio. He did this, sadly, with his B- stuff.  Dr. D was in a deep melancholy, watching him pitch without his curveball, honestly the very first game I remember all year in which he didn’t have it to work with.

There was a pitch in the 4th with which I was particularly taken.  Marc-O had thrown a first pitch strike, of course, and then he set himself IN THE STRETCH as always, wound, and pulled the string on an 82 (!) changeup for a garbage swing.

I was taken with the pitch not only because the changeup velo is dropping a bit here and there, but with the body language he used to throw the pitch.  We are here to tell you that the usual cliche is here as good as gold; this guy pitches with the savvy of a Mark Beurhle.

Or take the inning in which the following occurred:

With the bases loaded and one out and the defense at fault, where does Marc-O's body language go?  Straight to victory, mates.  He used a deadfish 82 MPH change to strike out the next man, no runs scored at all; then the next pitch a curve ball was popped up to short center field.  A 1-out Houdini.

While we're raving, there is another thing I love about the pitcher:  he does not strain to hit 89, 90 MPH.  He can and does hit 93, 94 MPH when he wants to, but he doesn't want to.  James pointed out years ago that soft-tossers tend to get injured more because they're always straining to get their fastball up to 90; Marc-O is an exception to this rule.  So was Moyer; so is LeBlanc.  These are graceful, balanced pitchers who hit their 90's and 89's and 87's with a buttery-smooth motion.  That's important.

Velocity is one of the factors that goes into durability, but so is strikeout:walk ratio.  Billy Beane always has a stable full, which he rides hard and puts away wet.  (We're confident that JeDi is working on this problemo as we speak).  Back to the CTL ratio:  Marco's is 111:25, which is #8 in the AL, just ahead of Gerrit Cole and Trevor Bauer.

Take off your hat a moment.  Reflect on the fact that a healthy Marc-O and a healthy Wade LeBlanc are the two things nobody saw coming, and the reasons we sit on top of the Wild Card.

What a couple of finds by Jerry Dipoto, wouldn't you say?

NICK VINCENT.  Not sure what happened to this guy. One moment he had the number 2 swing and miss fastball in the American League; next moment he’s useless, looking for innings in a 6-run game, and botching that. Anybody know what happened?

JUAN NICASIO.  In theory, the ability to swap him in with Pazos as matchups dictate in the seventh inning, gives us a fairly exciting and should-be stable lead into our twin closers. In practice, he can into the game and went from 92 92 93 93 93-pop up. Your thoughts would be?

CLOSER.  Dispatched the first two rodents easily with that 91 mph dive ball. An amazing pitch.  You try to compare; Felix' awesome 90 MPH "changeup" / dry spitter reminds, but this is even better.

Got the last one on the pop up. Pitched like a closer, which is what we traded for.

MEGACLOSER.  We're 47/47 when he enters with the lead.  I can remember a few Mariner teams that didn't.  Are you taking a moment to savor the show?  It ain't that often it comes around.

MORE FREE SHTICK.  At my 2nd site D-O-V there' the "extra" post you paid for.  ;- )  If you enjoy the Think Tank and crave its sur-vival and thr-ival, you may wish to check out Dr. D’s fundraising shtick.  Or if you know you’re ready to join the Ownership Committee, here’s a direct link to the sponsorship page.  Thanks!