Skip to main content
Postgame
... M's 6
a win, and a career, to shout about 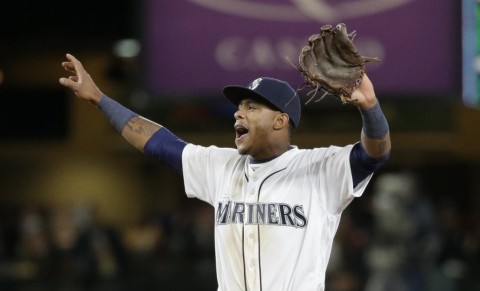 They reported on TV that Big Boy was crestfallen over the freefall of his batting average (down to .288).  Lee shortened up his stroke and lined an RBI single into center in the first inning.  Later in the game, he lined a two-RBI double down the right field line.  With his OPS+ back up to a respectable 150, we're sure he can now live with himself.

Technically, the jury is still out scientifically on whether sugar causes obesity, whether matter and energy conserve, and whether Dae-Ho Lee's "sample size" has established him as this year's Jung-Ho Kang.  But if there's anything you can learn from Dr. D on this website, it is that science was made for man and not man made for science.  (Keeping in mind, the scientific consensus du jour is one thing and rationality another thing...)

The last two days, the TV crew (which derives its attitudes and disposition from the dugout) has begun to open up the conversation as to whether Lee might just possibly be able to hit right hand pitching.  The only thing there is ...

Adam Lind had a real slow April, but had you noticed the last month?  Since May 8, in twenty-five games, Lind has batted .262/.308/.536 despite an unlucky BABIP of .242.  He's got 7 homers in 91 plate appearances, which would be easily 40+ over a full season.  In other words, Lind took a month to transition back to the AL, but since then he's been Old Reliable Lindsanity.

If you can play Smith-Aoki-Cruz in the outfield -- the M's both could, and did -- why can't you play Smith-Martin-Cruz?  Why don't you put Adam Lee or Dae-Ho Lindsanity into the lineup at the same time and give yourself FIVE big bats?

Well, let Aoki take them when they're lefty.  Then get Lind in there against righties.  But to keep Lee on the bench at this point, is a little bit like the FDA continuing to insist you should eat Wonder Bread and avoid sirloin steak.

Alternatively, you could put Big Boy in there for Seth Smith if you felt as though Loki were a given.  Look, gentlemen, Seth Smith is very cool.  But his OPS+ is 113 both this year, and for his career.  Which do you want tomorrow in Fenway?  113 hard on the barrelhead, walk away ... or take you a spin of the Giant NPB Prayer Wheel?

Bill James just heard a TV announcer point to Jean Segura as an example of a young hitter --- > who has been a free swinger, and so doomed to fade after a first big year.  James wondered about this, and then he looked in to it, and then he did a landmark study asking "Is it true that young free swingers have more difficulty moving their careers forward than young hitters who control the zone?"

And then he came up with an entire "Player Growth and Sustainability Profile" metric, to gauge which young hitters are most likely to blossom and sustain success.  He states outright that the PGSP metric is of use for MLB orgs in deciding to make trades, so ... why he published it, considering he's a Red Sox employee, is curiious.

We'll summarize his 4-part series for ye soon.  Basic answer to the "Free Swingers" question is, it doesn't make any difference.  Turns out, the biggest thing you can do to identify a very young player in for a big career, though, is ask whether he switch-hits.  Nothing would put more wind in the sails of Marte's 5-, 10-, and 15-year ocean voyage than if he had come up as a player who can bat from both sides.

Of course there are several other keys, too.  Marte ticks the UP indicators on every single one of 'em.

The M's are -6 out of the division, -3 out of the wild card, playing a WC rival over the weekend.  Has everybody here seen how Boston has been hitting?  If you stopped the season right now, the Red Sox' lineup might be better than any that have come before it in Boston.  And in that park ...

The M's have got a really good team, on pace for way over +100 runs on the year.  Three or four games in June, whatevah.  They're in it for the long haul.

Lee is hitting 277 against LHP and 327 against RHP

In March, there was talk about Lind needing to play EVERY day and maybe they should use Lee just as a pinch-hitter and 1x/week player?  Guess here was --- > these things have a way of shaking out.

If the reality is that Dae-Ho Lee can SLG .500 full time in the bigs, he'll play more and more and then bam.  Can't keep a bat like that down.

Hope it's sooner than later.  Neither Aoki nor Smith, maybe not even Lind, hit well enough to keep this kind of production out of the lineup.  You don't sit a 40-homer player.

I still like Smith but Aoki can go away any time. It would be different if he was a good defensive player but I actually think he's worse than Smith out there. At least he looks worse. No instincts and a noodle arm - he could get away with that when he was a .360 OBP guy but he's not there anymore.

Anybody got any idea why they're so married to Loki then?

Or is he going to suddenly vanish in a puff of smoke in next week's shakeup?

Enjoying the herky-jerky ... er, dynamic ... way in which the roster gets morphed on zero notice.  Think most of us agree on what the next herk and jerk oughta be.

Sorry to have to post it here but I haven't been able to get the chat box to load for a day and a half now. Most of the time is just remains a grey screen and the rest of the time it just keeps saying attempting to connect, reconnected, error... over and over again. Tried on mobile and laptop, Safari and Chrome. Nothing. It has been like that for maybe a week or so, but usually after several attempts it will finally load properly but not now. Not sure if it is just me but would be great if it could be sorted.

Sorry for the inconvenience Gnatto.

Lot of us denizens are a little sheepish about just how much we hate to have the Shout Box down ... :- )

it's real hit and miss.

Posted in the Shout Box

They ran into memory limitations.  Working it frenetically.  Till then we might have to :: shudder :: use the conversation threads.  If we remember how...

Watching Marte has been interesting. In a weird way, it reminds me of how I felt when Tejada came up for the A's. Not that they are the same player or anything but I remember watching young Tejada before he was an MVP-caliber player. I remember getting this quesy feeling in the pit of my stomach. An "oh no, this guy is going to torment the M's for the next ten years" kind of feeling. It was...inevitable. I get that same kind of feeling with Marte, only in reverse. I never got that feeling when Lopez and Yuni came up. But there is something about this young Marte.

He's exactly the person he's always been. In some ways that's a good thing: who doesn't want a guy who does exactly in the pros what he did in the minors?

But I don't believe in Marte's power, and I don't think he'll ever take walks.  Everything he does is utterly dependent on batting average, and that makes me nervous in people who are not Ichiro.  He LOOKS like a ball-player  He moves like one whether sauntering to the plate or running in that aggressive crouch around the bases.  But he makes dumb errors because he's not always focused and if the singles aren't falling his defense is not likely to be his calling card.

He gives me that Yuniesky Betancourt / Omar Infante vibe, I guess, where you want them to be better than they actually are.  Hopefully he's on the Infante side of that scale.  If he's really a .300+ hitter in his prime, that'll be fine.  I'm hoping for that.

Diverse opinions, that makes a ballgame, er, a Think Tank

The evidence is definitely coming in on your side as to the BB%, G-Money.  For those who just joined us, Marte came up from the minors, sat down next to his countrymen Cano and Cruz, and magically started drawing lots of walks.  G predicted a mirage.  That's what's happened thus far.

As to gap power, it looks to me like he's flashed 35-, 40-double ability at several different times.  He is way too young to even be in the big leagues, so the Shandlerian view would be that --- > an early flashed ability should jell as the player's pitch recog jells.  All things considered, that's what it looks like to me.

Not sure if G was in the house when we comp'ed Marte to his HOF icons at the same age.  Gwynn, Rose, Ichiro, Carew, etc., were not doing more than Marte at age 22.  Here is the halfway tongue-in-cheek stats comparison.

Again, Marte's ability to let the ball travel deep, to read it carefully, and then snap the bat through on either curve or fastball, is the factor that Dr. D sees as trumping the other factors.  A 30% chance of real upside -- 200 hits a year -- would be pretty sweet.

Teenage doubles turn into mature-man homers, but singles stay singles.  So it's all gonna come down to those hits for me.  If Marte can hit .350+ in his prime they sure, bring on the Rod Carew comps!  Except Rod took walks, of course. I think Marte's gonna hit .260-.285 for the next few years with the potential of a .300-.310 caused by a BABIP spike.  In the minors, BABIP is more like .325 than .300 because of poorer fielders at positions they will not play in the bigs (if they get there) and no positional scouting or informed shifts.

Ketel's minor league BABIP is .327.  His time in Tacoma? Around .360.  Did he start hitting the ball with more authority then, the way Ichiro did throughout his career?  I don't think so, but it would be good for him if he did.  It's a year and a half of good BABIP luck in AAA and the bigs, so maybe it's not all luck at that point.

I don't know what the old-timer BABIP models looked like, but Ichiro has a career .340 BABIP and Edgar posted a .335.  Shifts weren't prevalent then, and you couldn't shift Ichiro or Gar anyway; they'd just go oppo and embarrass you.  Marte currently is posting a .335 BABIP as a big-leaguer.  I don't expect that to last.  If it does, I'll be fascinated to see what he does and can agree with you throwing his name around with those semi-facetious upside comps.

But if he has a normal BABIP coming his way, as he had a normal minor league BABIP, then there will be some regression afoot.  He has the quick bat to make it a legit possibility - but I'm still gonna make him show me before I buy in.

Finally figured out who Dae Ho reminds me of. Google Hamms bear images. About half way down, you have the Hamms Bear swinging a big stick!!! Its uncanny.

My parents drank Hamm's sometimes.  No idea whether they still make the brand.  Am guessing the microbreweries around here don't emphasize it.

Looks like the Hamms bear has a pretty good-sized leg kick ... 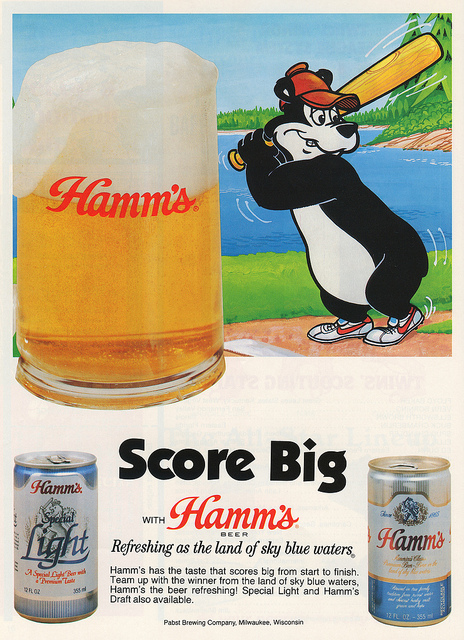 "From the land of sky blue

Having heard that jingle (to the rhythmic thumping of Indian drums), who can ever forget it?!