Skip to main content
Postgame
M's 5 ....
where did you say you saw it? 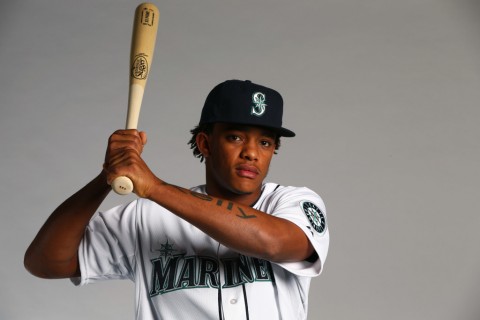 This time, happy circumstances landed us in a (Los Angels) Tony Roma's with an ... Angels game on.  Well, it wasn't on when we walked in; we started to ask "Um, can we ..." and the Los Angelino replied crisply, "You want the Mariners game on up there?"  That is precisely what the man said.  I don't know for a fact he meant it like, "You want the LeBron game on?" but why rule out the possibility.

When the Mariners win a game, I wanna go wallow in a postgame read, bask in the victory.  Particularly the pesky rodent Angels, we need a quiet spot from where the blood can be licked and savored.  If you know of such a place, do tell.  In the meantime this one is directed to baseball dorking.  "Serious journalism" advocates are directed to Salon.com for the morning.

We're 8.5-and-8, the half being that we're sitting on a Felix start.  All right, show of hands.  When the M's were 2-and-6, had just been laid waste by the Orcs in straight sets and then we stumbled woozy into a couple of Ranger uppercuts?  How many of you guys would have taken a 50-50 bet that the 2016 Mariners would never see .500 again?

Grizzly will fess up.  That's 'cause he's the only one disassociated.  I bet about 80% of the class is refusing to meet the prof's gaze at this point ...

:- ) It's April 22 and as far as you knew, the season was gonna be over by this morning.  Instead, here we are.  Felix tonight and then go for the sweep on Sunday, babe.  Woulda been a long wait for DangeRuss from here.  RESPECKT it.

Cruz' two-run shot was in the front row of the straightaway left field bleachers, where even Dr. D can hit them.  Cheapest home run you'll ever hit at 108.9 MPH launch velocity.  Seth Smith hits exactly one home run per season to leave that kind of vapor trail.

We hope the incoming missile hit a pesky rodent Angel fan right in the souvenir beer cup.  Collateral soakage radius, four meters.  Hope they all had designated drivers for the mournful ride home.

What had occurred was, Scioscia put a lefty rodent in there (forget his name) and it threw 8 straight pitches inside.  Didn't want to let Cruz extend the brawny arms.  Then, on pitch 9, with Cruz' nerves frazzled at the sight of the rodent's deft scurrying from side to side, it tried to bite the Boom with a cunning ladder fastball.  NO one and we mean no one can resist swinging at that, not in that count and after that sequence.  :: shrug :: Just the pesky rodent Angel's bad luck that Jack Zduriencik likes RBI men.

Think it was three games ago that Dr. D questioned Adam Lind's "Blue Funk."   Since then he has 5 hits, a walk, and a huge sac fly RBI in just 11 at-bats.  Therefore, we now question his commitment to making the world a better place.

True, the chatter now starts up again about Lind needing consistent at-bats.  (If Adam Lind can't hit in 4 games per week, how can you expect the for'nur to hit in 2 games per week?)  But annoying MLB(TM) Entitled Vet chatter or not, the M's could use a 100-RBI* man in the 6 slot.

Gotta admit, I had written the game off by the time Street came in.  Lo and behold, Marte with his second base hit and Gutierrez with that wait-on-the-ball timing to lace one up the middle.  For a few minutes it looked like Spring Training again, with the middle of the order knocking down walls and the "lengthened" lineup contributing its tough runs.

Inquiring fans want to know what Marte's average is doing below .300.  Dr. D continues to insist that he is covering the zone back-to-front, waiting on the ball, as with his little arm-swing single to left field earlier in the game.  Hey, you realize the kid has still played less than 81 games in the bigs - James' rule of thumb is that a National League veteran needs about 90 games to adjust to the new pitchers in the American League.  Takes experience before you can anticipate.  Man, two weeks and we're talking Chris Taylor?  :- )

Relax, dude; if Marte had a troublesome season it would be understandable.  But what we've got so far is two weeks of low BABIP and a young kid trying to figure things out.

... if you ever get a major league managing gig, you will thoroughly enjoy it when --- > it's the 10th inning, and you pinch-hit, and your guy lines the game-winner up the middle.  At such times nothing on earth will be capable of increasing your bliss.

Also, how's the bullpen doing?  Whose fault is that?

Ha #1:  Just prior to the to the Cruz-missile pitch, when the catcher set up away (low, too), I said to myself, "Now that's playing with fire."  After nearly a half-rack of jam pitches that couldn't get him out, no way-no how, I'm pretty sure that Cruz might have guessed away.   There's a huge momentum/swagger value to a blast like that.  Locker room is a looser/more jolly/but focused place today, I will bet you.

That one made me laugh!!

I was pretty discouraged about 2016, but your rainbows and lollipops post on our three true outcomes record to date talked me off the ledge. Yeoman's work there, Doc. A true public service. And, it had the added benefit of being more than spin, but correctamundo to boot.

Yeah, a .500 April would be just fine. I still fear that these same hitters will hang their collective heads as soon as they set foot in Safeco again. Can't really buy into a team that can't win in it's home ballpark.

Doc,  as you represent the blog at LAAAAA, be sure  to diligently scout the locals for signs of Mariner beat down.  Them not wanting to put the game on at Applebee's made my day.

Can look the prof squarely in the eye.

Check the time stamps on my Twitter feed. @saluboy. Declared the M's as pennant winners by season's end while smack in the middle of the slog. One thing Baseball has taught me over the years is that the season is loooong. Second thing it taught me is that you can't hide healthy talent for very long.

and nonattendance for the rest of the term.