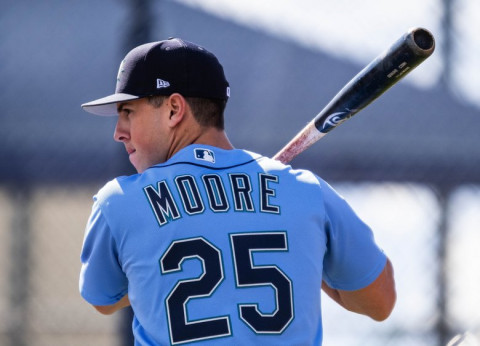 Last week Maniger sat down with David Laurilia for a discussion of hitting, and very quickly we spiral off into a Postgrad Student Lounge of deep philosophy and cigars dipped in brandy.  Here's the link.

I especially enjoyed Mitch's search for "the sling effect" but he goes into 99 ways to look at a baseball swing.  ... which, come to think of it, is nothing more than Brooks Koepka would do if you asked him.  Anyway Haniger states that his swing is different based on ... pitcher, the base-out situation, where in the game you are, and so forth -- but the LCD (least common denominator) is to get a good pitch and then to accelerate the ball as hard as possible with an easy swing.

That's a few times lately the M's have emphasized "easy swing" and I like it.  It's an animal reflex to fight the pitch with muscles, a more complex approach to use leverage.  But when a hitter uses a smooth-as-glass swing we can see it from the CF camera and no power is lost.  Vogelbach's last several HR's have been mortar shots.

Why would your swing change with runners on base?   .... why, because pitchers get softer, of course.  :: slaps head ::

What's your timing mechanism?  The barrel TIP.  ... he stops short

Brent Stecker has some juicy quotes from Dipoto here at this link.

Dipoto opines that he thought the entire league was missing out on Dylan, under-valuing him on an industry-wide basis.  Here's a guy the GM felt "just needed the opportunity" and if you roll that over in your mind ... you definitely could move your ballclub forward that way, if there were enough such players.  (Bill James just stated that if you went back in time 50 years, you could very easily win the pennant with the knowledge gap we've got today.)

Specifically what Dipoto sees is "a very good defensive player especially in the middle infield" but also capturing all positions at the corners.  The second bread-and-butter skill for Dipoto is "more pop than he gets credit for."

Maybe this is another nucleus guy?

Here is the M's* news release on that.  The M's idea is to get Biddle turned around; Vizcaino is out for the year and is a FA at the end of it, so his $4.8 million is there to cancel most of Swarzak's $8.5 million.  The M's send the other $2M to Atlanta to cancel out the money, so apparently it's a true Swarzak-for-Biddle swap.

Had a big game for Tacoma and is coming back Saturday.  Ryon Healy picked the right time to hit the DL ...