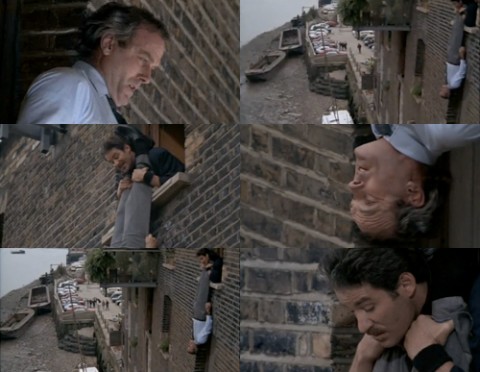 Whether Gallardo throws another game like this, is beside the point.  I definitely did not think him capable of this kind of performance.  Thrilled to see that he is.

About the 2nd inning, Gallardo's fastball had you sort of blinking.  He was using a very high front side, glove in the release area, shoulders connected to the CF very well ... well, he's always come over the top, Tall and Fall rather than drive and drop.  But today he seemed to be throwing downhill, getting nice vertical bite.

Time and again he would throw the glove up there, crest the roller coaster and then the fastball would angle down to nip the knees.  Boom, 91 on the grid, overlaying the bottom line of it.  Then he'd bring it up over the zone, effectively wild, and they'd sucker for it.  It was nice.

Brooks confirms.  Gallardo was throwing a 92 MPH cut fastball, good gloveside tuck, and this underlined the fact that he was --- > changing the eye level.  Pitching up and down the ladder, as opposed to trying to paint the outside corner.  A fadeaway would have diluted the effect.

So then the couple of paintballs he did throw, those were like Fastball #3.  He still did not have great command, but you do NOT have to be so fine when you are pitching up-and-down with gloveside bite.  The fastball was (relatively) weaponized for him again.

And then his breaking pitches were portioned AWAY from the slider that Dr. D dislikes so much.  He threw 17 yakkers -- have always liked those -- for a -1.04 run value.

He threw 23 sliders, which did get hit around for a +0.72 run value; three of his four hits were off those little sliders.  But the point is that is 4x pitches with a fastball that was respectable.  He got 5 swings and misses off the sinker; he got 2 swings and misses off the 92 MPH cutter.  He got 2 whiffs off the curve, another 2 off the changeup, 4 off the slider.  That's 15 whiffs (!) and they were distributed across 4 pitches.

Mercy sakes alive, he was pitching in the John Lackey template.  Not at the top of it, mind you.  But it was workin'.  If he did it again it would work again.  Could it be that Mel Jr. directed Gallardo to the "change eye levels" shtick with the fastball?

He Who Must Not Be Named, that shtick was always predicated on --- > "unless Dipoto knows something about his arm bouncing back."  What Dipoto SAID was that Gallardo is savvy.  Savvy and those 2016 mushballs get you a 4:3 control ratio in the American League.

Gallardo's control ratio was 85:61 last year.  It was who knows what in Spring Training.  It was 9:6 in eighteen innings this year.  But Sunday that control ratio was 7:1, against a good and left-handed lineup.  That's 'cause he threw the ball way better.

The M's uniforms, and Zoom, and especially Malcontent, have been saying he's capable of throwing the ball fairly decent this year.  Sunday they were way right.  I'm up for more of the same, you?

About five batters into the game...

Hey, I was as down on Gallardo as anyone, but I'd be happy to be proven wrong on this one...yesterday he *definitely* threw the ball well...as in...VERY well.  A little wild, but every pitch had movement on it and the movements weren't all in the same direction. The mushball slider even had more drop to it than normal.

...I want to see that play out a few more times, before I'll invest any emotional hope into a Gallardo start. Especially after the first three.

Love The Taste of Crow

Can't wait for it. It's now fairly plausible that I was wrong about Gallardo and that is fantastic news.

...this season (which happens to be the number Iwakuma has faced), here is where the Mariners rotation ranks by scFIP (their FIP adjusted by statcast-normalized home-run luck).

I'm not adding him to my fantasy team or anything, but that's objectively passable MLB starting pitching from our #5. Now we just need Felix to figure it out and import a 1-2 Andrew Moore-types to round out this masterpiece.

The Mariners are pretty clearly having Gallardo throw high now

For practically the first time in his career (The first time anywhere near this level since 2010!), Yovani Gallardo is throwing at the top of the zone aggressively with his 2 fastballs.  Similar things are true of his Slider.  His change-up is new and improved, with a higher level of aggression and confidence than previous seasons it seems.  He still isn't getting the bottom of the strike zone like I want, but he's making things work anyway.  Don't miss the incredibly low exit velocity he's allowed over all 4 starts this season, yesterday wasn't a fluke.

the other amusing thing...

...with all this pitching up in the zone, his GB% jumped from terribad to...above league average??? (almost 50%)

Yeah, the Mariners certainly bought on the FB% increase being OK

But maybe the extra Vertical torque on his fastballs has got the batters swinging consistently high?