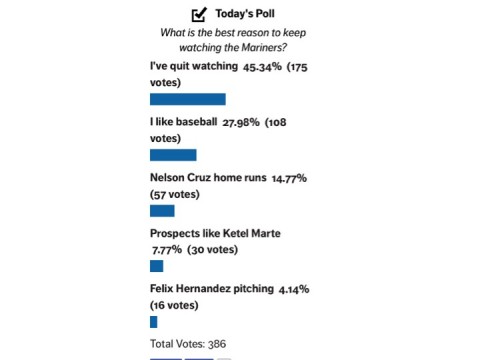 Top image is from the Seattle Times.  The marketing department was able to begin planning on a Nellie Nest out there in the upper deck, but they left out a buncha stuff:

1.  Opportunity to squeeze an article out of a 7-2 loss while re-listening the classic One Hit Wonders on YouTube

2.  Of all the baseball teams extant, Mariners are easily the most geographically convenient

5.  M's are to baseball what SSI is to world journalism

7.  If Jesus Montero will keep running under the stands for no reason, shoot, we can at least climb up them for no reason

Bill James once said that it was possible for him to forget about baseball during a movie, but it had to be a really good movie.  Face it, bro's, you'll be on baseball the rest of your life.  At least we can say we watched it develop.  Granted, "it" might be an eleven-season string of 100+ losses.  But then again, "it" might be Kenny Williams brushing the lint off the lapel and sitting back to enjoy his championships the way Bill Stoneman did to Bill Bavasi.

For a few more days, we can watch in the hope that the hot streak begins.  After that it is strictly "Can You Win Your Next Pennant With This Player," notably:

Hisashi Iwakuma is a ballet unto himself

Jesus Montero might be able to fight his way past McClendon with a couple of bo sticks, and then we're golden

Could be Nelson Cruz will OPS+ two or three hundred.  Don't tell me you ain't interested

The Edgar has The Trumbo back in Trumbinator form ... which makes him a viable candidate for Williams' first trade

I don't really have any choice other than to watch the Mariners, when they're on, and after game 162 I'll sink into a self-reinforcing melancholy.  Granted this is preseason 2016, but there still a lot of goodie you can get out of it.

We were second in line for Dombrowski, did somebody say?  So the regime change rumors are gathering steam?  Hey, like Grumpy said, there's a whale of a talent pyramid here.  Remember when the Nationals were mortal locks to win 107 games?  They've got Strasburg and Fister hurt, they've got Yunel Escobar as their only decent hitter behind the Kid, and they are 59-59.  You thought we were underachievers.  Baseball's a funny game.

"classic One Hit Wonders on

That gives me a great idea for a non-sports guest article.

Especially from DaddyO.  But all y'all know who you are.

Today's my last day at the keyboard for 5-6 days.  So we can be confident of a glorious Mariner rampage.  Those of you who can help fill in, please go nuts.  3 articles/day would be nice, but we'll settle for two.

FYI, I started running down

FYI, I started running down by year some of my favorite one-hit wonder songs with YouTube links and comments. I'll probably post it in installments over time, first installment soon. Hopefully it will be entertaining for those who like music and either remember these songs or have enough curiosity to check them out.

"But then again, "it" might be Kenny Williams brushing the lint off the lapel and sitting back to enjoy his championships the way Bill Stoneman did to Bill Bavasi."