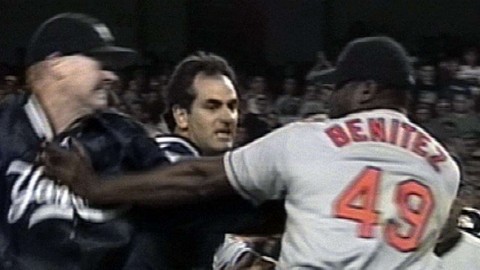 Jason Churchill had an interesting take on Thyago Vieira, that he is likely to start at AA "and move quickly" if he fulfills certain conditions.  The Mariners have been prone to this idea before...

Ryan Divish wrote Vieira up a couple of days ago and the quotes are can't-miss stuff.  I especially liked the ones to the effect that Vieira pitches "violently":

“It’s intimidating,” said catcher Tyler Marlette. “He’s a really big dude and he gives it his all and he’s coming at you with every pitch. It’s very violent. It’s very nerve-racking for hitters. I think that’s what makes him so effective.”

Ask a fellow pitcher in the Mariners organization.

“The fastball comes out of his hand a little differently than most guys,” said reliever Emilio Pagan. “And it’s a not a straight fastball. It’s sink at 102 mph. It’s pretty unfair. He’s got a lot of moving parts in his delivery. I wouldn’t want to be in the box against him that’s for sure cause he’s also got an aggressive attitude to him too. It’s a very commanding presence on the mound.”

With the Mariners it always seemed like it was the other guys who had S-C-A-R-Y people in their bullpen.  Back in the day I used to be fascinated with Armando Benitez and Rob Dibble ... the medical chopper idled out in the parking lot in case either one "lost control" of a 100 MPH bullet, either accidentally or not.

Not every 100 MPH reliever winds up closing.  The Mariners insisted on seeing for themselves whether Arquimedes Caminero was all that the Pirates didn't crack him up to be.  It took what, two maybe three weeks for the Mariners to sour on Caminero.  Why?  Caminero fell behind guys and then centered them up.  98 MPH down the middle is fine as a first pitch; it is not fine on a 3-1 count.  It's also not fine with two walks on base.  It's also also not fine if you are a "comfortable" 100 MPH, relatively speaking.  The whole point on Vieira is his chance to pump gas uncomfortably.

But for all that, it's not like Caminero was a lost cause.  He is an average-mediocre big league pitcher who represents, pretty much, the floor for 100 MPH throwers.  There are guys who do good at 100 MPH, too.

But most of Divish's article attends to the question of coaching.  Last week we read an article -- was it on Mariners.org? -- which accused all of baseball as "raving" about the Mariners' new focus on individualized player development.  As opposed to "my way or the highway" technical coaching, you know, everybody throws a circle change here, that kind of stuff.

In chess it is axiomatic that --- > one-size-fits-all teaching is fine.  Until you get good.  And then you need a personal coach who can fit his advice to your personality.

So, obviously, we can plan on the Mariners setting up a contending bullpen in the first half, and then adding Armando Benitez in the second.  Heh!

And then watching some videos put me off of my desire to add to the bullpen.   I've been thinking that with him in the wings we're adequately stocked.  The pile will get bigger but it's likely we've already got the opening day bullpen in house now.