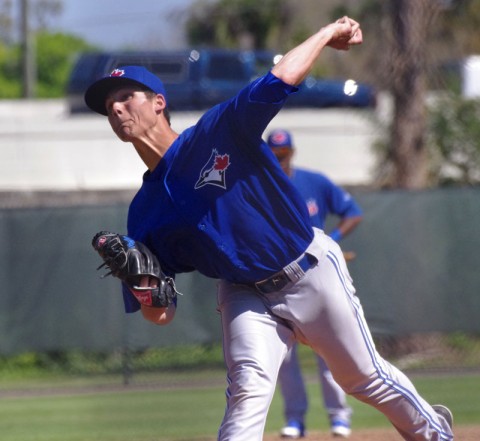 And the text commentary,

Last week, he was named the Appalachian League Pitcher of the Week after firing a 6-inning shutout* with two hits, no runs and 8 K's.  He just turned 19 and has a Three True Outcomes of 31 strikeouts, 11 BB and 4 homers in 32 innings pitched, so 8.7 / 3.1 / 1.1.  Billy Beane would be kewl with a gangly lefthander at this slash line, but Baseball America wasn't kewl with putting Wells into its "Top 15 Jays aged 25 and under" list.

26-year-old Rob Rasmussen has had 12.1 innings with the Jays the last two years, with a 10.2 / 5.1 / 0.7 jumpoff.  Here are his pitch types:  93 MPH fastball and either a lefty curve (2014) or a lefty power slider (2015).  By the look of things, the Jays had just swapped out his starter's 4-pitch arsenal for a conventional LOOGY arsenal fastball-fastball-slider approach.

Here he is grounding out David Ortiz in his ML debut last year.

Jake Brentz is a 20-year old lefty in the same rookie league, minus the production.  Don't even ask about his statline.  Nor whether he hit BaseballHQ's radar for this year.

Interestingly, he shows up on YouTube with a Mike Montgomery throwing motion (couldn't find Wells anywhere).

Perfect Game said this going into 2014:

We’ll put this in the most simple manner possible. Left handed pitcher Jake Brentz is one of the more unique prospects, with one of the most unique resumes, that has come across the high school baseball prospect scene in the last two decades.

Brentz was recently moved up to the No. 8 position in the Perfect Game 2013 class rankings. The Perfect Game staff takes class rankings very seriously as an evaluation of our own opinion on the relative merits of a particular player. The next five players in the rankings are Reese McGuire, Jon Denney, Justin Williams, Ian Clarkin and Trey Ball, which pretty much says what needs to be said about what Perfect Game thinks of this Missouri based left-hander’s potential.

.... and that he "recently set a record for a LH" by hitting 97 on the radar gun at one of their events.  JaysJournal.com has a nice deep article on him, claiming that he sits 95 MPH and getting up to 96-97 MPH:

With Brentz right now it’s all about the big fastball, sitting in the mid 90’s and getting up to 96 or 97mph. Coming from a left-hander thats the sort of fastball you can dream on, he is also working on a curve and a change-up but both secondary pitches are still along ways away from being a consistent weapon in his arsenal.

Brentz is the definition of a high risk high reward draft pick, although some of that “risk was mitigated by him being picked in the 11th round. While the projectable frame and big fastball from the left side are all things an organization dreams of in a pitching prospect there are still a sea of question marks surrounding his trip to the major leagues. With Brentz being only 18 years old and new to being a pitcher his secondary pitches as well as his command, consistency and delivery are all extremely raw at the moment. Putting an ETA on Brentz at this time would be foolish as he still has a load of development ahead of him over the next few years, however if his secondary pitches can be developed he has a ridiculously high ceiling and could be a top of the rotation arm for the Jays way down the line.

This is what they were saying about the minor-league Randy Johnson back in the day, that he had nothing except the huge fastball but --- > the sheer velocity could get him to the HOF if he could ever harness it.

So, if we're trying to make sense of the deal, the trade looks to be sort of a poor-man's grab at a Randy Johnson / CC Sabathia lotto ticket.  With an ML-ready (mediocre) reliever to replace Lowe for the here and now, and a rookie-league LHP starter that the M's liked into the bargain.

So the M's are calling Uncle on 2015, as they should be doing after the DBacks series.  Looks to me like the Blue Jays wanted Mark Lowe pretty bad.  Don't blame 'em.  They're +100 runs differential with a .500 record and they gotta be thirsty for some results.

What the doctor ordered

For all that's said by the Jack detractors (does that make them 'de-Jack-tors'?), the one criticism that seems lacking is the bareness of the cupboard in pitching.  This move (and Ramirez) helps us replenish.  Hultzen isn't the only high pitching pick ever to go down...and we've had a steady stream of arms (either drafted or signed at close-out prices) move through the bullpen, and on in trades.   And I don't know what you say about an organization that loses a promising young arm to a boating accident (the nautical corrollary to Nick Adenhart?).

But fixing the bullpen had to be near the top of the to-do list for next year.  If there's truth that Lowe may prefer to resign here, that makes a great start.  In any case, I'm glad we're not waiting until winter to start working.  Over the next two months, looking at some of these arms...and Montero...and Marte...and maybe Flores...sort of seems like it puts this season behind us, and let's 2016 begin.

It's not that he got hurt. It's that we used a #2 on him in what's proven to be an extremely deep draft.

Here's an overview at baseball-reference.com.  Right next to the "position" column is a WAR column, total contributions to date in the majors.

Still, I can't bust the M's for Hultzen.  I liked the template when they got him and would have signed off on the pick.  That said, we haven't exactly gotten Milwaukee Brewers returns out of all these sky-high picks.

To me, it just felt like a 'safe' or 'like' pick, similar to Josh Fields or Brandon Morrow or Jeff Clement.

And it feels like the M's totally bust those all the time.

I've never seen as many M's media types say "watch for Lowe to come back next year."  It was actually getting weird.  Let's hope that there's a clandestine understanding there, "Hey Mark let's get you a chance to pitch in October but we will be strong bidders" wink wink...  that said, it's awfully easy for a guy like Lowe to get attached to his new mates in Toronto and for them to be first with the contract offer ...

Other teams do this. Why not us?

...there's no evidence this would help?

(This is provocative and probablhy premature.  But what would really make the players play better? )

The M's fired Bavasi midseason, if I remember correctly.

A very genteel baseball town.  This entire act would never have gotten off the runway on the East Coast or in LA.