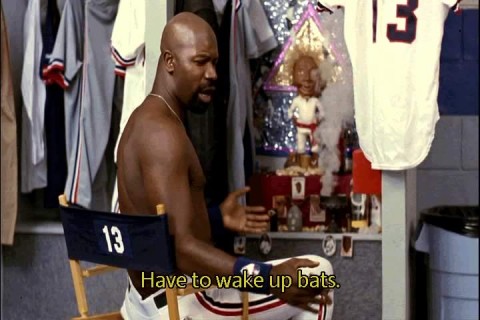 gnatto:  I can actually see them moving themselves all the way up to one spot out of the #Wild card. No chance they pass the Angels or Yankees in the #Wild card spot though.

:: broad smile ::  Hey, they're -6 out of the Wild Card in early/mid August.  MLB.com has their postseason chances at 3%.  As Duke Leto the Sandworm told his gentle Hwi, "How sweet these last few sips of humanity are."

Why not enjoy the series in Boston?  What's the penalty for doing so?

DaddyO:  It was recognized back in June that August would be the M's best month to make hay. It will be a minor miracle for them to make up the 7 game deficit to .500 by the end of the month. Personally, I don't think it will happen. If it does, then a minor miracle September might get them within reach of possibly maybe perhaps being in the hunt. That's the hole they have to climb out of. Don't hold your breath.

If he had been Dr. D, DaddyO would have said something more like, "It was me, myself, I who prophesied this run.  Are you not entertained?"  Instead of that, DaddyO murmurs in the passive voice, "It was recognized."  What is THAT all about?!

But sadly, he follows up this called shot by trotting around the bases and, in grand Ted Williams tradition, spitting at the crowd.  Keepin' it real, Daddy.  +1

Mojician:  Is it just me or have the Mariners have played better since Dustin Ackley left? It seems like they win better, they lose better, they are calmer and try harder.

Mojician also with a Nostradamus-like quatrain:  earlier, quoth he, the M's need perform two tasks to align themselves against the Hister.  Shedding Ackley was one, but Dr. D forgets what the other was.  Whatever it was, the M's musta done it.

MtGrizzly:  Just saw a close up picture of Felix hugging Iwakuma after the game - Felix with a big grin, wearing a blue fleece bear hat. Perfect.

Dr. D watched the whole tape in order to pick that image out of the 120MB.  It was there.  Muchas gracias for the alert.  And did you guys realize how LIKED Hisashi Iwakuma seems to be?!

EVERYBODY threw crumpled Dixie cups at the suggestion we watch Marte for a couple of weeks.  LOL!  That's when Dr. D is in his element, when everybody thinks he's crackers.  You want to offend against the Jobu Burial Grounds at Detect-O-Vision Yards, it's your funeral.

And that's what makes SSI what it is, but ... you guys DO remember that Unkle Dok introduced you all to the concept of "no ISO = no BB"?  What's next, you scolding Dr. D that he should recognize the possibility of NPB pitchers succeeding here?!  :- )

First of all, Marte hasn't walked in the minors too much yet.  He's been fifteen years old, too, I notice.  Walks are an old players' skill.

Second of all, if there are three balls, the pitcher can miss.  Think about it.  (Like, it happened to Marte just tonight.)

Third of all, Ketel Marte has the ability to track a slow curve with ease, while also fffflllllicking a 95 mph fastball out of the catcher's mitt, foul.

Fourth of all, if you're going to argue that it's *impossible* to draw *decent* walks without ISO, you're going to lose.  Unkle Dok has tried to teach you, repeatedly, that general principles seldom lend themselves to dogma.  But he loves you all the same ...  The last three years inclusive, there are 10 batters who walk 7-10% of the time with ISO's under .100.  Nori Aoki, Alberto Callaspo, Nick Markakis oh by the way has had no power for a LONG time, John Jay, and several guys.  Go ahead and invent 10 reasons to exclude all 10 if you want.  It's a free country.

So cheer up.  There are worse things than finding out that your 21-year-old shortstop might be able to play in the big leagues.

OBF:  We don't actually know what the M's plan is for payroll. They're locked in to Felix, Seager, and Cano. We know that.

... oh, and Paxton and Taijuan are locked in, right?  Four aircraft carriers and some exciting talent behind them ... on paper it's good enough. Somebody sacrifice a bucket of chicken in the locker room and clear this curse.

"If he had been Dr. D, DaddyO would have said something more like, "It was me, myself, I who prophesied this run.  Are you not entertained?"  Instead of that, DaddyO murmurs in the passive voice, "It was recognized."  What is THAT all about?!"

Astutely, ya got me pegged, Doc.

It is truly the case that I had to edit my words several times before finally deciding on the passive voice as the best way to eliminate any vestige of an "I told you so" tone. I mean, why strut around like peacocks when all we are is men endowed with gifts who get it wrong as often as right (witness my crow sandwich comment in the other thread)?

'Tis The Endower who is truly worthy of primary admiration. Any acclaim due us is purely secondary. Naked we came into the world, naked shall we leave it. I suppose that's why they tell new public speakers, in order to overcome nerves, to picture their audience in their underwear. (Seduced males: not like THAT!). I wonder if maybe they should picture THEMSELVES in their underwear as well?!

Of course, the initial urge to cry out "I told you so!" speaks volumes about the condition of every man's heart, most definitely including mine. The grass withers, the flower fades, Babylon rises, Babylon falls, but the word of the Lord stands forever.

Oh, Sons of Men, Save Up Your Souls,

And Taste the Still Wine of Peace.

For Tomorrow the Earth Will Claim You;

But the Fair Things You Do

On the Red and Fiery Day.

From Inscriptions at the City of Brass, one of the Tales of 1001 Arabian Nights; Powys Mather translation

Thanks, Bat. True story. When

Thanks, Bat. True story. When I was a kid I thought the Tales of the Arabian Nights were about Arab mounted soldiers clad in chain mail. I was an A student, well-read for a kid. Go figure.

I had read some of the tales (Aladdin, Ali Baba, Sinbad) as a kid, but while I was in the Navy, each deployment I would pick some group of works to read all the way through. My first deployment it was Shakespeare, my second the 4-volume Powys Mather translation of the 1001 Nights. And on and on (complete C.S. Lewis, complete J.R.R.Tolkien, complete Sherlock Holmes, complete Dickens, Ray Bradbury, etc.). Good way to settle down for sleep after a night watch, though, and made a six-to-eight month deployment move along. My Grandmother was an English prof with an interest in fantasy/scifi, so I learned about Tolkien and Lewis in the 60s.

The gear-shift from Shtick to Real-World Philosophy

Occurred far too suddenly for Dr. D to maintain his bearings.

But yeah Daddy.  Every word a pearl.

I think it is the speed thing that Lloyd likes in Marte:  He's this years James Jones.  Earlier this year, before he had played there, I was calling for Marte to get some CF time in Tacoma.  I'm glad he's got it.

But he has to have a signifcantly better CF glove than Flores (for example) for him to be the better option, unless he's a .280+ hitter.   I like the fact that he's a tough out (but the emphasis remains on "out" right now) and I like the flexibility he brings.  Nobody has been more adamant about the M's lack of flexibility.  With all that, he is a terrific Willie Bloomquist....one with speed.

I'm not betting that Marte walks 9% of the time, as McLemore did......but McLemore did, and without any pop to mention.  It can be done.

Marte is even more flexible in that he switch hits without much (or any) split differential.

I like the kid more as a SS, but not enough to move Brad Miller off, and I'm not sure I like him enough to move Chris Taylor out.  Will see, on that.

I'm not enamored with an 82 OPS+ Austin Jackson in CF.  More of that from Marte (as a fulltimer) isn't any more interesting.  And I would rater see Flores establish that he doesn't have a CF glove.

As instant flexiblity, Marte is a nice player and wll worth having.  As my starting CF in '16, I'm not betting that he brings enough bat to interest me....and I'm not betting he brings Paul Blair's glove to cover up for his Willie Bloomquist bat.

Then he'll need a pretty slick glove at short to even carve out a 10th-man career.  Not sure that's what he has.

Kid needs to hit.  But then again, a lot of 21-year-olds who are at his level wind up climbing a couple steps higher...

MtGrizzly:  Just saw a close up picture of Felix hugging Iwakuma after the game - Felix with a big grin, wearing a blue fleece bear hat. Perfect.

Dr. D watched the whole tape in order to pick that image out of the 120MB.  It was there.  Muchas gracias for the alert.  And did you guys realize how LIKED Hisashi Iwakuma seems to be?!

Not only that but how great a teammate Felix is. The look on each of their faces when Iwakuma sees Felix and processes the presence of the bear hat on Felix's head was a precious moment.