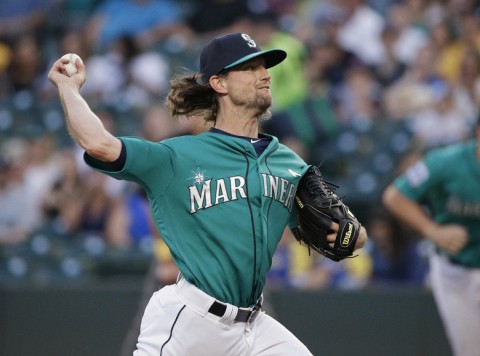 Tuesday, he faced an Angels team overly-familiar with him and coughed up 11 (!) hits in 4 innings.  This drove his ERA to 4.36, his ERA+ to 91 and his FIP/xFIP are no different.  His 5.5 strikeout rate is way under budget, but then again his SwStr% is 7.9%, well ahead of his lifetime rate.

Greg Johns, in his Mailbox, reiterated that the Mariners will indeed go to a 6-man rotation in August.  Marco Gonzales has gone from 40 innings in the majors last year, 126 overall, to a prorated 190 this year.  Paxton's up from 136 to 210.  Wade LeBlanc, from 68 IP to 150.  Bear in mind that Ron Shandler's #1 question for asking about a pitcher's durability this year, is his innings increase last year.

It's one of the biggest reason that the M's are 57-35 this year - no missed starts.  Dipoto could feasibly complain that last year's result would have been similar to this year's, if only he'd have had escaped the DL pain they got in 2017.

Similarly in the Mailbox, Johns predicts an SP trade or an RP trade and/or both.

Doesn't make any difference to you or me that Haniger goes for 32 HR and 114 RBI and makes the All-Star team.  Nor does it that he'll have 4.8 WAR, in a year when his D and running are slightly negative; we knew who he was last year.  But it makes a whale of a difference in the national press, who will now view him as Jayson Werth.

A huge performance in the All-Star game, a strike-out-the-side type inning with 100 MPH fastballs from a pumped Diaz, will have its effect in the national consciousness, too.

2.  That's purty much it for position players!

4.  If I were Jean Segura, I'd be a lot happier with this photo than I would be with an All-Star appearance I didn't fully deserve (there are players better than him on the Last Call).  Where's that photo ... the one where he came out to the plane, and everybody on it had a Send Segura T-Shirt.  LOL!  Now THAT was a MegaKudo.

Johns also laid it out neatly that the Cano "addition" will be similar to a deadline trade, even if he can't play in the postseason.  With a .385 OBP and a 133 OPS+ as an infielder, he could be the best player "traded" on July 31.  His tentative return date is August 14.  So take that, Orcs.