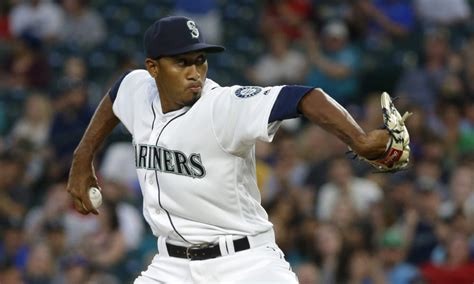 Q.  Would the M's be in Panic Mode if they'd lost Sunday's game?

A.  I saw this in three major places, different major places, so I guess it must be a sentiment with some gumption to it.  Let's see, would mean old Dr. D need to bust out his yardstick, and go "do a study of" (actually, grab several examples of) 93-win teams losing 3-of-4 games at any point in their seasons?  Or merely saying it out loud, can we cashier this one right away?

Personally I do believe in this team.  Stepping back to "thumb-view" the painting from three steps:

2) Wrecking crew for the 8th and 9th innings, Closer and then Mega-Closer

But I'm sure that it's 4) that has people not believing in the ballclub.  Ah, well.  Even with just the first three, we'd be big faves for a WC game and that's Paxton throwing that game.  But me, I'm leaving 4) on the canvas as well.

Returning to home plate, if the M's did stumble into a 10-of-13 loss stretch, they'd still be fine.

Q.  Paxton's game.  Is it really possible to "make only one mistake"?

A.  We've mentioned before, if you look at scatterplots much? it is impossible to think of pitchers as centering only one pitch per inning, much less per game.  Here's Wade's last night.  He only made 21 mistakes, I guess.

But Paxton's game was (1) the closest thing we'll see to 97 great pitches and then one lame, high foshball ... and (2) a good reason for why this cliche' should be reserved for rare games, the games when superstars give up one big hit, as opposed to being used for every game all season long.

A.  I loved his comment after the game, the 2-run shot to RF, "I'll let them take their chances out there."  Head to M's.com for a good interview. Jeff Fassero broke out of an early-season slump this way one time, "I had forgotten to pitch to the ballpark."  LeBlanc is such a brainy guy.

No, he had a good game, taking them front-to-back of the zone and no runs other than the two decent HR's and the one odd HR.  His CTL was 3:0.  The three specific pitches for HR's were:

TO CARGO:  0-2 change, middle-middle, just missed with it.  TERRIBLE pitch

TO STORY:  0-0 fastball, 1 baseball above the knees and centered, taken out to RF.  GOOD pitch, take a million of 'em

A.  You know, somebody said "Worthy of All-Star CONSIDERATION" and that caught my fancy.  Which guys MIGHT make the All-Star team in SOME year SOME time.  Just noodling...

DEE GORDON possibly as a gold glover SB man but did you know DENARD SPAN has a 123 OPS+ for the year.  Span no, but still.

PAXTON and SUGAR of course, COLOME quite feasibly if he'd stuck with Tampa.