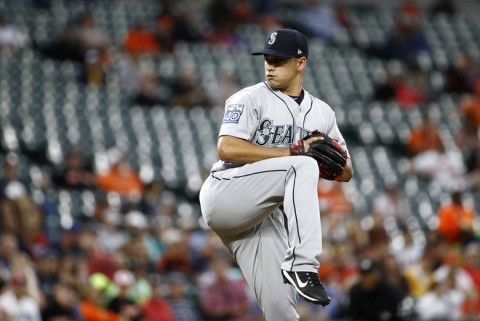 Trevor Cahill took the mound and blanked the Twinkies for the first couple of innings while the A's took a 2-0 lead.  But in the middle innings, the Twins ralled.  Two walks and two singles tied it 2-2 and then in the next inning, two more singles and then a blast to CF by Mitch Garver put the Twins up 4-2; Joe Mauer singled him in and it was a 5-2 lead the Twins hung on to.  Bringing us to

Tonight the M's go up against the 71-56 Diamondbacks, with the matchups being Erasmo vs Zack Godley (13-6 despite a 4.44 ERA), and two TBA's against Robbie Ray and Zack Greinke.  In this article, Jerry Dipoto gives updates as to the pitching staff:

1) Marco Gonzales will continue to get very long rest between his starts.

3) Felix is back in the bullpen, perhaps not by the M's choice but more out of need:

“I think you have to be encouraged by what you saw for the final 12 or 15 hitters he faced. We saw him more aggressive down the slope of the mound, I thought the ball was coming out of his hand with a little more crispness than what we had seen for most of the season,” Dipoto said. “I don’t know if that was due to a little bit of extra rest, if it was due to something that he learned down in the bullpen. … Perhaps it was wanting to show somebody that he still had it. It was certainly an improvement.”

Dr. D will continue to stick with his "fear of failure" story.  We'll see what Felix has left in him the rest of the season.  Scott Servais chimes in,

“I thought the last three innings the other night (were) the best I’ve seen Félix probably since early in the year, maybe in the Boston game,” Servais said, referencing a June 14 game where Félix held baseball’s best offense to one earned run over seven innings. “… Later in (Monday’s) game, because he was doing things right mechanically, it was ticking up or it was holding his velocity at 91 mph – there were even a couple of 92s on the board. It’s not all about velocity, it’s more about the location with Félix, but when (he was) doing it right mechanically, he was getting great results. He didn’t have the great changeup the other night, the curveball was OK, but the fastball location was something we hadn’t seen in a long time