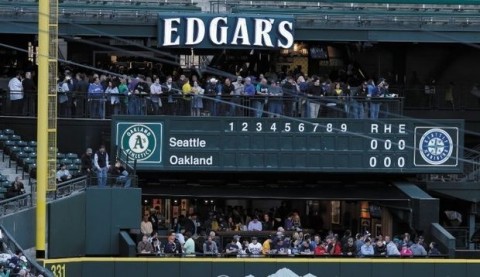 Haven't read a thing about Edgar's hiring, other than seeing it in the Shout Box.  On principle.  At SSI you know you're going to get a lot of naive shtick that misses a lot of obvious points, but at least it's not yesterday's soup warmed over :- )

If your reaction to this hiring was ANYTHING other than "HOW COOOOOOOL!" then you want to go home and re-think your life.  At least your baseball-viewing life.

No, seriously.  You're a spectator.  You don't have to fix anything.  Your solutions are irrelevant.  So, unfurrow your brow.  There's a great game goin' on.

SSI hereby demands --- > that when Nelson Cruz hits a ball into Edgar's Cantina, that we be clued in on the bench jokes.

There are very few ML hitting coaches, ever, who were batters of Edgar Martinez' stature.  The problem is simple:  you can't get Ken Griffey Junior to hang around and do what You wanna do.  Much less work for you.  (?!)  Jay Buhner is in the booth all the time because he is the ex-Mariner of greatest notoriety who wants to hang around.  This ain't the Yankees, ya know.  (Nothing against Bone.  He was one of my original Adopt-a-Players.  Love the guy.)

So you CAN get authentic Legends Of The Game to work with your players -- not "stop by and share a tip," but to systematically report for 12-hour work days?  Dr. D's impression is that your Legendary Hitter will do extremely well as a batting coach, for about three or four years, at least.

For example, Rod Carew deigned to serve with the Angels after retirement and my understanding is that he produced a bunch of Garret Andersons, Tim Salmons, Jim Edmonds, and so forth.

Ted Williams was absolutely legendary in this regard, when any team could get him to hang around their hitters.  (Dunno if he ever actually took the job formally; he managed a bit.)

Frank Robinson used the job to step into fulltime managing (I think), as did Lloyd and Lou.  Not that you expect those last two to compete with Carew, DiMaggio, Edgar, and Teddy Ballgame.

I believe that those five men, with Edgar, are now the best hitters ever to serve as batting coaches.

From section 339, here are the (first) three great things about having Ted Williams or Ty Cobb or Edgar Martinez serve as your 12-hours-a-day hitting coach:

On that last:  at a bare minimum, it is a reboot for Seattle hitters, an excuse to say "A'ight!  Here we go!"  As Jim Bouton put it, "Once a hitter thinks his slump is over, it is."  But now we're going backwards.  Edgar is not a cosmetic change.

One other random thought:  Edgar, a righty, hit superbly well in Safeco.  He hit .300/.400/.500+, adjusting a bit for his fade at the end.  That would seem relevant to coaching hitters in Safeco.

Could honestly see a possibility of Edgar's being a key to help cure the Smoak/Montero/Ackley systemic problem.  The wonder is that they were able to get him to sign up.

This is interesting, and I hope it works out well. But I can't help but point out that "great hitter" doesn't necessarily equal "great teacher". There's no question in my mind that Edgar has the technical knowledge and understanding of hitting in terms of swing mechanics, positioning, anticipating the pitcher, etc. I just hope he also has the ability to impart all of that wisdom to major league players.

... will be just his sitting on the bench in-game, talking with the hitters about how the pitcher is currently throwing.

"He's afraid to throw inside if you crowd the plate."  "He can't get his curve over when he's in the stretch."  "He's speeding up his motion on the slider."  "He won't throw his changeup except as a show pitch; you can just take it."  "He wants to get you out with the cutter."  "Once per at-bat, he'll center a fastball."  Talking about dynamic observations during the game, rather than video study.

Difference a lot of times, is that the guys on the bench listen to one guy where they wouldn't another guy.

Prob'ly if the hitters were listening to HoJo, he'd still be there.  At least that's what's typical.

I don't think that Teddy Ballgame revamped swings.  I think he liked to talk about the mental game with the pitcher, how exactly you get your pitch to hit, what exactly you do with a guy who throws too hard, that kind of stuff.

I'd like to see what Edgar can do with Dustin Ackley. Ackley still has the great contact ability, but it seems like he's a mess mechanically.

I actually think the main reason most superstar hitters don't coach isn't that they are bored with the game and don't want to work for you when their career is done...but more that they usually relied on superhuman talents that most hitters do not possess.

Edgar Martinez can pull Kyle Seager aside and tell him "dude...you're swinging at way too many balls...stop doing that" because...he had the batting eye of a T-101 by Cyberdyne Systems. :)  But that doesn't mean Seager will ever learn to have a great batting eye.

Having SAID that...I do, in fact, believe that Edgar was more of technician and hard worker than your average superstar.  Babe Ruth never successfully managed because Babe Ruth was a big dumb man's man who hit bombs, not a technician.  But Edgar studied hitting mechanics...was constantly tinkering and tweaking...learning about pitchers and what they look like when they have different plans and frames of mind, etc.  He also spend two hours a day staring at plastic colored balls to make his eyes not go haywire and then another three hours a day hitting and lifting and another hour a day rehabbing his constant leg problems.  And then played the games. :)  So...he can be in the clubhouse and see who the ones are who aren't working hard enough...he can figure out who needs to get their eyes checked.  He can make tweaks to their approaches and they'll trust him enough to try it...etc.

So even though I don't think he can teach plate discipline...he might STILL be a net gain for us.

I'd like to see Edgar signed as a PLAYER-coach. Put him in the lineup against Keuchel tonight.

Best thing to happen to Seattle sports was Edgar Martinez.

I'm *guessing* that the Cano signing will be a bigger deal than Edgar sitting on the bench, and I'm *hoping* that Cruz will be as well, but I can't think of a move they've made recently that had as much potential impact.

I understand there are no guarantees, and that Edgar might be a bad fit as a full-time coach, but I also understand that he will have every. single. player. on that bench eating out of his hand -- including Cano, if he ends up in Edgar's laser sights.  Nobody on this team has a career even approaching Edgar's, and that kind of credibility is, as Doc says, extremely rare to find in a hitting coach.

Love it.  I would *not* love Dan Wilson coming in for a prominent coaching position.  I would *not* love Buhner becoming the bench coach.  I probably *would* love Jamie Moyer coming in as pitching coach.  I think Edgar is as good as we could hope for in a hitting coach, and his hire has the potential to be a franchise-changing move :) The odds are long on that one, but I can't think of any reason not to be positively glowing about this hire.

When not to coach

Often the key to coaching is knowing when not to coach. Not every 0-10 streak demands a tweak.  Most simply do not.  If your coaching is tweaking you after every game or series then there is no ownership (by the player) of what they are trying to do.

The great golf coaches (and hitting coaches, I deduce) make simple changes (or attempt to) and do so with care.

The best thing from Edgar, in the short turn, is perhaps a bunch of "great AB there."  Confidence is key.  The suggestions on approach, on the bench--mid game, may be the best thing he can bring.

But that is true about HoJo, too...and he was a decent MLB hitter.  Edgars superior hitting pedigree doesn't make him a beter coach.  But any change is welcome at this point.  A head needed to roll.

And Matt, I imagine you're underestimating Babe Ruth's ability to read pitchers and analyse AB's.

Wow. I totally missed this.

I love Edgar. No idea if it will work any better than it did with former MLB hitters like Molitor or Baylor or even HoJo but Edgar's stature in Seattle will mean that he truly cannot be ignored, even a little bit. I mean, there is a street named after him outside the stadium and his name is visible in five foot letters in LF. Dude is royalty in Seattle. I hope he lasts more than end of season, since that's likely how long Lloyd has if the team doesn't turn things around.

I'm really encouraged by some

I'm really encouraged by some of Edgar's quotes in this post: http://mynorthwest.com/374/2776013/Maposs-call-on-Edgar-Martinez-as-hitt...

Odd as it may seem, you may be selling him a bit short.  Even with the final year collapse, unadjusted he was just over the 3/4/5 round figures point at a closer estimate of ~.300/ .410/ .510.  With appropriate adjustments to his BABIP and ISO, all of those could easily may go up -- especially since the early Safeco truly was an extreme pitchers' park with the glare of the backdrop and the crazy shadows on top of the flyball deadzone in LCF.