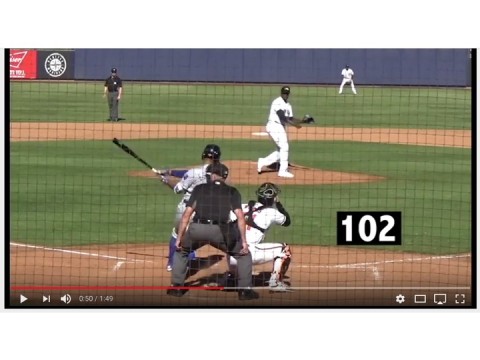 The MLBFarm.com site has Thyago Vieira hitting 102 MPH in the AFL, and averaging a hundred.  Well, 99.4, on a good solid 14-count's worth of fastballs.  Bob links us up to this chart, and doesn't mention that Luiz Gohara (our CC Sabathia hopeful) is also averaging 97+.  I've heard good things about lefties who slam 97 with regularity.

The same site had Vieira averaging 79 MPH (-20 MPH) on his slider.   According to them, he had the 14 fastballs at a hundred, had 6 sliders at -20 MPH, and one other slider at -20 MPH probably misclassified as a changeup.

You remember that commercial where Felix was harassing Cliff Lee, playing a game all day long to list every baseball player with two first names?  How many of you guys know Euro soccer?  Thyago Vieira is such a sick name it should be illegal.  But that aside... what else we got ...

According to this Wiki page, Vieira represented Brazil in the 2013 WBC.  He turned 23 this year, fanned 10+ men in high-A, and the M's picked him up in 2011.  Presumably he grew into his frame, started raining lightning bolts and that's why he's in the AFL.

But there's no text that's going to make the video more fun.  My own favorites are the pitches at 1:20 and 1:34.  Heh!  If only we had an org willing to slam young flamethrowers in there.

Dude appears to have no command at all right now...but the slider is absolutely hilarious paired with the fastball at 100...

I'd like to see Gohara and the rest left in rotations on the farm for now.  It'll be interesting to see if Vieira, who last started a game in the minors  in 2013, tries to make the jump from A+ this spring.  Probably AA at least to start the season first?   I wouldn't be surprised to see him in big league camp for a bit.  I wonder if he's currently working some adjustments or did this season.

Apologies for the long link...

Well that scouting report instantly looks suspect to me.

Not meaning to cast aspersions...but...it says his fastball velocity rates as 55 on the scouting scale.

yeah, had the same thought.  But  it's all about movement and command, not grading speed