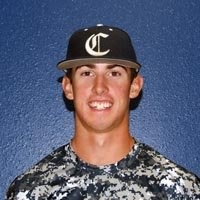 For those of you who just joined us, "RockiesJeff" is a real-life pitching coach who likes to chime in with an "aw shucks, thanks for all the insight!" comment for us 'net rats who specialize in Pokemon.  Back channel, he does keep a few of us up-to-date on his son Jeremy, who is a bona fide Junior College pitching star.  It is like a machete in the jungle, trying to be noticed by MLB franchises these days, but Jeremy has definitely talked to his share of scouts, including from the M's, I think.  He's gotten some workouts with MLB teams, and I believe he's scheduled to attend the predraft meetings in KC.

Jeff wrote us a few days ago,

Gentlemen! I had to let you know that college baseball has ended here for Colby Community College. They won the Jayhawk Conference for the first time in school
history but had a hard day yesterday.

Jeremy pitched the first game. He dominated through 5, gave up a run in the 6th and then an error led to a run in the 7th. There was a lightning delay and Jeremy came out of that looking stiff for about 15 pitches that gave up 2 runs. Colby had a lot of changes and there were multiple questionable calls that hurt.

Long story short, fun season that ended before they were hoping.  I think when the results are released, Jeremy will end up about 6th in the country with Ks. I think he ended up with 104 (missing the school record and career record by 4) and 21 walks with about a 3.50 ERA. I wish he would have kept his knuckle curve this year....but I am only a Dad so I know to keep my mouth shut!

Jeremy gets his two year degree and we will see what awaits...with some golf with his Dad. I promise to keep you both updated. Thank you both for your caring and interest. I really appreciate each of you.

In the Pikes Peak Courier they have a huge full-color spread on Jeremy.  CLICK THIS LINK and go to about page 17.

Would love to hear Spectator (much less RockiesJeff!) chime in on Jeremy's prospectus - a JoCo righty with a 94 fastball and a bevy of strikeouts.  He'll have no problem pitching for a 4-year school if that's the route he chooses, or could roll the dice in the ammy draft and, I'm guessing, be taken in a lower round.

Would love even more if the M's grabbed him :- )  then we could start counting down the days to freebie tix to Jeremy's Opening Day starts ...

...he's certainly better looking than his dad!  :)  (Truth in advertising:  Thank God my daughters take after their mother)

But hey, RockiesJeff even got credit for the pix in the article.

Jeff, you, Doc, Spec and I have teach the kid to put a little curve to the bill of his cap.  I tell the same thing to my students.  This new school stuff is wearing me out!

Better looking? Moe, it doesn't take much to be better looking than me! Add to that smarter, wittier....that would be a very very long list....of which all the kids far exceed! Fun season for Jeremy. He was just named first team All-Conference and All-Region. We are thankful that he is signed to play for a solid program at Bradley University this fall. And it will be interesting to see if anything happens in the crap-shoot of the draft. Either way he has had a fun year and hopefully there is much more ahead. I am careful to say much as don't want to sound like the gloating Dad but I can tell you that any caoch would be hard pressed to find someone that works harder than Jeremy. I will let the rest to Spec and you all.

And the knuckle-curve got too flat and the slider got sharper. Always work to be done!

Moe, if I gave Jeremy a cap with a 'normal' bill, he wouldn't wear it. He is so used to not having anything in his line of sight that he can't stand to wear anything that isn't as flat as Kansas where he plays!

Love it!  Blame it on the Kansas prarie!!!