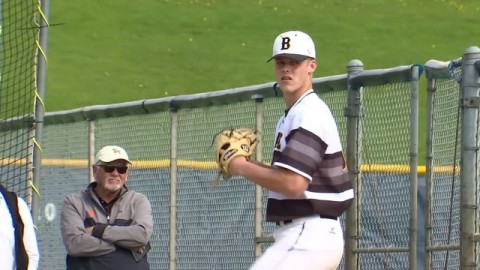 Stub here for a fresh battery of questions at G-Money.  When he put up that great article last week, and the ballclubs started drafting, first thing you noticed was that G's "ones to watch" hitters flew off the board like Peregrine Falcons.  Also, he reacted to Sam Carlson like "He'd a been fine at #17 overall" and the Mariners promptly said exactly the same thing after they drafted him.  Guess my question there would be what caused the tumble to #55; the trend against High School pitching is strong, but that strong?  Teams just felt skittish about the 6-months-a-year Minnesota snow, I guess.

I am heavily biased against this template, the glove-first 1B.  G sez "think Eric Hosmer" and the Mariners reinforced that too.  But here's the thing:  the average WAR return over a #17 pick's CAREER is about 5.0 or so.

The biggest question on a mid-round first pick is really --- > does the guy wind up starting for you in the bigs.  Other questions are secondary.  It's not like the NFL, where the pressure on you is to get an All-Pro at that spot in the draft.  The M's need decent return, and they advertise that Evan White will deliver it.  Sporting News concurred that Mr White is "great value" at #17.  That always boggles me, the idea of "great value" at such a high pick.  LOL.

Looking at this draft generally, you think about Heredia, Gamel, and Haniger as performance heroes as opposed to Jesus Montero & Co. as pedigree heroes.

Scott Hunter sez "Evan White had me at hello" which reminds you of Kyle Seager types.  Here is a Seattle Times article with video.

One of the main reasons that Sporting News gave the M's an A in their evaluation.  The M's happened to be in Minnesota when they drafted Carlson so could bring him into the clubhouse.  Did I read right, that the first 10 picks are pretty well locked up?

Lookout Landing has an article with an excellent vid of Carlson's motion.  For a teenager?! the American-style checkpoints just go bing-bing-bing.  From an aiki dynamic-CG standpoint?  It is butter-smooth acceleration of the CG, great connection of the CG to the energy in the baseball, graceful deceleration that doesn't look like much wear and tear.  The guy was in high school?  Must be very gifted in the mind-body department.

LL's comprehensive piece also discusses Carlson's arsenal at length, with great videos of each pitch.  Fastball:  already ML plus.  Curve: you can see the Erikkk Hanson two plane break from the monitor.  Change: -10 MPH but arm action is hard to tell.

It's an amusing question:  how do high school hitters survive such a pitcher?  Carlson got blasted in the state final (?).  Doesn't matter; I'm just wondering how an 18-year-old gets a hit against a prototype James Shields.  Just noodling, y' unnderstan'.  ... well, it was a state championship lineup, and some 18-year-olds are purty good hitters.

Jason Churchill had Carlson going #18, immediately after the Mariners' pick.  Here is his writeup on Carlson, actually on the first round.  His description has Carlson as able to compete in the big leagues right now, from an arsenal standpoint, though Jason wouldn't put it that way.

That isn't how I look at it.  But the M's head of drafting, Scott Hunter, sez

Mariners director of scouting Scott Hunter said this after Day 1: “I don’t think as an organization we could have done better than we did today.” He’s not wrong. The Mariners’ aren’t here just because of their first-round pick, Kentucky first baseman Evan White, though he was great value at No. 17. No, Seattle’s here largely because of its second-round pick, Sam Carlson. See, Carlson was expected to be a first-round pick — both Baseball America and MLB.com rated the prep right-hander from Minnesota as the No. 15 overall prospect in the draft — but there he was when the Mariners picked at No. 55. Sure, maybe he dropped for a reason and maybe Carlson won’t have a great career. But the Mariners have to feel pretty fortunate that a prospect who works in the mid-90s and was considered a top 15 prospect was around at No. 55. So they get an A in this evaluation exercise.

My first Q would be, where do the M's draftees fit in their current top 15-20, if at all.  Would you rather have Sam Carlson or Nick Neidert if you had 5 minutes to choose?  Evan White or Dan Vogelbach?

has been bad so far. But so was Gamel last year. So was Haniger, for the Dbacks. Heredia didn't impress too many in his cup o joe.

Vogelbach could turn it on like the rest of Dipoto's position players have at any time. Won't surprise me to see Vogelbach spraying doubles to the gaps like Edgar for the next ten yeaJoe.

Good things in store for the Mariners.

If we could just break the curse of our 1st round draft picks getting knocked out for extended periods, that'd be greaaaat.

I don't know who I'd take in that comparison.

I'm just glad we took who we did. G's commentary made it immediately obvious how huge of a steal that was. Kudo's, G-money...

Drafts are normally amusing but not very relevant

The Ms had a very good draft for several reasons:

1) Their first two picks have "major-league player" written all over them.  White is more of a high-floor type who might turn into Belt or Yelich if it works out right, but who can be a decent player just based on his glove and athleticism even if his bat never produces at an above-average level for a first baseman.  Carlson is your high-ceiling starter and might be rated higher than White in some prospect publications next year, but really is that "several years away."

I personally would take Carlson over Neidert on ceiling and I'm higher on Neidert's ceiling than many. Similarly I like White's floor more than Vogelbach's, because of White's athleticism and defense.  If Vogue doesn't hit he's basically worthless.  If White struggles at the plate he'll still get 8 or 10 years in the bigs like Doug Mientkiewicz or (blah) Casey Kotchman. If you can add 2 players to your top-5 in the draft it's been a good one, even if your farm is thin.

2) Also, the farm is now less-thin.  At least as far as pitching is concerned, Seattle addressed the massive weakness in last year's draft by throwing a ton of arms at the problem.  Prep player, juco arms, juniors or seniors, Seattle drafted them all.  And so many of them are interesting.  Interesting arm motions or deception, raw unharnessed stuff or an arsenal masked against lesser competition, the Mariners have a lot more options to get lucky in the pitching department than they had last week. Some of the position-player conversions even have a chance. That's a tremendous help to a system that could use some lucky breaks.

3) The Ms went heavy on glove players with the bats they did draft. Under Zduriencik, the Mariners LOVED to take players who might have been considered bat-first and try to keep them at their hardest-possible fielding position. That hurt the pitching staff as well as the growth of the player involved.  Dipoto loves his athletes to a fault so in this draft we added a bunch of glove-position guys with the idea that even on the downside they might be able to be bench players and defensive replacements. It's better to get something out of a draft than nothing, and one or two of em might hit a little.  The two first basemen selected, 1st rounder White and Ryan Garcia, were two of the better-fielding first basemen in all of college. Other than them it was almost all shortstops, catchers and center fielders.

Some of those glove guys might hit, too.  Whether it's the raw prep center fielder Myles Christian, or last year's CWS champion Billy Cooke, there are bats after White that could come through.  I still have a really serious eye on the CF Cooke.  The Mariners have gotten big years out of Braden Bishop and Ian Miller, two glove-first center fielders who never hit (or had a swing) like Cooke, and out of system newcomer Chuck Taylor.  Cooke has a pro swing, a good eye and tremendous outfield gifts.  He could be really interesting in a couple of years if he grows anything like those guys.

It feels like a good restock.  It gives Dipoto more ammo to work with next year in his whirlwind of trading and provides both depth and upside to a system that had a lack of both.  It's hard to get a farm back on its feet in one year, especially without a bunch of early picks, but this certainly helps. It single-handedly rejuvenated my interest in the farm, so that has to be worth something right?

M's have signed 11 of their top 12 picks (Carlson is the exception because he's still pitching for his school). The team was able to save ~$750,000 on their signings, which I think means they can give Carlson ~$2.2 million before incurring draft penalties.

Thanks for the update