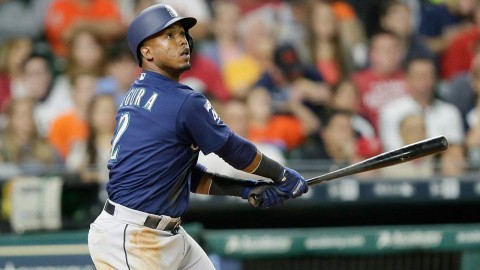 Picking from a long list of the usual suspects, here are several that Dr. DL found especially amusing this weekend:

Batting average with Runners In Scoring Position (RISP) is a junk stat, since usually an AVG looking back here won't predict an AVG going forward.  However, in this case you wonder.

Segura is hitting .385 with a whopping .577 SLG in the RISP condition, and also hitting .352 with a .534 SLG in the simple "men on base" condition.  Imagine for a moment YOU are the pitcher.  You are in the midst of the inning in which Heredia-Gamel and/or Dee Gordon have worked their way onto 2B and 3B.  Got that firmly in your mind?

You are aware that Segura is comfortable attacking the ball on you, but ... would you rather pitch to him, or to Cano (Haniger) and Boomstick?  So what we are seeing is pitchers giving Segura a good piece of the plate, and he's accepting the invitation.  Let's not forget that Segura is a 200-hit man himself, but whatever he hits he is still camoflaged, assuming runners are on, by the fearsome lumber behind him.

On TV tonight, they quoted him as saying he has "felt right" pretty much all year.  Previously he's explained that means that the "timing of his load" to the pitcher's release point is correct.

WATCHING him hit, watching him lean down and swat pitchers' pitches through the holes right and left, watching him exploit mistakes, Dr. DL is starting to buy into his .290/.375/.560 batting line.  On TV they also underlined the idea that organizations around baseball are buying in, telling each other "Hey, don't let this kid beat you."

With each passing week and every new handful of RBI -- he's got 34 or 36 or something, to put him about #6 in the league -- he looms more ominously as the M's franchise player of the next ten years.

Continues his Control the Zone (TM) rampage.  Continues his DiMaggio-like domination of center field.  Continues to provide the Seattle Mariners a better defensive unit than what they had before Cano's suspension.

Definitely he started real slow.  But he's been swinging the bat lately, .381/.458/.667 over the last week going into Saturday's game ... and then Saturday, smacked a homer right down the RF line and smacked a sizzling double right down the LF line.

Dr. DL keeps reminding himself that the Mariners love Gamel to death, and that's not nothing.

Leaning heavily on the offense, of course.