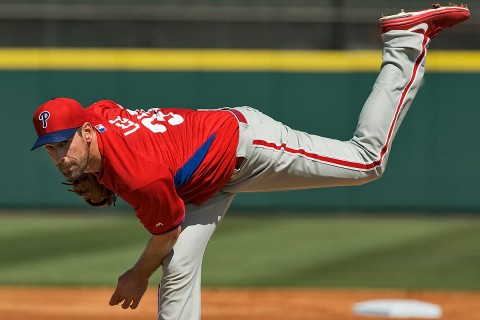 Had his B- game going.  (1) When you come into the game walking 1+ men per 9 innings, and then walk 4 in 6+, that tells you that you weren't having your best day.  (2) Turning from the Esteemed Skeptics to the rest of the crowd:  if you didn't see the game, trust me.  Marc-O missed with several curve balls by 2-3 feet, failed to "teacup" many of his fastballs, and threw maybe 2-3 changeups to the low-away corner all day.

Let's not make 4 walks and 4 strikeouts the end of the world, though.  For one thing, it was really 5 K and 3 BB; he fanned one Ranger on a 2-2 count and the ump made a really outrageous non-call, one of the five worst you'll see all year.  Blowers described the center fielder Heredia as running off the field; he could see it from a football field away, but the ump couldn't see it from 3' away.  Marco then missed with the bogus 3-2 count and that was the 4th walk.

For two things, he threw 61 strikes in 102 pitches, including 9 whuffs.

For three things, it ain't like Jamie Moyer never had a 4/4 day.

For four things, if Marc-O were to continue this ridiculous 8.3 / 1.8 / 0.8 shtick, he would finish with one of the 5 best xFIP's in the American League.  That wasn't going to happen!

SO LIGHTEN UP YA MOOK.  We mean it in a good way.

Marc-O gave up 4 hits all day.  Actually he only gave up one hit.  Of the four official hits, one was the catch Haniger made, an out if the M's challenged (which they didn't because the runner was thrown out going for 2nd).  Another was an Odor BUNT hit.  And a third was an infield hit by Odor.

No extra-base hits all day and nothing close to one, except a single liner down the LF line which was 6 feet foul.

It was March 17, precisely, that the Big Declaration was made on him.  And it was after starts 2 and 3 (both early KO's) that we had the big flame war on SSI, during which Dr. D published a bunch of F/X strike zone graphics trying to prove that he pitched in horrible luck both times.

All that said, if you're holding judgment on Marc-O until the end of the season, you're probably wiser than Dr. D :- )

But that shtick you're hearing today about "Marc-O's newfound ability to go deep into games," that was always feebleminded and as Erudite Denizens, we trust you know exactly why.  We'll say only that (1) Monday was his 17th start as a Mariner, and that (2) baseball people have been grouchy about starters "showing they can handle the workload" for 100 years.  (3) Many other things could be listed.

One hundred years they've been sneering at the "Five and Dive."  Nolan Ryan made it the corporate philosophy when he was running the Rangers:  Can you go deep into games?  That's what makes you a Real Pitcher, like Nolan was.

But, of course, no starter has a mystical inability to go six innings, unless he's mystically lousy.  Maybe Ariel Miranda can't get through the 3rd AB; if so, that's cause he's lousy.

A few of you probably noticed that Marc-O was throwing a routine 92 in the early going.  Check out this bittersweet velo chart rat cheer.

But maybe he WILL build velocity, sit 92, touch 94, and those amigos who were thinking Cliff Lee, well ....

Marc-O threw 34 fastballs, 27 curves, 26 changes, and 15 true cutters (which bent 10 inches gloveside vs his fastball).  Check out the bite on that curve.

Twin closers, and .... Marc-O jusssst missed handing them the ball.  Servais took his pick of 95-MPH candidates to finish off the last scraps of the 7th; he selected James Pazos to blow away a single lefty coming to bat, "bridging" from Dr. D's pet starter to --- > the twin closers.

2002 was the last time Dr. D witnessed a game take this particular form.

Since Dee Gordon hit the DL, the M's have played 8 pitchers' duels in a row and won 7 of them.  Sherminator, at D-O-V, opines that our rotation is as fragile as lace china and we shouldn't get too used to winning 87.5% of low-scoring games.

He's right, obviously.  Minor-ly, nobody should get used to winning 87% of anything; Dr. D doesn't expect to get along with his cat 87% of the time.  Major-ly, this rotation IS fragile and I'll go Sherm one better.  The odds are, You just saw the best 8-game rotation stretch you will see this season.  That was it.  Hope you enjoyed it.

Needless to say, the rotation doesn't HAVE to be as good as it's been the last two carousel spins.  Nobody's does!  We're just hoping that Marc-O and LeBlanc save our bacon, by posting 100+ ERA's.  We were going to go as far as the offense took us, remember?

Colome's out for Tuesday, I assume.  Mercy sakes alive, there's such a thing as getting tired of winning ...

For shtick on the pennant race proper, see my satellite site, Detect-O-Vision.

"All that said, if you're holding judgment on Marc-O until the end of the season...."

Jeff you crack me up.  The reason I've been hanging with ya online for these 21+ years now?  The very best part of your shtick is the part about calling things out while they are happening.  It's not about waiting until the votes are cast after the career is over.  I remember having many arguments with folks back in the mid 90s who told me to wait 10 years and get back to them about the Big Unit.  I declared the Unit a HOF pitcher at the beginning of 1995.  Took a lot of flak for it.  "you gotta wait until he proves it over time".  I said "says who?"

My father told me after watching A-Rod's first week in Tacoma that he was the best player he had ever seen.  And that's coming from a Willie Mays fan.

Does that mean I think Marco is that?  Of course not.  But the same mentality applies.  Let's recognize what we are seeing at the time we are seeing it.  It's a heckuva lot more fun that way.

Most people would rather

Most people would rather safely be proven right than risking being proven wrong. I can understand that, because I'm closer to the former than the latter. I prefer to avoid rashness. The few times I would get joy from being proved right doesn't necessarily make up for the disappointment in frequent times I am proved wrong. Here's looking at you, Fab Four of the M's from some years ago (Smoak, Ackley, Montero, and somebody else I'm forgetting). That was the young core. We were all convinced. History puked on our exhuberance.

But I also totally get the opposite mentality. Might as well have a good time while you're following baseball. These are just two different mindsets. One ain't right and the other wrong, there's room for people to be different.

That blown 2-2 call was frighteningly similar to the one from April where the pitch after the blown call was blasted into the bricks. I expected Marco to come apart. I know I would have - that was a textbook strike, not even close to the bottom on the zone. Instead, he walks the guy then calmly picks the runner off 2nd to end the inning. Great composure.

Over at DOV, there was a blistering exchange that essentially boiled down to "if we play .500 ball against bad teams the next two weeks, we're lucky."

Might I suggest you check yourselves into Shiclshadel rehab to recover from negative Mariner stress addiction?

Haniger seems to have packed

Haniger seems to have packed away his plate discipline and sent it to Lower Slobbovia. But of course, he'll get it back. I personally think the strain on the position players still in the lineup is proving detrimental to some. That'll change over time and when some of these guys come back.

Nearly three decades ago, in his Baseball Abstract, Bill James essentially argued that winning one run games was (over the course of a season) a factor of luck.  I don't know if he's changed that idea in terms of the new "Bullpen Paradigm," but I haven't seen it retracted.

I looked back on the last five World Series winners and they were something like 92-85, combined, in one-run games.

The M's are 16-8.  Now it might be that we continue that hot-fortunate pace, but it might not.  I mention this not to try to jinx the M's, but to offer a reminder that if we lose three or four consectutive one-run games it doesn't change the nature of the team, but represents a simple norming of outcome.

I know it is only 123 PA, a small sample, but it is worth watching if RHPs challenge Nelson more and he hurts them less.  He's certainly been hobbled, that is true, but age eventually catches up to all of us.  Is this his season?

I haven't noticed him being challenged and beaten as much as lots of whiffs on breaking balls. 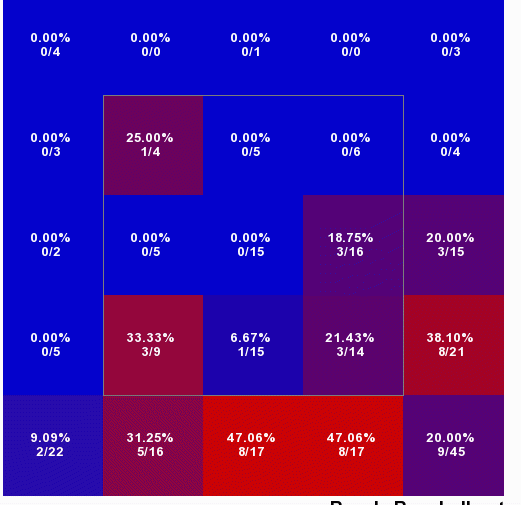 And a PSA: right now, the only way to get to other articles is through the comments threads.

Really cool posts up n' down the lineup.

In the moment is the most important moment

Told my friends all the time during Juniors era, if you don't go to the park and watch this kid, you're missing the best player of our lifetime to wear M's NW teal.  And when he's gone, it's over.  I have that "best player we'll ever see" feeling with Trout; and i'm happy to have watched him in-person.  Mostly, we don't know what the future holds with these guys, but with a few one can sense greatness.  Haniger comes to mind currently with Zeus edging forward too.  But they still have years of great performances to get there.