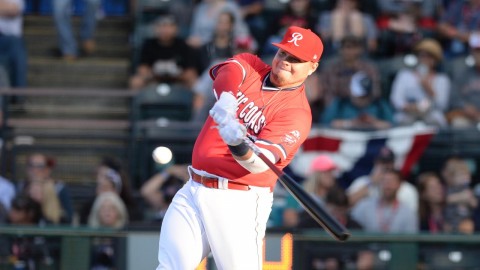 The M's site proclaims the victory we all craved, "Prospect Daniel Vogelbach on Mariners Roster."  How does the Mainframe process this?  In other words, what is jemanji's own pickles-and-aiki baseball take on this situation?

There are several ways this will develop:

1) He won't play for ten days, get 3 PA's or something, and will get sent back down.  This depends on Scott Servais' prejudices about 'Bach's visually unkempt baserunning and defense.  Call this 40%.

2) After three weeks, given a fair shot, he'll obviously be outplaying Healy and his PT will slowly drift towards 60% by August.  Call this 30%.

Don't forget that Divish over the winter, following the crowd around Dipoto's office and also following several Scott Servais quotes, flatly categorized 'Bach to have "failed to have taken hold of his chance" based on ---- > precisely 31 PA's.

But there's that sweet, wonderful 30% shot that 'Bach will be given his fair shot, will happen to be hot when it arrives, and from there --- > You make your own prediction, as to whether Dan Vogelbach is Kevin Youkilis, David Ortiz, or something else.  Quick reminder:  'Bach hit .400 with 7 doubles and 6 HR in 50!! at-bats.  Spring Training stats mean nothing ... if you're Robinson Cano or Taylor Motter putting up stats that are roughly inside your norm.  Once in a while a player Emerges, and I've noticed over the last 40 years that sometimes this occurs starting in that season's Spring Training.

:: dryly ::  It's odd that 1B continues to be the position at which the Mariners find themselves platooning.  :: shrug ::

RockiesJeff had warned us to remember that the M's think in labels.  (Of course, HE put it much more nicely than that.)  And here we go, Moore - Miranda - Povse - Whalen all lined up neatly like spoons on the Tacoma dinner table, ready to "stay stretched out" when (when) the first SP injury occurs.

We need hardly remind the Denizens that there is much value to be had in the Earl Weaver long role, wherein a young player learns the league, talks to the Big Guys about the batters, and so forth.  But Wade LeBlanc tells you just how far Jerry Dipoto leans into the conventional wind.

The M's fan can derive some consolation that a month out, when the first SP goes down, then Jerry Dipoto will be able to SELECT from a bevy of young SP's in Tacoma, will be able to take the one who is running the 15:2 CTL ratio.

Funny thing, the first TV game I saw (in FEBRUARY!) Lawrence came in and I kinda laughed, wow, that guy's ahead of everybody in camp.  He had tremendous frontal extension and CG smoothness, hit the mitt with the fastball, hit a basketball-sized area with his slider.  Wound up with a 17:2 CTL in 15 innings and looked great every single outing.

'course, a 91 fastball and a located slider, you'd have to be AWFULLY consistent to make that work as a plus reliever.  But, a few guys do.

Even funnier thing:  the M's website doesn't have him on the roster.  It has Erasmo Ramirez.

The M's are giddy about how well he is bouncing back, which ... I'm guessing IcebreakerX will tell you not to be surprised if he has a few months here and there left in him, after long layoffs.  Anyway, the M's tell you, it's just May or June and then "you can't find a pitcher on the market like that.  You just can't.

True dat.  And Dr. D. could not believe his EYES over the $100,000 roster retention they swiped from him.  Did I read that wrong?

Wouldn't it be HILARIOUS if the M's did stumble into a David Ortiz.  Just as Zuumball began smoking a .550 SLG.  And Mitch Haniger wound up in a top-10 MVP count.  And all these guys were the 6-7-8 hitters.

< Previous post
...And another dumb comparison at SP3
Next Post >
The King Will Come
Blog:
Hottest Groks
Tags:
Dan Vogelbach

Vogelbach is one of those rare draws at the deck

that you just can't ignore.  Possible all of this is third order thinking by Servais, aimed at lighting a fire under Vogs to maximize his output, but I'm exTREMEly skeptical of that for what should be obvious reason (not least among those reasons the last decade and a half of general futility by the M's org when it comes to developing high-caliber players).

The Entitled Vet mentality is indeed one of the worst facets of organized baseball.  That particular problem doesn't really exist in the NFL, does it?  A guy stops being productive, he's gone.  Period.  And if a guy's productive, it almost doesn't matter what kind of problems he brings to the clubhouse--he plays if he can swing a game in his team's favor.

I understand there can be (almost certainly ARE) structural differences between the relative sprint of an NFL season and the marathon that is an MLB year, which might necessitate a little more laissez faire approach to dealing with personalities in the clubhouse, but at some point it's got to be about WINNING rather than running smoothly.  The M's, as the worst playoff-drought team in the league, are well past that point.

As an alternative to the MLB(TM) Entitled Vet scenario, there's the one in which you (justly) believe yourself to have pulled a fast one on the league, with the Healy trade .... and are so eager to demonstrate your cleverness (we got him to play every day!) that you let it get in the best interests of the club (by refusing Vogelbach his PT when he earns it)?

I think it's the money

NFL doesn't have vet entitlement because they do not have guaranteed contracts like MLB.

NFL players live by the same kind of rules the rest of us do. When you get fired for not doing the job you were hired for you no longer get paid. Can you imagine how much different the world of MLB would be if the same were true for them?

the urgency to win

in the NFL is palpably higher.  It's a great point.  Bobby Wagner will be gone the 3rd game he's not great any more.

Saw a Angel on the cover and thought...

...you might be about to finally draw attention to the fact that Shohei Ohtani is getting absolutely mulched in the cactus league on both sides of the ball.

Wouldn't it be hilarious if he ended up spending most of the year in the minors? :)

And a giant exhale of relief

Of course, the Angels can eventually just talk Ohtani into accepting an SP role only.  But that might be a good while out...

Without looking this up, I'm never excited about the bats in April.  I hope April is NOT 'Bach's only audition.  The M's are notoriously slow starters.  This guy needs to be int he lineup, but he's not likely to be the guy we think he is until summer.

Before April's over, they've got 7 with the Indians, 4 with the Astros, and the rest not so easy (such as a series with the Twins).

If Vogelbach hits .188 in his first 15 ABs -- as Kyle Seager might, am I correct? -- gets sent down for months, and Divish leads the charge "Bach blew his chance again!" then SSI is going nuke.

Thus the labels...see, told you so! Actually hope not and would love to see Vogs continue as is!!!

I hadn't seen Vogs have the correct hitting approach even in the spring until this season, but now that he has the correct approach, I'm going to be very upset if they never give him a chance.

Either way the daily lineups play out, when is the last time we had a hitter on the bench the caliber of Vogs or Healy?

My nickname for Vogelbach

Will be Hoss Cartwright.

LOL and here about 50% of the users

But...that's more of a contemporary reference. :)

Let’s not and say we did?

Kids these days WAY too drenched in innuendo.  I’m lucky to get away with Erasmo (and maybe I only think I am at that....)

I wasn't thinking of innuendo at all.

The moniker comes from a sitcom about a zany, but loving family from the 1980s...the era when rap artists were novelty icons, more fun-loving than acidic. The oldest boy calls himself that name, falsely imagining he has talent as a wannabe rapper...a bit like a dozen other 1980s rap artists.

The show is about 180 degrees the OPPOSITE of the sort of innuendo to which you are referring (it's actually almost anachronistic...reverting to a style of sitcom more popular in the eighties and nineties with a very family-positive and moral vibe and featuring comedy that is as clean as anything else on television in the last 20 years (and yet, I find it fairly consistently effective, fwiw).

How others might hear that moniker has no connection to how I hear it.

But that doesn’t help me as site  steward

Dude rakes in spring training, then opening week hits a bomb and looked good, but is promplty shipped off.

I just went back and looked at the '06 stats, and turns out he DOESN'T have good stats, huh. I guess 32 PA's in 31 games is all you need to evaluate a guy.  Also, I remember thinking he was one of our 'better' hitters....maybe not. Either way, Big Tasty (great nickname and show, props Matt) shouldn't be denied a chance THIS time. The replay of the HR he hit in yesterday's game (last ST game) sounded like a big boy HR for sure. Didn't look overly deep, but CRRRACK! I'll take 30 more please! ;-)   If Servais CAN'T find a place for a .370 OBP hitter, I don't know what to say....its not like we've ever had too many of those....

Hideki Matsui MAY have been AS good as Petagine.

Bavasi liked the age-35 Petagine, rostered him over Hargrove's objections, and when Petagine homered his first time out, Hargrove deep-sixed him to make sure he didn't slug .500 and prove Bavasi right.

Here are the game logs from that year.  After the game-1 homer in a 4-5 loss to the Angelcs, Hargrove carefully iced Petagine until he felt safe giving him two (2) starts in May (!) and by July, Bill Bavasi gave up the staredown and mercifully cut Petagine.

A despicable episode, similar to the Shin-Soo Choo freezeout, that was typical of the dysfunction during the Mike Hargrove years.  After a similar staredown, Bavasi simply GAVE Choo to the Indians with the acid comment "every player deserves a chance at a career."  Of course the problem was that Bavasi didn't pick his manager, so they couldn't consult; LincStrong had hired their own ego-ed out (but handsome) manager who managed the press well after Lou's unkempt approach.

Ha, yeah that. Thank you for the Hargrove reboot. I had that locked away and now I remember why.  :-)

About as pithy a way of making the argument as can be found.