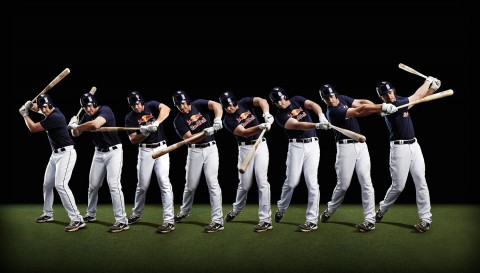 It doesn't seem that the human body was designed to make such a wonderfully aiki motion, does it?  Your spinal cord and hips are quite a thing.

Aikido is all about centrifugal motion, as are other combat sports.  An early heavyweight champ was asked why he was good; he replied "I put my hips into them punches."  One aikido sensei pointed out that spiral power zooms out to the galaxy and in to microbiology.  Still, aiki motions are mostly about grace and mobility, while the above baseball swing is more towards maximum energy.

... is under maintenance.  We're workin' it.  In the meantime please don't hesitate to take the long way through the comments threads.  Beats workin' :- )

DaddyO sez, among many other interesting things one cubicle over,

By the way DaddyO, best best wishes on peace and comfort in your health situation.  You know my work website, email address, and all should you get interested in chat offline.  Sure appreciate you -- and your visuals on watching the grandkids!

On the "musing," I'll see you and raise amigo.  I wouldn't consider it "musing" but more towards "analyzing correctly" or even "stating the obvious."  25-30 years back, Bill James was musing from afar, It's no wonder the Seattle Mariners can't win --- > in view of the fact that the city only has them through a lawsuit.

The Mariners' level underperformance with Unit + Junior + ARod + Edgar + etc was very obviously historic ("the 50's Braves parlayed Aaron, Spahn, Mathews, etc into one pennant and a long series of excuses; the Seattle Mariners appear to have outdone them".)  You can generalize that to the 40 years as a whole, of which this year is another example.

In my view it is normal for a pro sports franchise to "underperform" in the city of Seattle, which on a certain level is ashamed of macho vicarious combat.  One vivid example, the UW football Don James era when the Huskies threatened to truly become a top-5 NCAA franchise.  The UW President himself, Gerberding, made public statements about how "overblown" college men's sports were, in a sort of preamble to the area's identity politics twenty years late.

In Boston and New York they aren't subliminally ashamed of dominating other cities in their athletic wars.

*It is not a one-variable world, and Paul Allen/Pete Carroll have done what they have despite of the city's personality.  It is a huge advantage to have your city's soul in the fight with you.  Carroll didn't put the Seahawks in the Super Bowl in year one, though, and I think it's okay to give Dipoto some more time to see if he's a Pete Carroll type.  :- )

20 some games from now, you won't have any choice about sinking into a warm baseball soak for the evening.  Carpe Diem  ... and look alive and get aggressive on that remote.  There are at least 10 good games out there ...

A local beat writer flatly said on Twitter, underlining it three times out of obvious pride, "I don't root for the Mariners.  I just cover the team."  Yep!  If I toured the Rembrandt wing of a museum, that's exactly what I'd want for a tour guide.  A person who had absolutely zero passion for Rembrandt and told you so every fourth painting.

Baseball simply is not hard news.  We go to a baseball game for its entertainment.  Nobody asked me, but if anybody did, I am completely opposed to this attitude coming from entertainment reporters.  Don't review a movie for me if you don't like movies.  Bah humbug.  ;- )

Report is that Felix threw the sim game and he's ready to go in 5 days.  With Zeus the news was even better, as My Northwest reports with verve. Cool with or without a pennant race.  And it's not yet "without."  Could be in three days, but isn't so today.

If you missed it, she received a diagnosis of breast cancer a few days ago.  ... Some people you are supposed to root for; it is "correct" to root for them.  For me, Angie is a "natural" hero ron so many different levels.  Here are a few things I appreciate about her as a TV personality:

√ Comfortable in her subject on a cell-deep level.  Ex-pro ballplayer if you didn't know

√ Doesn't try too hard to convince you she belongs there:  in fact, does not try AT ALL

√ Puts her finger on the crux of the matter, very often

√ Wears her femininity, while covering a group of men, with style and grace

In my view she'd be a very good choice for leading a national MLB Network or ESPN show.  She doesn't have quite the "babe" factor that you usually see -- and you'd think that was a plus from ESPN's view, though it isn't.  She is certainly nice-looking and yet her talent makes it obvious that she wasn't hired because of her looks.  We mean that in the best way possible.  In fact I go back over all of the above gushing and it seems to get nowhere near what she actually deserves.  Maybe you can help.

It gets kind of old and the temptation is to just get tired of the question.  "Do you hear me now?  Do you hear me NOW?" every couple of steps.  But supposing somebody asked, would you NOW conclude the 2018-20 Mariners have a catcher?  :- )

Thanks for the good wishes,

Thanks for the good wishes, Doc, and the outstretched hand.

Re: Angels' series. It's put up or shut up time for the M's. No more room for them to keep falling below .500. They needed to win one of three against Houston and failed, now they need to win two of three against the Hoppin' Simians to retain any real hope. The inevitable moment is fast approaching when all the sand in the hourglass has been expended, and hopes of tomorrows disappear.