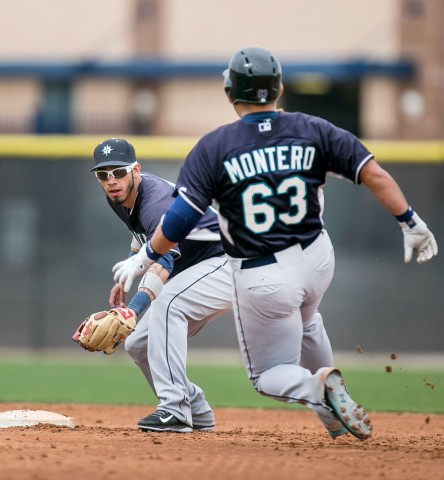 GRIK (a tic of the hardball clok):  Miranda coughs up another 2 homers and 6 runs.  Ryan Rowland-Smith says the tree is green at its core, not rotten, and that Miranda has to learn to accept a BB now and then.

GROK:  You realize that Dr. D is not the only one who believes that Miranda has it in him.  Dipoto, Servais and Hyphen are less-notable examples of baseball minds who also think so.  Aqua-man's super power is breathing underwater, if not withstanding a jillion PSI; your doggy's super power is her nose.  Food, not food, your doggy will figure it out.  Ariel Miranda has not figured out when it's okay to expand the zone.

Hey, surviving the major leagues with a 1.98 homer rate is a little like an NFL quarterback going 13-3 despite four picks a game.  He's probably Brett Favre or something.  ... well, Miranda isn't Favre, but the blogger survived this section, so pffft.

(This 5 ip 6 r 2 bb 6 k line, Miranda deserved a little better; one of the homers fluttered into the short RF corner about 350 feet.)

GRIK:  Mike Blowers had a great line on Boomstick.  "The park seems to shrink after his first swing of the night."  Brought the house down.

GROK:  Another three times on base left him in possession of a .282 AVG with a .367 OBP and his slugging average will probably be okay, since pesky rodent Orc pitchers are not exactly knocking the bat out of his hands.  :- )

We must acknowledge he's not getting quite as many back leg specials (1.00 fly ball ratio during 2008-14), 1.25 two years ago, 1.35 last year, back to 1.00 this year) which might or might not be the quietness of the engines at 35,000 and the beginning of a long glide path down.  But Cruz is a complete HITter as well as a man left in possession of a 93.7 MPH launch velocity at the moment.  He's played 108 of our 114 games, dragging the trudgy hand-tied Mariners after him with sharp tugs of the rope.

GRIK:  Ben Gamel comes up with ^Cruz and Seager on, the Mariners down by about 4, and cleans 'em off with a yuuuuuge double into his power alley.

GROK:  Dr. D was especially thrilled that it was a down-in fastball.  Gamel has been best with high pitches, unusual for a lefty, but it's part of what has given him the really nice launch angles.

On Gamel's double he pulled his elbows in, giving him the Edgar-style alligator arm, and yet delivered a sledgehammer blow to the horsehide.  Like Puumba said, those Orcs are slimy. but. satisfying.

GRIK:  Yonder Alonso hits three balls hard -- a medium-hard liner at the 2B, a medium-hard shot into the corner that the RF ran down (about a .600 fly ball), and a deeeeeep fly ball the other way.  So deep that Jean-Jean went 1B to 2B on it, starfishing around 2B on the headfirst slide.

Then Alonso richochets a check swing off the dirt and gets an infield hit.  Photos of him laughing about it on 1B.

GROK:  In his first game, Yonder did look like that "just need a couple to fall in" fellow he claimed he was.  With him and Valencia manning 1B here, we may get a second try at that Eduardo Perez - Ben Broussard deadline deal that cost us Choo and Cabrera.  'member that one a 'tall anybody?  :: ulp ::

GRIK:  Casey Lawrence threw some divebomb changeups.  Anybody like his chances to contribute?

GRIK:  Scrabble fits right between Nick Vincent (7th) and Edwin Diaz (9th), the three of them cutting hapless Orcs in half as Emperor D had forseen (in the wake of Phelps' injury).  He's only got 23 innings on his arm.  Taking on plenty of LH-on-LH's, anybody think he's ready to go about 30-40 innings the last third?

GRIK:  Leonys got a serious meatball, no disrespect to him, but yes.  It was 89 out and over.  (As you know, these pitches appear in MLB games with more than biweekly regularity.)  He showed that freakish athleticism, this time in the batter's box.  Nailing it far and deep into the gloaming.

He had another single and is now 10-for-30 since his recall, with an 0:7 EYE but with 17 bases slugging in those 30 AB's and he'll be playing against righties only, as Dr. D had always longed for.  Last year he had a very reasonable 36:98 EYE against righties and a 8:51 travesty against lefties.  Any of you earlier Leonydas fans see a chance at redemption the last month and a half?

Not sure what went wrong in Toronto, but the version the Mariners have gotten has looked more than solid for a long man. We're going to need two long men in a seven man pen to withstand the nightmare rotation we now carry, but count Lawrence as the first one. He has three out pitches - the dive-bomb change-up, the stinging fastball in on the hands, and the two-seam running fastball. That's a playable game...maybe the problem in Toronto was bad command that will resurface eventually as Pazos' command problems have resurfaced.  He's hot now, so ride the hot hand.

Hit the sack by the 8th inning, so I missed Martin's dinger.  Watched the video this morning.  First thought was that it was a middle-in dead hanging curvey thing with not much curve Or pace.  He creamed it, for sure, but MLB hitters don't miss a bunch of those.

Will gladly take it!!  Such come-from-way-behinds sort of turbo-charge the team-wide attitude.  A BIG win, emotionally!!

Nice to see Gamel pulling through .

His BA has been coming back down to earth, but he isn't fading at all, is he? Just normalizing. What a great weapon for the stretch run...

IIRC, last time Martin hit a game-winner he became enamored with the home run swing and ended up down in AAA. Let's see if he's learned anything. Sometimes the adrenaline rush of big HR like that can make you feel like Superman, when all you are is Leonys Martin.

The second most thrilling moment of the season IMHO...behind only Nelson Cruz' two-run homer to tie game 161.

But it isn't enough, not even close!

So Mike Trout has never had a year as BAD as the terrific year Harper is having!

be glad you are watching Mike Trout play.  You will tell your kids about him!

Primarily, I will tell them...

we aren't the only ones with starting pitching problems.

Consider the "best team in the AL"--the Astros:

Only Morton is throwing well.

...depending on how long he's out, facing Houston post-WC game could look different than it would have a month ago.

Yeah, minus Correa and with their aces hurt...

...the Astros are extremely vulnerable. I have a friend who's an Astros fan and he's chipping his teeth watching his team play bad baseball right now and wanting Luhnow to get Verlander to stop the bleeding. He was annoyed that we got Alonso for nothing. :)