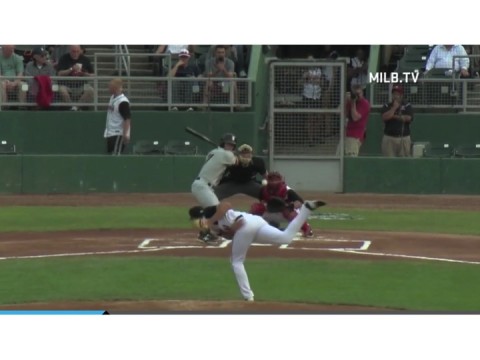 Mariners are playing the Replace Iwakuma Game for next season, and that's fine.  They'll have to replace Gallardo this season to because that guy looks like french toast.  Gotta have a lot of stop-gap arms if this season is playoffs or bust as it should be with the core sans Seager aging out. Gotta have enough material for a mid-season upgrade too, and the farm is trash especially once Moore and O'Neill get here.

Taking a draw at having another arm that can start lighting it up isn't a bad plan. De Jong is one of those accurate 4-pitch righties who just got people out last year. It's a good back-end draw at the deck and didn't cost us much (at least from my biased POV).

As 'accurate 4-pitch righties' go, the 2016 De Jong had the slash line of an accurate four pitch righty.  8 strikeouts, 2.5 walks, 1.0 homers in AA at age 22.  One late-season game in AAA with 8 K's and 1 BB remind you that these minor leaguers are moving targets.  The same pitcher -- say, Tony Zych -- might be one thing in April and a completely different subject in August.  Unlike most of you, probably, I hadn't been tracking Chase De Jong in my spare evenings last summer, so couldn't tell you.

The Mariners' press release has a short vid, in which De Jong backheels his glove 1970's style, and then loosey-gooseys into a Jered Weaver-supple finish.  A nice touch is the flexed left knee, which speaks to his body control and power-to-weight ratio.  The pitches in order:

#1 plus-plus sinker - watch the catcher's late glove stab  (or who knows, maybe this is a hard changeup, it dives so much)

#4 plus, painted fastball I'll take about a million of 'em

So on the "promo" video, De Jong missed by 1-2 feet on three of five pitches, and yet all of them were in the strike zone.  You assume that with a kid like this, you send him out to pitch and see if the "hit the mitt" rate goes from 50% to 60% to 75%.  The Mariners have a blinkin' lot of pitchers to monitor on that scoreboard.  Dipoto is saying that De Jong's chance of improving his "mistake avoidance" is superior to some other similar pitcher's.

The legendary John Sickels wrote De Jong up just a coupla weeks ago:

13) Chase De Jong, RHP, Grade B-/C+: Age 23, acquired from Blue Jays for international bonus money; posted 15-5 record, 2.82 ERA in 26 starts between Double-A and Triple-A with 133/40 K/BB and 112 hits in 147 innings; well-built at 6-4, 205; many scouts are skeptical because fastball tops out at 92, along with curve and change that draw average grades; what he does offer is excellent command and two years of statistical success; back-end starter projection due to command. ETA 2018.

ABOUT that 15-5 record.  This was Lou Piniella's "secret weapon" for identifying his pitchers -- he wanted starters with a track record of success.  Saberdweebs would consider it unspeakably naive to chalk up a AA pitcher for 15 wins, but then again Lou was unspeakably naive.  As well as being more of a baseball legend than most saberdweebs.

Pinellas was terrible at finding pitchers

And even worse arty managing them.   The "magic" he worked with luminaries like Solomon Torres, Steve Ontiveros, Ken Cloude...do we recall it?   That isn't the guy in trusting doe scoring pitchers correctly.  :)

Now if we were talking about a young hitter......

Not a bad look here.

P3.  Bamboozles him with a perfectly spotted FB, when he was looking for something out of the zone.

Same - I cut that out of my random paragraph

Some mix of Franklin and Pineiro would be fine for what we paid.

There is some A/AA indication that De Jong is sort of an innings eater.

Franklin turned out to be a pretty good bullpen guy late in his career.

De Jong's change/sinker appears to be a decent weapon of sorts.

I hope we stack all our young arms in Tacoma.  Let them compete.

I'm betting on a win by Moore.

My comparing him to Franklin isn't a pejorative...other than that he has limited to no upside and is exactly what he is (other than maybe refining his command another tick and, thus, reducing the flyball rate?)...he's a #4/#5 SP and a reliable "non-stink" arm.

I got that, Matt.

Knew where you were going.  And agree.

Just wanted to point out to all that Franklin was, indeed, "non-stinky."

De Jong is a classy young man so hope the best for him. Potentially fun year ahead for the M's so looking forward to following from a distance through all of you!!!