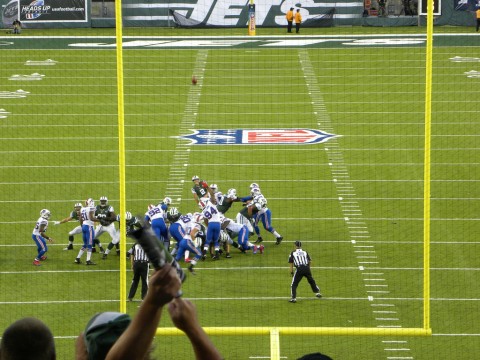 Dr. James has graciously given SSI permission to excerpt his site.  In the currently-public section of Ask Bill, he says

In the 1983 Abstract (first one I read), after describing baseball in the 1960s as "the most [desperately - jjc] boring brand of baseball ever conceived of," you wrote, "If I never see another Dave Nicholson, I think I can live with it." Do you ever have flashbacks in the current era while watching the likes of Mark Reynolds, Adam Dunn (especially thinking of his years with the White Sox) and Chris Carter?
Asked by: BobGill
Answered: 6/22/2015
Yeah, well. . .I certainly hated watching Adam Dunn play. He had some impact years, but he was absolutely terrible to watch.

This is an interesting sports concept.  The idea that somebody can be (1) good and (2) no fun to watch.  It is the job of the administrators to minimize this.  The NFL will make 15 rules changes per offseason, fighting against the combatants' natural tendency to win boringly.  For example, you did not enjoy watching points after touchdown kicked, right?  Bang!  That rule is different now.  It's almost weird, how willing the NFL is to change its rules.  Let's try an oval field, what say.

Major League Baseball, of course, is insufferably arrogant.  It imagines that MLB was birthed in near-pure form, and that any suggested rules change is 99% likely to corrupt that which has been heaven-sent.  The rigidity of its structure --- > creates a tensile fragility that leads to severe fractures, such as the National League basking in the fact that it is the only league in the world to make pitchers bat.

In other words, if the game would be more fun to watch with fewer relievers, then you should change the rules.

Take it from here Dept:  I'd really enjoy seeing an SSI reader list the current M's that were most/least "Artificial Turf" players.  And/or his list of M's who were most effective - least fun to watch or vice versa.  Mark Trumbo has always hit me as a guy who was pretty decent, but also not a lot of fun to watch.  There have been a fair number of these guys lately, the Corey Harts and so forth.

Application 1:  In Safeco Field, there is a lot less happening than there is in Fenway Park.  M's management has, as a group, imagined lower-scoring baseball to be more "pure" baseball ... we should say that to their credit, they have moved in the left field fence.  But the point is:  you might very well want to take a moment to remind yourself that road Mariner games -- especially in small parks -- are basically fun to watch.

Application 2:  I just now realized that yesterday's 43-pitch bottom of the first, although it was pregnant with Mariner possibilities, was actually no fun to watch.  Walks are great, but they're the foul shots of baseball.  :: shrug ::  Don't oversell the point.  But Mike Zunino is okay wit' me.

Application 3:  Glove-first players -- that is, UZR-based Fangraphs heroes -- might be in individual cases kinda fun to watch.  We can all appreciate a diving catch in the gap.  But I challenge you to name a glove-first player, not a catcher like Molina or a shortstop like Simmons, who over the course of 162 games is more enjoyable to watch than is Nelson Cruz.

I don't say that the Casey Kotchman / Endy Chavez 513-run approach might not be effective.  I just note that it kills the product.

Right now, the Mariners have a lot of players who are fun to watch.  Brad Miller, it's really fun to watch him swing the bat; it's even kinda fun to watch him YIP a smooth rolling groundball just like Dr. D would in a softball game.  I don't know whether bat-first players win pennants, but I do know that life's too short to be without them.

That's some of the best stuff:

These 10 pitch at bats in classic Kyle Seager or Seth Smith style is some of the most entertaining stuff.  It is much preferred to inning ending ground into double plays and one hoppers to the first baseman.  That's bad baseball.  My eight year old kid can get into an 11 pitch at bat.  "What happens if he fouls it 75 times"?  "Nothing, the game goes on."

There is such a thing as boring yet effective style.  Check the MMA career of Cole Konrad.  He wasn't a good interview, his muscles didn't bulge, he didn't hype a crowd, and he never lost a bout.  He was the Bellator champ before he retired, and the UFC stayed well away from him in favor of more exciting brawlers.

We like moon shots, swinging strikes and doubles down the line, but at the end of the day, we will take our winning however we can get it.  If the Mariners win boring or ugly, then so be it.

Actually I spoke rashly, now that you point it out

That particular game had long AB's with zero results, sort of amplifying the season-long frustration.  And Adam Dunn's pitch-stalking results in the Three True Outcomes stuff (200 K, 40 HR, 80 BB per year or whatever) which is different from a deep at-bat itself.  I was confusing deep AB's (generally fun if your team BABIP hasn't been .158) with Rob Deer / Steve Balboni baseball (which I don't even dislike nearly as much as James does).

I enjoy watching Seth Smith hit for sure.  To say nothing of watching Edgar Martinez hit.  Good counter amigo.

I've always thought that winning was fun to watch!

Nicholson is a funny guy for BJ to mention.  He played for three good White Sox teams ('63-'65) but he was only a fulltime player in '63....a year he hit 22 homers and K'ed 175 times (leading the league in the later).  Other than that, he was a part-time player throughout his career and generally not a very good one.

Reynolds K'ed even more, walked less and hit fewer homeruns.  He was the classic slugging CIF/dual position guy.  I always thought he had value.  He was individually less fun to watch than Dunn, but he played for several pretty good teams.  I would have thought he was valueable, whacking 30 homers.

I'll gladly take a bunch of K's, along with a bunch of BB's and an boatload of homers.

Were Adam Dunn a LF'er and playing for the M's, we would all be in love with him.

You did yourself a disservice by not quitting after the first line.  Epic.  And yeah, the only (or main) time I enjoy watching the 2015 M's is when they have a lead.  That's two comments in a row where I got my scoop shot swatted into the 3rd row of Staples :- )

I don't find Miller fun in the slightest.

I find him frustrating, obnoxious, and stupid.

Sorry, Doc.  He makes too many really dumb mental mistakes while hitting, while fielding, and while running the bases.  I *hate* players who player like morons.  Cano is annoying me a lot this year, for example, even though he is not normally the type that does.  What I want from players is that they be dynamic, skilled, and sharp.  That they take every moment of every game seriously as much as humanly possible, and that they not beat themselves.

The charge of "not razor sharp" and relatively "unskilled" sticks.

It didn't diminish my joy in The Logo in the big picture, but that's a chewy 'put amigo.  +1

I loved watching Brendan Ryan playing. Sure he could not hit but many times a game he would do the most amazing things you'd never seen before.  There's definitely something to be said for watching someone be the best in the world at their position.   It's just too bad for him that he didn't play on the Red Sox or something. Where his bat would play.

Jack Wilson even more so

The way he moved was just a revelation.  And SS's get 5 balls a game.  Definitely the position at which glovework can be a nightly treat to watch.

Buhner was fun to watch, as was Cammy, for me.

But I see the spirit of your point, Doc.  For me, the bigger issue with Bone or Cammy was simply that they were sometimes asked to be more than they were (Cammy was asked to be a legit #5 hitter, for example, though Buhner probably had less of an issue with that given how deep the M's lineup was during his peak).

And yeah, the idea of exciting > excellent is one that has resonated with me since I was a kid.  Watch the UFC and you'll see TONS of guys who grind their way to a victory (this accusation used to be exclusively leveled against white wrestlers, but many Brazilians are playing the same game these days by sitting back, waiting for their counter opportunity, and when it never arrives they sulk off into the corner and blame their opponent for not hanging their chin out and making the result 'exciting for the fans').

Heck, watch Floyd Mayweather if you need any more examples of this.  He's *NOT* fun to watch box, but he *IS* fun to watch simply master everyone that steps into the ring with him.  The style is utterly abhorrent, but the body of work demands respect even from casual fans like myself.  He's not undefeated because he's been lucky (though I still thought Oscar got him...*grumblegrumble*), but rather because he's simply better at this than every other boxer on the planet.  What Floyd's done is cast himself so effectively as the Bad Guy that everyone *WANTS* to see him get his mouth shut, so they buy the PPV in spite of the rotten taste he left in their mouths the last half dozen times they did the same thing.

This is part of why Mike Tyson still generates a positive reaction from fans.  He was excellent *AND* he was exciting.  It's a rare combination (like Bonds was, or maybe could be still if they'd let him back into the game...*grumblegrumble*) and when we see it, we all recognize it.

Bonds' collusion complaint is legit.  He states that no team would sign him for the 2008 season.  Including the Mariners.

So in 2008, Barry Bonds couldn't beat out Brad Wilkerson for a job?  He is tied with Raul Ibanez for longest hit in Safeco history. I think he only played a couple of games at Safeco.  In fact, Bonds holds most hitting records everywhere.  He's Barry Bonds.  He had an OPS that exceeded 1 in 2007, the last year he played.  Banning Bonds from playing in 2008 and thereafter was wrong.

I truly hope that Bonds ends up

as a significant owner in MLB over this.  I'm not in a position to make actual projections as to his lost revenue following MLB colluding against him, but I have to imagine it's easily in the tens of millions -- and perhaps hundreds of millions -- of dollars when enduring endorsements are taken into account.

That was appalling.  And, much as I am loathe to jump on the 'racism' bandwagon, I wouldn't argue too long if someone suggested it was a component of Bonds' unjust treatment by the league.  That guy's the best player to ever swing a bat, period, and should be celebrated as such.  Go back and look at his BB/K ratios back when he was whippy youngster...he really did make Edgar look pedestrian, and that's ridiculous to even suggest.