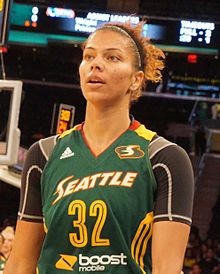 Sue Bird showed the world how much she appreciates National Bird Day with her fun bird shirt! Way to give the country the bird without being inappropriate! That tweet was particularly loved, with 30 shares and 80 likes.

Keisha Gatling shared some worrisome news, tweeting that her coach in Korea just quit in the middle of the season. She also says the team has been “practicing like crazy, but it’s the only way to get better.”

Quanitra Hollingsworth sent out prayers to all of the people impacted in the suicide blast in Istanbul. She emphasized her message with a hash tag: #prayfortheworld.

Abby Bishop gave us some more words of wisdom and tweeted, “Wherever you are, be all there.” Her message comes at a great time, when people are making resolutions to ditch too much tech, to be more present or mindful and to really give everything all you’ve got during the New Year. We also got to see some of Bishop’s photos from Rio!

Jewell Loyd praised her crew as the best in the world.

Alysha Clark was hilarious today in a tweet that simply read, “Got pooped on by a bird today.” She also mentioned entering the lottery, because, “Why not?”

Jenna O’Hea showed a photo of her dog off to Twitter, saying, “He’s a naughty puppy but just so dang cute.” Somehow the dog had locked himself in her closet and chewed everything to bits! The dog’s name is Kosmo.

Ramu Tokashiki was hailed on Twitter this week for leading the JX-Eneos to the coveted All-Japan Title. She was also selected for the Best 5 Tournament Team, yet another awesome accomplishment under her belt. A fan favorite in Seattle and Japan, Tokashiki seems to never quit with her endless energy.

The Storm let us know that Jewell Loyd and Crystal Langhorne played in a Euroleague mashup earlier today! Did you catch the game?

Storm fan Joseph Agpaoa tweeted that he was just hanging around with his collection of Seattle Storm bobble heads! How many have you collected, Storm fans? Agpaoa has quite a collection! The Wright and Bird bobbles are particularly cool.

These are always fun to read.

These are always fun to read.

I liked them too!

I liked them too!