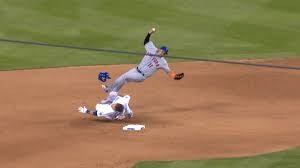 MLB-TR reviews some of the logical trade targets the Mariners might chase if they are seeking a 2B and keeping Gordon in CF.  I'm not sure this is the direction we go, but it is worth visiting available Cano replacements.

Logan Forsythe, Dodgers:  It appears that Forsythe is available, but  he's been in a two-year slump and it is probably only 50/50 that he's much better of a hitter than Beckham.  Forsythe was a + 2B bat in '15 and '16 (.804, .778) for the Rays, but fell to .678 last season and has been terrible this season.  His $9M salary is just about what the M's are saving with Cano suspended, so he very affordable, which include the likely low trade demands the Dodgers will have.  He generally a + glove, so he has that going for him.  All the same, betting on Forsythe is like drawing to the inside of a straight.  It's possible we go this direction, but he's not my favorite bet.

Neil Walker, Yankees:  He's slumped badly in pinstripes, hitting .210-.300-.257, but he was a good bat in Pittsburg and with the Mets.  Just last season he was a .801 guy.  He's only 32 so it is unlikely that he's forgotten how to hit.  He's been a decent glove (until last season) and a quality MLB'er.  He's not my first pick, I suppose, but I think he's a betting favorite if we go the 2B route.   I would expect the Yankees to ask for something decent.

Devon Travis, Toronto:  His bat has totally disappeared over the last two seasons as he has been fighting injuries.  He's cheap ($1.4M) but i suspect the Jays would want something useable in return.  He's only 27 and once was a pretty good stick.  He's worth a bit of a gamble but gambling is not really what the M's should be doing.  He's not our guy.

Yolmer Sanchez, White Sox:  He's been a 97 and 112 bast over the past two seasons, but his career # is 82.  He's principally a 3B this season, but was at 2B most of the time last season.  Because it appears that he's figures something out at the plate, I would imagine the White Sox would want something prospecty and valuable for him.  He's going to get $5-6M expensive next season, maybe more if he keeps hitting.    He's played some MLB SS, so he's a potent utility guy, even if he doesn't start.  He's started to sort of rake vs. RHP, but he's also a home dog who struggles away from Chicago.  He's worth getting, but at what price?

Starlin Castro, Marlins:  He gets nearly $12M this season, so he fits inside the Cano savings.  Next year he is going to cost $18M unless you release him for $1M.   He was a good SS, back before he made the switch to 2B, and he's a .282/98 hitter with double digit homer pop.  Castro is a great guy to get, and he's not going to cost you TOO much, as Miami is unlikely to pay his $18M salary next season.  First guy into the Castro sweepstakes might get him.  I like our shot here.   He's not my first choice, but he might be my 2nd.

Scooter Gennett, Reds:  Here's the critical thing about Gennett:  He's not just a Cincy band-box hitter.  His bat has played well on the road, really well.  Last year he hit '815 away, this season it is at .848.  He's not a + glove, but his bat more than covers for that.  You would have him through '19, but at an arb price north of $10M.  Interestingly, his most similar batter through age 27 is Neil Walker.  He played 10 games in the OF last season, so he has some stay-in-the-lineup ability even when Cano comes back.  He's a career .815 bat vs RHP, albeit in Milwaukee and Cincy.  All the same, he would be a heck of an addition.  He will require a significant offer, in terms of prospect cost, and you only get him for 2 years, but Scooter Gennet is my first choice if we go bold as we grab a 2B.

Were I a betting man, I think I might bet first on Spangenberg (Dipoto betting on a bounce), then on Walker and Castro, as the most likely guys on this list.  For me, give me Scooter.

But were I a betting man, I would bet we go get a COF.

Your mileage may vary.