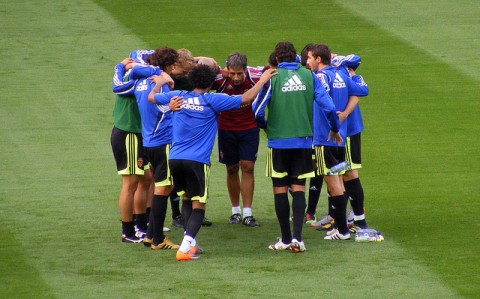 For years, Spain's national soccer team played some of the most attractive soccer around the world, ushering in a dynamic passing scheme known as tiki-taka. This while also winning every signifcant trophy available from 2008 - 2012.

They fielded the best midfield in the world, with enough top talent to fill multiple national squads. Xavi and Iniesta were a duo that was able to perfectly conduct a masterpiece of an attack that resulted in vicotry more times than not. Lately though, as the golden generation of La Roja has aged themselves into the sunset, now former Spain manager had trouble transitioning the team into a new era and it showed in the results.

He held onto too many ageing stars, and failed to get new parts such as striker Diego Costa to mesh with the scheme. Thus, their showing in Brazil at the 2014 World Cup finals was the definition of a flop. At Euro 2016 they teased everyone with a flash of their former brilliance but flamed out in the quarterfinals.

Fast forward to fall and former Porto manager Julen Lopetegui replaces del Bosque and gets to cut his teeth with qualifiers. And against Macedonia, it looks like he is doing an ace job in selecting a squad, and getting them to play together. So many we have seen hoist trophies before were absent, no Iker Casillas in front of goal, no Gerard Pique or Sergio Ramos along the back; Xavi, Cesc Fabregas and Iniesta no longer in midfield. Only David Silva and Sergio Busquets can claim trophies to their name against the starting XI Saturday.

Granted, Macedonia was never going to the most challenging side for Spain, no matter who Lopetegui threw out there. Even so they were back to being dynamic, quick and clean. Silva provided his trademark dives in attack from wide and Vitolo played the game of his life.

Making his eigth appearance for the national team, the Sevilla forward netted a goal and had a few brilliant passes. Vitolo's performance was noted by the crowd in Granada, as they gave him an ovation when he came off for Granada native Jose Callejon.

This new era has the talent to emulate the previous generation, as many of this batch - especially in midfield - came up together in the youth ranks, winning everything in sight there as well. Now it only remains to be seen whether or not Lopetegui and company can do this in the final stages of a tournament, and with hardware on the line.