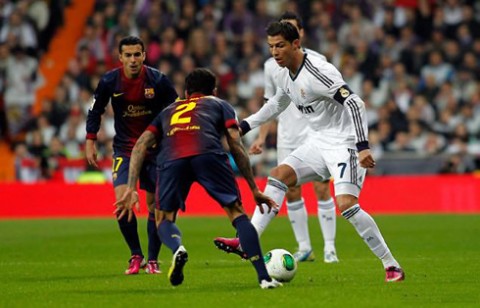 Real Madrid face a situation that they have not seen in about 12 months, that is hoping back into the La Liga race coming off back-to-back losses. And of course as is typical with a rough patch at the Bernabeu, fans have plenty of blame to dispense as they see fit.

Coming off a loss in domestic league play to Sevilla on Sunday, Madrid came back home to the capital to host Galician side Celta Vigo. Vigo did surprise some people last season, nabbing a Europa league spot in the process.

However they lost their best player in Nolito, who jumped at the chance to play for Pep Guardiola at Manchester City.

On the otherside, Real Madrid’s best player Cristiano Ronaldo was as ineffective as he’s been all year, and is taking heat for Los Blancos’ slide. Playing in the no. 9 role against Celta, he did not trouble the keeper as much as a goal scorer of his stature in the game should have, no matter his position. Though this season Ronaldo has noticeably lost a step. He no longer possess the track star speed he could always depend on to blow by defenders and create chances. At times he has shown veteran savvy, getting himself into position, and he will need to evolve that part of his game more as he ages.

Down a goal 2-1, he took out forward Lucas Vazquez for Mateo Kovacic, understandably trying to shore up the defense. Karim Benzema did eventually find his way onto the field, but with only 10 minutes to go, hardly enough time for a player with the style of Benzema to be effective.

One thing to keep in mind is the fact that the Madridistas did not have the benefit of having a Christmas break thanks to participating in the FIFA Club World Cup – in addition to playing in three major competitions. Zidane has done a good job of getting his stars rest in the mid-week ties until the Champions League starts again, but will need to choke off the slide today against Málaga. Maybe a return to their old tactics could remedy the spell.