Skip to main content
Sabermetrics
The 'Best Young Player in Baseball'
Up, up and awaaaaaay .... on the age curve, that is 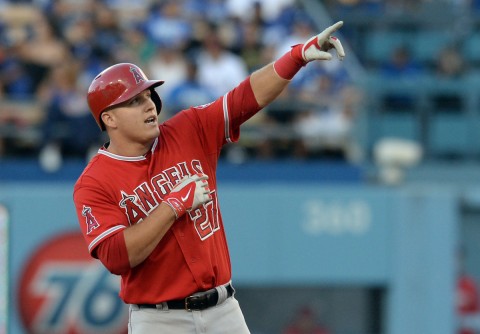 Bill James just now wrote a fascinating article, with a good handful of takeaways for the longsuffering Seattle Mariner aficionado ...

Mike Trout has been The Best Young Player in Baseball for about four years now, a title that will pass away from him within the next year or so because, at some point, you’re no longer young.   In fact, Mike Trout has probably held the title of The Best Young Player in Baseball longer than anyone else has ever held it.   Joe DiMaggio didn’t hold it that long because, after three years, Ted Williams came along, and Williams was four years younger and about as good.   Willie Mays didn’t hold it that long because he spent two of the years he would have held it out of baseball, in the Army, and also there was Mickey Mantle and then there was that fantastic 21-year-old season by Eddie Mathews.

I made up two formulas to determine who was the Best Young Player in Baseball ....

1.  After he created a system for measuring this, James found that --- > "The Best Young Players In Baseball" turned out to be guys named Rickey Henderson, Cal Ripken, Manny Ramirez, and Ken Griffey Jr.

You would expect this to happen "often," like you'd expect Marshawn Lynch to break 10-yard runs "often."  You might not expect it to happen "often" in the sense that Marshawn Lynch hits tacklers "often."  Bryce Harper is the Best Young Player In Baseball right now, and that means he's got a good 70% chance of making the Hall of Fame.  That means he's going to get 3,000 hits or 550 home runs or have a candy bar named after him or take your pick.

I'm not a Mike Trout fan, and I enjoyed reading predictions (after his 2nd year, let's say) that there were chinks in his armor.  But the truth is, he's got a whale of a shot to be one of the greatest players who ever lived.

This is the kind of thing that James learns, by not getting anal-retentive over math.  He uses kludgy points system, he draws a rough-hewn triangle around the issue, and then he learns things.  He has learned HOW many things, exactly, since 1980?  How many things about baseball did your or Dr. D learn since 1980?  I don't see how you skip the $3 to read his site :- ) he ain't gonna be around forever.

Back to the point.  This a life lesson.  Perfectionism slows you down.

3.  History's BYIP lists are strange:  they consistently swap out from one year to the next.

Except there were three guys who owned it a long time:

In other words, the 1990's Mariners had THE best young player(s) in baseball the whole decade.  And they had Randy Johnson, and they had Edgar.  They were spotted 50 meters in a 400-meter dash the whole decade, and they won doodly.  It's part of the legacy:  a nice night at the park and watch the World Series on TV.  The same folks are running things now.

4.  The Mariners have a Good Young Player In Baseball.

Benihana had a witty phrase for baseball fans who focus too much on "The Great White Whale," a 5-WAR young player that you can underpay by $20M and laugh all the way to the bank.  He's right, of course.

Still, when a player is real good real young --- > he's gonna be real good, period.  With baseball hitters -- not pitchers so much -- you can't forget that the ability curve tracks upward like a rocket against his age.

< Previous post
First Mariner Who Was Younger than You
Next Post >
The Best Young Player on the M's
Blog:
Sabermetrics
Tags:
Bill James
Brad Miller

James pointed out long ago, back in those 80's Digests, that great hitters, career great hitters, get to the bigs in a hurry.  Usually they are there by 22. Or 21.  Edgar was an outlier, but that's because the M's couldn't see/believe what they had hidden up there in The Great White Frozen North.

So, generally not a lot of guys get here in a huge hurry.....and the ones that do are usually destined for minor/major greatness.

Being TBYHIB is a big thing, then...because young hitters (who stay here) are generally pretty great.  You're the best of the best, in a sense.

We had two for a decade and didn't win doodly!  That's a great point, my friend.