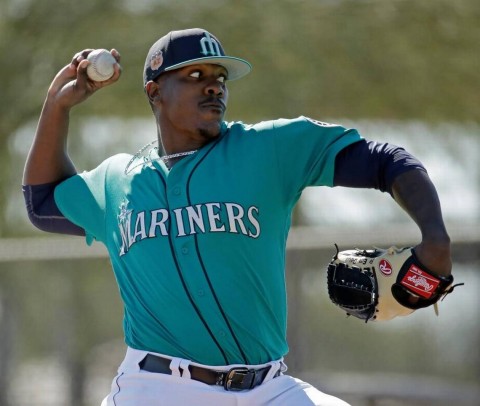 Out of curiosity :- ) I wondered how Armando Benitez performed when he first came up.  (Pattern recognition and all!  HEH)  He sliced and diced in his 1994 late-season callup, 14:4:0 in 10 innings pitched.  Just offhand I'd guess that a Vieira type (or Edwin Diaz type) tends to do well his first MLB month if he controls his emotions.

The Mariners have been pursuing Ervin Santana but the Twins are hesitating based on their success in the WC race.

Chris Costillo, after Ryan Divish, lists 8 starting pitchers the Mariners are negotiating for, including Santana and Marco Estrada.

Bill James has an article up about history's 20-game winners, lead-in being "If you see a turtle on a fence post, somebody put him up there. The same with a 20-game winner."  And there's a list of pitchers who should have won 20 in some season or other, but never did.  Includes Kevin Appier, Zack Greinke, Jimmy Key, Tim Lincecum, Dave Steib (4 times!).

I think it's fun when we get MLB-, NFL- NBA-type endorsements of fun.  Here are some of the nicknames that will go onto the Official MLB(TM) Players Weekend Jerseys in Seattle:

Two guys out of 25 opted for jerseys with names like "GAMEL" and "ZUNINO."  Out-flank level coolness.  I mean, does "Senor Doble" really move the ratchet up from EDGAR

Terry reminded us about Iwakuma for the Mariners-Astros ALDS but Matt and I waved him away.  Jerry Dipoto then waved Matt and I away.

Here is Sully's two-hour chat from last Friday.  Sometimes you just want to crack peanuts in the bleachers and chitchat.  Sully's light tone and comprehensive knowledge make great bleacher fodder.  Or, as he put it, "Let's just go ahead and appreciate me for the next couple of hours."  HEH!  A man after my own heart

Chewing gum is very underrated.  It's in a general category of "Voluntary Rythmic Movements," like rocking a baby, like the steering wheel on a car on an open road.  I like a quarter of a piece in my front teeth while playing chess.

Not sure if this helps...

So we might be missing something in the translation or context for the Cano nickname.

I had never heard this!

Looking into it locally.

baseball gods tried to kill him on his first pitch but he somehow got his glove up. Maybe the tides are turning?