Skip to main content
Sabermetrics
... Or Not
Greed for success, Dept. 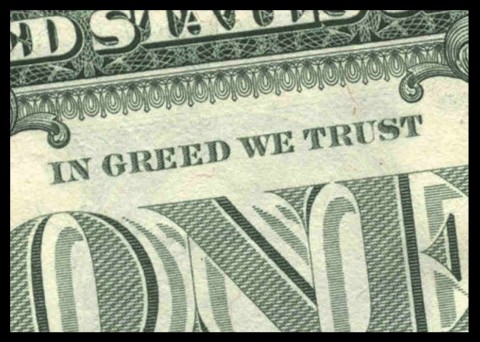 We axed, are the 2014-15 Royals 'anti-sabermetric' or are they not?  Dr. D is not going to resolve this with a mathematical proof.  That's point A.  What he will do, is point yer in an interesting direction.  There's point B.

Usually they prove this with an --- > industrywide study < --- .  They'll say, "The entire pool of major league hitters does not hit better in Game 4 after a 3-game hitting streak."

If you counter this by saying, "But this player over here had +125 points to his OPS in the clutch, his whole career," they'll say it's too small a sample.  Such a response closes the door to any idea that a few hitters can raise their games.  In fact, that's what Bill James found in his 10-part series on Big Game Pitchers, that guys like Bob Gibson and Mike Mussina raised their games when it was most important.

But!  Here is a great read on Grantland where the (dubious) "industrywide study" IS suggestive.  We'll slice the juiciest chicken breast off the bird:

I (Ben Lindbergh) asked Mitchel Lichtman, coauthor of The Book: Playing the Percentages in Baseball and a former Cardinals consultant, to investigate whether batters on either end of the contact spectrum have an advantage — or more accurately, less of a disadvantage — against the power pitching that’s so prevalent at this time of year. Lichtman defined power and finesse pitchers as those with strikeout rates in the top and bottom thirds of the league, respectively. He then classified contact and noncontact hitters as players whose combined walk and strikeout rates were in the top or bottom third. Finally, he dissected the stats to see how hitters of each type did against each group of pitchers from 2010 to 2015, using Weighted On-Base Average (wOBA), an all-in-one offensive rate stat on the same scale as OBP. For reference, the league-average wOBA over this period was .315. This table contains the results:

"Power Pitchers" is another way to say "Good Pitchers."  In the same Grantland article, they posted this chart: 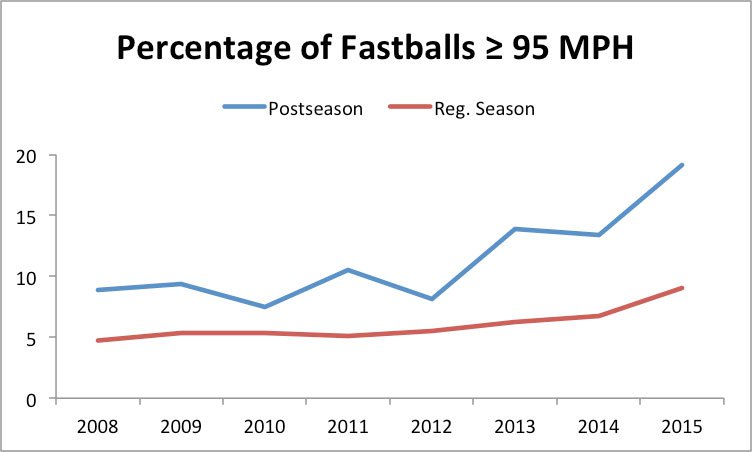 Yes, Dr. D realizes that there are caveats and quid pro quos to saying that "Power Pitcher" means "Good Pitcher."  But you should also realize there's a reason that --- > everybody in the playoffs throws 97 MPH.

So the Grantland explanation for the Royals' success would be, "Contact Hitters are the preferred type against Power Pitchers, and the Royals have that kind of hitter, and they have been seeing Power Pitchers."

Jeffy's explanation, in this Fangraphs chat, would be:

That idea ain't SSI's invention, as the alert reader -- say, John McGraw and Earl Weaver and Greg Maddux and Derek Jeter -- might have noticed.  ALL baseball men, that's A-L-L, "believe" in the idea of Tough Hitters vs Mistake Hitters.  Grantland comes perilously close to admitting this:

Glanville notes that the vulnerabilities of low-contact hitters are easier to exploit, although their strengths often do more damage. “I would think a lot of the big power guys — and we’re not talking about [Albert] Pujols and guys who are just exceptional, like Vladimir Guerrero — they probably have more holes,” Glanville says. “Because to make contact on a lot of different kinds of pitches, you probably have less holes. I’m not saying you’re driving those pitches, but you can make contact. I think it’s a unique skill, to be able to put the ball in play.” It’s not clear why power pitching would accentuate the weaknesses of one group more than the other, but contact hitters’ better bat control could help them handle strikeout pitchers’ predominantly faster speeds. The Cubs, for instance, seem to struggle against good velocity.

The aiki concept is "Greed for success."

Greg Maddux complained, when the Yankees continually spanked him in the World Series, that there just wasn't much he could do when Jeter & Williams & Posada were "willing to take what you give them."

The Adam Dunn TTO pitch-stalker wants 4 bases, not 1.  I dunno if that qualifies as ...

... But you can see that this concept OBVIOUSLY creates a distinction between hitters.  No matter what sabermetrics says at the moment.  There are 400-500 major league hitters at the moment, and you can line them up from left to right on a continuum based on how much they're trying to do in any one at-bat.

So here we are, locally, with a freshly clear memory of Mark Trumbo being -Greedy- at the plate in June, and being -Not Greedy- in August.  Leaving us where?

Longtime reader/highly infrequent community discussion participator (a time thing) Merrill Danford here, and I have a question, if you don't mind ...

I'm confused about the parts in this two-article series (the Grantland quote, above, and a bit of your writing towrad the middle/end of the last post) that seem to indicate that a high K rate is part of the "contact hitter" portfolio. I thought contact hitters were guys with both low K and BB rates. Am I misreading and/or misunderstanding? If not, sorry to ask for your time, but would you mind explaining the high K rate? Thanks, if so, and no problem, I get it, if you don't have the time ...

Low strikeout rates are what we mean by high contract rate. ... actually, high contact rate tends to refer to the swing rate on a swing-for-swing basis - Michael Brantley had a measly 3.4% swings and misses last year on all swings, and as we'd expect he struck out only 51 times all year.

Guess I musta typed a typ-o.  Would be easy for DiPoto to reduce K's if he wanted to.  Make Zunino a roving instructor, maybe?

(I had also been under the

(I had also been under the impression that "sabes" didn't like TTO guys because of the usually poor hit tool/contact rate, so, yeah, confused about that, as well ... maybe it's just me ... I don't DISLIKE them, per se ... )

Sabes *do* like TTO guys because they understand that to be (oh, say) 80% of what decides a game of baseball.

Interestingly, Dave Fleming has an article up now explaining why the Royals are a flier on this principle.  (They do everything ELSE great.)

To add to the previous

( ... I would just think that an overabundance of TTO guys in the lineup produces what I like to call MOOS, or, "Mariners Offensive Offense Syndrome," i.e., being in the league leaders in HRs but at the bottom of the heap in AVG, OBP, RBI, RS ... )

Whatever kind of player you've got, there are good ones and bad ones...

Thanks for the answers, much appreciated!

I think I was confusing

I think I was confusing "contact rate" (contact per swing, as you explained) with "swing rate," whether it be at pitches in or out of the zone.