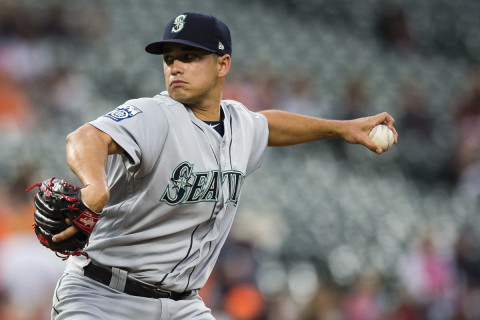 In setting his list for players who underperformed their rookie expectations?  James eliminated pitches from consideration, first of all because if you count them then they completely dominated the list.

Which might cause alarm among Mariners fans, since Marc-O Gonzales racked up 3.5 WAR in 2018 and we're hoping for a string of ten such seasons.

It's true any rookie SP has a Sysiphyus-style mountain to climb, but I like Marc-O's chances to zig and zag through the prevailing headwinds because:

(1) His head, makeup, and intelligence.

(2) His K/BB.  Marc-O finished #5 in the entire American League for control ratio, just ahead of Garrett Cole and just behind Luis Severino, at 4.53 strikeouts per walk.  When you can walk 1+ batters all season long, while fanning around 8 per game (7.83) you've got a pitcher I'll wager a few simoleons on.

(3) I like his mechanics, which start from his back foot and smoothly engage his whole body.

No guarantees anywhere, but if you've got a second Marc-O laying somewhere around the league unused, I'll take 'im off yer hands...

TRENDS IN THE INTENTIONAL WOK

This SI article points out that 1974 was the last time a ballclub issued fewer than 10 IBB in a season:  the LA Dodgers gave up 9.  Supposedly Mike Marshall was ordered to IBB an enemy twice and flatly refused.  "I've never seen an intentional walk work," he groused.

The SI article oints out that in 2018, all of a sudden, THREE teams issued fewer than 10:  The Yankees with 9, the Red Sox with 8, and the Astros with 4.  It reminds me of an old Bill James quip about Earl Weaver:  Q:  When would Earl issue an intentional walk?  A:  Whenever there was a blizzard in hell.

Excuse my lapse in decorum but the poetic impact seemed too much to resist.

You can look at Tom Tango's run expectancy chart rat cheer --and search for areas where adding a runner at 1B helps the defense.  Nada.

You can still imagine a situation where Mike Trout is at the plate, 1B open, and the IBB in order ... but it doesn't happen very often.

A random light bulb from BJOL:  it could be that the upward push in strikeouts, industry-wide, is finally diminishing.  James points out (among many other things) that --- > the 5 teams in MLB which finished lowest in batter strikeouts did pretty well in the standings.