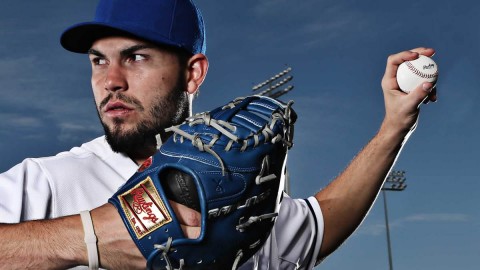 Dave Fleming just lobbed in a bright little post on the Royals' dynasty.  He leads off with this mortar, sailing over our heads and into our back yards:

Let that sink in a minute.  After the Royals won the pennant in 2014, absolutely NOBODY thought they could do so again.  Now here were are, at "again," and they were more impressive than ever.

The Royals were 7th of 15 teams in OBP, were 8th in strikeout rate.  (This was based on having the very lowest VOLUME walk and strikeout rates.  Picture them swinging at the first pitch of the at-bat and being safe or out at 1B.)

In pitching, they were #11 in strikeout and #12 in walks.  (Picture the Royals' pitchers throwing Ball One or Strike One, and then the enemy batters putting the ball in play on the second pitch).

Now, in contradisctinction to that, you have Bill James proving that "Strike Zone Winning Percentage' is a great, GREAT way to predict winning percentage.  He took this formula:

As he explains, when you pitcher gets a K, that's a win; when your batter gets a BB, that's a win.  So Bill is counting "plate appearances wins and losses."  Notice that he does even bother with Home Runs, the third leg on the TTO stool.

Maybe it was this December 2014 James article that locked in DiPoto's core baseball philosophy.

BIRDWALK FOR A COOL LITTLE VISUAL

When he tried to explain the 2014-15 Royals, Fleming had asked us to picture baseball rosters as a dart board:

To buttress his lofix, Dave asks us "How much do real teams PAY for each of the above circles?"  He's right.

Funny thing is, the 2015 Royals were mediocre at EVERYTHING in the first circle.  But they won 95 games in the regular season and then 11 more in the playoffs.  And! Every team they beat in the playoffs DID have bullseye skills.  Sez Dave:

The Houston Astros are a great slugging team, and they couldn’t beat the Royals. The Blue Jays had the most potent offense we’ve seen since the Cleveland teams of the mid-90’s. Toronto also had a Certified Ace David Price. The Royals beat ‘em. In the World Series, the Royals faced a team with an incredibly deep rotation, and a surprisingly potent offense, and they beat ‘em in five.

And, he points out, the Royals were almost impossible to beat in the 2014 playoffs, too.  We're not just looking at one wonky playoff run.

As Fleming argues now, and as James argued in December 2014, it IS possible to win so many of "the other battles" that you overcome your deficits in the most important battles.

For the Royals this was:

He also makes the very provocoative comment that as K's rise, the value of a contact hitter also rises.  In your slo-pitch league, NOBODY strikes out, so there is zero value in a sharp ground ball.  In the majors, the K% has gone from 16% to 20% in ten years.  Maybe a Ketel Marte type is worth more now than he was 10 years ago.

Fleming's theory is that baseball is moving toward --- > contact hitters being more important (unless baseball does something about 20%+ strikeout rates).  And Fleming thinks that bullpens are definitely being weighted much more heavily as one year goes to the next.  The 2014-15 Royals were able to body-surf this crest.  It gave them an edge.

And the corollary is that it is a safe bet that a guy like Pizzano (who owns the strike zone), Tyler Smith (who leases is) or Ramon Flores (somewhere inbetween) is worth more to a DiPoto than a Jack Z.

Helps if they have a glove, of course, but those guys are right up his template alley.  I highly approve.

Pizzano and Smith may very sell see a stock uptick

And, where would you put those two in terms of "percentage players"?

Hey Bill, not exactly a question, but a comment about our friend Alfredo Griffin. If memory serves, in 1981 he had the lowest batting average of all qualifiers, AND led the league in errors! To top it off he was 3rd in CS, despite being @30th in SBs.
Asked by: gregvanv
Answered: 11/4/2015
Yeah, that all checks out. I remember that I used Alfredo and Ozzie Smith to illustrate a point: that Ozzie and Alfredo were extremely similar players, and people thought of them as similar players, EXCEPT that Ozzie was a GREAT percentage player, and Alfredo was among the worst percentage players of all time. Alfredo was like the crazy guy in your poker game who will bet the limit 50 times a night, and he's not EXACTLY bluffing; it's just the way he plays.