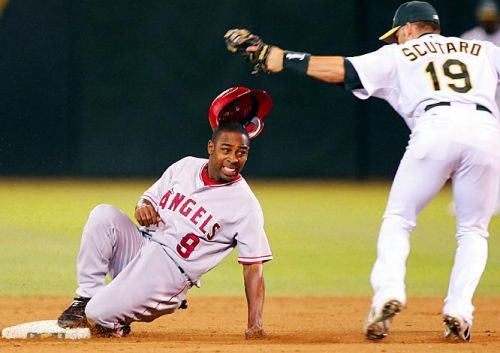 Q Rockies Jeff:  I've seen a lot of Reynolds and seen everything on Stewart.  Pass-a-deena.

The free agent market is thin at 3B this year, and a lot of the cheap options look too flawed. The takeaway point:  Go big or go home.  There isn't a lot of point, bringing lukewarm veteran 3B's into this young, dynamic roster in flux.

If you can go after a David Wright magnitude option, fine -- else the in-house options, short-term and long-term, are the way to go.

Zduriencik's job becomes more Stars & Scrubs as he goes along:  his job is to either to (1) convert quantity into quality, dealing 3 possibles for 1 certainty, or (2) use his draws at the deck, his fungibility, to give him production...

Looking at it from this paradigm, the Fister trade stings quite a bit.  The Mariners have to fight the drift of their talent towards 30 comparable players at the 10-40 spots on their roster, and here they are trading their #5 roster player for several more #25's.

Q Moe:  Figgins is still breathing; isn't he a possibility?

PTI Jemanji:  All y'all been listening to Baker Live! any?  There is a serious school of thought, internally at Royal Brougham, that Chone Figgins needs only to bat #1 to reclaim his Angel glory.

The variations are baffling, and this time I'm saying it as a chessplayer -- without his tongue in his cheek.  I've had Sicilian Dragon middlegames that were easier to cut through, than this 40-man roster situation.

What a comment on Jack's talent proliferation.  The good news is, basically he does not need to calculate the best player; basically it shakes out for itself, in results on the field.

As Billy Beane said, you play the first two months to see what you have, the next two months getting what you need, and two months playing with the team you want.

Great point Jeff....you must be a bear to play chess with!!!  Always several steps ahead!!!
It was fun to see Fister succeed. But two #25's don't offset the one #5! Don't give up your queen for a few pawns!!!
I enjoyed read through all of these. Thank you!

I worried about Figgins

I worries me that Baker Live! has been more accurate than not or the past few year... and that he believes or he is being told that the Mariner Brass is giving serious thought to having Figgins playing meaning playing time in 2012.
I liked the signing of Figgins.
I questioned but understood the backing of Figgins over Wak.
I was guarded with giving Figgins 3B without much of a back up plan for 2011.
But for 2012??? I hope not.

Unless those pawns become queens themselves (for example, Carp/Vargas/Guti (first year at least) from the Putz trade.

Check's in the mail

::title of a famous postal-chess column in Chess Life & Review::
As y'know Jeff, I would look forward to your ideas even if they weren't laced with such generous encouragement...
Especially you can't trade a Q for three P's, if you are allowed exactly 25 pieces of any type...

And I think Zduriencik believes that he traded a 5-point Rook (Fister) for a 3-5 point Bishop-or-Rook (Furbush), a 3-point Knight (Wells), a large 2-point Pawn (Ruffin) and whatever Martinez is...
At that kind of return, you wouldn't worry about the 25-piece limitation problem... question is whether Fister really is a loose comp for Furbush...

Well, he circulates around the execs and players

So is in a genuine position to get a feel for where the shot-callers are at on this or that position.
Baker isn't simply calling a Cheney-level scout to get the lower-level employee's opinion on what Zduriencik *should* do.  He's around Zduriencik and Wedge themselves on a day-in, day-out basis.  And Baker happens to have a feel for a baseball clubhouse, what is meaningful and what isn't.
On Baker Live! he didn't exactly predict that Figgins has the 3B job next year, but he did indicate that they are mulling over the question of whether Figgins would rebound as a leadoff hitter next season.
Hence Baker's consistent pressing of his opinion that Ichiro should probably not hit leadoff in 2012.

I'm not buying that Figgins

I'm not buying that Figgins inability to hit was simply because he can only hit if he bats #1.
Figgins was just bad.  Well, he's been just bad for two years.
But, he is still breathing, and we still owe him a whole big million bunch of clams unless we can find some sucker....er, sharp GM who recognizes that he's about to hit again.
Ergo, he's in the picture.  We're not writing off the clams and we're not finding a sucker.....er, taker.  You guys know my take on Figgins:  Since, 2006 he's had one year with a BABIP of a gazillion and one year where his walks were nearly 40% higher than he's had in any other year in his career. He can not duplicate either.  They were total outliers.  He's only a so-so basestealer, and in his last 1000+ PA's he's had 37 extra-base hits. There is no Figgy bounce because he just isn't very good anymore.
But he's our 17 million clam man, so we're pretty much married to him. Ergo, because he's still breathing, he is (hypothetically) still in the hunt.
If Baker is saying that there is serious Z/Wedge thought that Figgins plays 3B and leads off then there is a bright side.  I would assume that means they think Seager is locked in the lineup....at SS.
But Figgy ain't the 3B guy.  Safe bet.
moe

Jpax, so true. And you never know until you actually do it and then see it play out. Even in your example, everyone would have considered Carp the least of those three but might end up being best surprise.

Is that what makes baseball fun to watch? Who would have guessed when the Phillies signed Lee that they would get a longer vacation? Maybe go on a short getaway with the Yankees? It makes it fun to wonder what player will go from a Baldwin into Boardwalk, especially when you know many will go the other route.
Encouragement works both ways, thank you Sir. And it is a treat after a long week to sit here and read all the threads. Especially after we just got dumped on with snow!

2010 blueprint isn't flawed if it's implemented and improved

Defense and OBP is still good stuff. In 2010, Figgins, in a down year playing out of position, had 74 walks and 42 SBs. If Ichiro rebounds and offers production at #2, can you see similar numbers being useful at the top of the order? But...we now have a real supporting cast: Ackley at 2nd instead of Lopez, Smoak at first instead of Kotchman, Carp instead of a Bradley, Wells instead of Byrnes, Seager/Ryan instead of Wilson. Pineda instead of Lee - that's a downgrade, but not by too much if a Bedard returns for a good first half. There's no RRS or Snell stinking up the back of the rotation. Olivo adds power as well, and the youngsters are better all around.
The fault of the 2010 model was not Figgins, but a lack of power, and true MOTO guys. If it clicks early in the season, Figgins even becomes a valuable chit for a team missing a leadoff hitter. If it doesn't, you have options for 3rd on the farm.
But get those walks that Figgins has produced all his career at the top of the order. Folow them with two bat maestros and Smoak, Carp. Recapture that good 3rd base glove for your young pitchers. Give it a month and a half. If it's a disaster, jettison and go to plan B.
If we got money to spend, it might do well to keep it in the bank after the first 2 months, and after we see what we got, go for what we need.

Here is a concise summary of the various reasons why it could line up.
In a situation like this, the basic holdup is whether the M's pay $5 or $7M per season of his $9M salary, or whatever the #'s are.  The finger-trigger games often go down to March, 'cause cash is still a commodity that talks...
If I'm an NL team needing a leadoff hitter and 3B, I'm looking at Figgins as a real chance to unearth a Moneyball type commodity.

Lot of sentiment for bringing Figgins back to his game

From my standpoint, his listless swing creates the low BABIP which in turn drives the lack of BB's.  No sense walking a guy who's never going to hurt you anyway.
But Figgins did look rejuvenated when he got that chance to hit #1.  Maybe for him, the "change of scenery" is a return to his favorite role.
........
One thing I can NOT understand, is why baseball players are so precious about their roles.  Sports is sports.  John Havlicek and Freddy Brown didn't start shooting 18% from the field when they were moved to 6th-man status.  :- )

...if we can get someone to spend $8-10M over the next two years and send Figgy their way. That saves us $7-9M.
I think a lot of team are going to be very leery of him because of the 2nd year in that contract, however.
If he contines to bomb, you're stuck with a useless player in year two.
And there comes a point where the saving to the M's becomes so small that you may as well just keep him, in the outside chance that he does start the engine again.
If we owe him 9 and 8, and you have to swallow 6 and 5 to trade him, it becomes a near thing if the $3M difference isn't just to little to move him...unless you get something decent in return, which is unlikely.
Plain and simple, Z whiffed on the Figgins signing.
Downtown Brown shooting 18%?  I think he does that shooting lefthanded while seated on the bench.
moe

Hard to figure Rockies would want to pay a dime for Figgins when they have Chris Nelson and Eric Young, Jr. who are similar in skills. Maybe it is a 3 team trade sending Orton to the 'Hawks?

This morning, Mitch asked Wedge if he considered moving Figgins to leadoff spot.  Wedge said that that would have been an interesting experiment when Ichiro was struggling so bad, but he didn't because Figgins was struggling so bad as well.  Wedge made it clear that had Figgins been hitting, he'd have tried it.  But since Figgins wasn't hitting, he didn't have that option.
From the tone and all, tt was pretty clear to me from the conversation that Wedge would like to unload Figgins if it is at all possible.  When Mitch suggested to Wedge that a change of scenery might be best for Figgins, Wedge seemed very much in agreement.
I didn't get the impression at all that Wedge was among those who believed moving Figgins to the leadoff spot was a good idea.