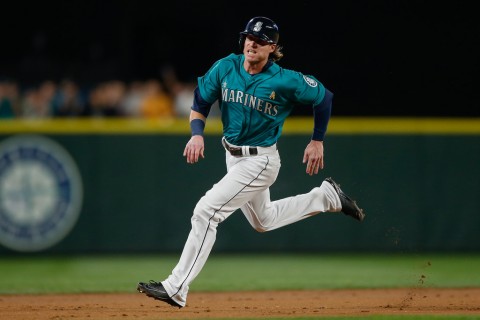 Y'know the 1993-1998 Mariners would have held my attention even if they'd lost 95 games.  Which they didn't, but I'd have bought one ticket every 5th day just for the fireworks on display in that one.

K-Pax' statline sits at 10.7 K, 1.8 BB and 0.0 HR.  Last time out, the A's showed that it's possible to score a few runs off Paxton if he can't hit the broad side of a barn door AND if the hitter lock in on mistake fastballs.  That isn't going to happen often.  We warned yer, after 3 shutouts, that there would be a few bad days.  Now, after the A's game, we warn the Tigers that it isn't likely to be pretty.  ;- )

Jon Paul Morosi, the feeb who swiped Dr. Naka's Ichiro story on SSI for the front page A-1 of his newspaper, does suggest four names in trade at SP:

Marco Estrada - slowballing RHP who outpitches his xFIP's for the same reason Chris Young does.

Miguel Gonzalez - Seems a Gallardo-type stretch, so, definitely give up the farm for him

Kind of looking forward to seeing what we got in Ben Gamel the next couple of weeks.  He's going to need to show a real edge, with his legs and with his CT%, to move himself past the 4th OF label he wears in O.B.  It's not unpossible.

Danny Valencia goes from Left Out to First Base vs LHP on one home run.  That's kind of good news, considering he was our #1 Big Move this offseason.

Tater Motter just missed #6 yesterday -- that might have been a "barrel" that was caught on the warning track -- and he gets a lefty today.  Time was, LHP's were supposed to be the reason he was in the majors.  He's at .250/.311/.625 despite a terrible run of luck on balls in play.

Nelson Cruz' next base hit will put him over .300 and the Tigers are missing Miguel Cabrera and J.D. Martinez.  We doubt they're feeling sorry for us about Maniger, and they're proving you don't really need pitching if your hitters bear down when they're behind by two runs.

We try to get a new comments thread up before the last one hits 50.  So, theoretically, you could force any number of articles per week.  :: heh ::

For sure, the bats are locked in.

The Haniger/Segura swap means the offensive motor basically just keeps humming along. I mean, we lost yesterday when scoring 9 runs. That won't continue, even with Gallardo/Iwakuma/De Jong starting.

And odds are, if that rotation shows weakness and we need to go to Overton... that JeDi doesn't leave the rotation dangling for long. I STILL think he brings a guy in trade at this point before burning Moore's or Povse's non-40 man status so early. But I hope to be wrong... if he thinks those guys are ready (which calling them up will indicate, he's not going to jump early here), then we're in for a real treat.

Once again, the nationally invisible Don Cooper works wonders as a pitching coach.

He is a genius.  Our guy is a dunce.  I repeat my question for JD: what pitcher has improved by working with him?

I streamed Gonzales on my fantasy team earlier this week. Sure he was facing the anemic Royals, but he looked very stable with a bunch of moxie/pitchability.

Since July 1, 2016, Gonzales has 14 QS. Only 9 pitchers have more.(Porcello/Scherzer/Verlander/Kluber/Lester/Duffy/Bumgardner/Sale/Santana)

He'd be an ideal #4 on a Championship Team.

Wait till you see

what Seth Smith just did.