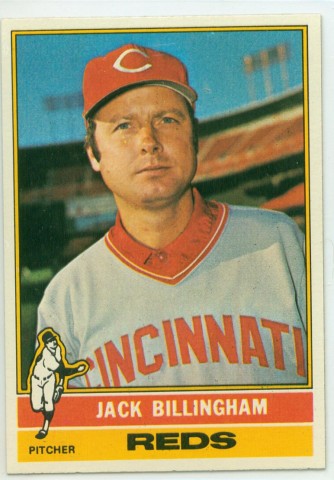 As most Denizens know, Dr. D's boyhood team had an impossible collection of 8 regulars who were, each of them, lordly on offense as well as defense.  The Reds would always have a good pitcher or two - Gary Nolan or Don Gullett or somebody, and those guys would go 15-3 in front of the Big Red Machine.  (Hmmmmmm speaking of James Paxton ...)

But on Jack Billingham Day it would become a desperate contest between JB's "atom balls," with Dave Concepcion diving left and right every inning, and Johnny Bench's attempts to reach the fences two or three times and overcome the natural deficit posted by the starting pitcher.

Often it worked for Billingham.  Note carefully the line of 15-10 records alongside 88 ERA+'s on his baseball card.  Sparky Anderson wasn't the original Captain Hook for nothin'.

At last count the "Give him a chance why don'cha" crew had +5:  Malcontent, Zoom, Dipoto, Electrokraken, and one other guyy I TOLD you already I don't remember nothin'.

The "SSI Worst Wager:  ignorance is the root of bliss" crowd had +6, of which I remember Dr. D, Taro, Wish, Seattle Sports and there were two other guys.

We done tolja we weren't going to gloat about this.  From Dr. D's point of view the best (reasonable) case scenario -- in, say, five Gallardo starts -- is about a 3-2 record full of Dyson rundowns, 11-8 scores, and a DL swapout for Dillon Everton.  But who knows; Jerry Dipoto may know a lot about baseball.  We've heard rumors.  So have enemy batters trying to survive the ninth inning.

Sosh will pat RHP Jesse Chavez on his diminutive right shoulder and point moundward at about 7 pm.  While watching his iPad with a hawk eye regarding the MRI on Garrett Richards.  Chavez has thrown 1000's of excellent pitches in the major leagues, primarily 93 MPH fastballs and Brad Radke-ish changeups.  Unfortunately for him, he has thrown dozens of lousy pitches in the major leagues and has gopheritis.  His labs came back at 1.3 homers per nanoliter.

About time for Boomstick to shake off that really bad head cold so we can get back to Paxton.  Oh, wait, two games more yet.

The last coupla games, the Denizens have been using that day's pre-game article Shout Box to chat the game.  In essence, we have the same Shout Box we did before, good for 24 hour wedges of conversation at a swat.

Each day, howzabout we consider Shouting underneath the most recent Dr. D article for general conversation.  It would then naturally morph into an in-game thread.  Detecto will forward, encourage, and otherwise facilitate this trend if Denizens are so inclined.  Today, that would be THIS article's Shout Box.

So, remarks most directly related to HWMNBN might logically go into the CMS comments here, and remarks related to the M's in general into this Shout Box.

I think that for today...

...I'll ignore my Worst Bet prediction and just hope to be wrong. =) Maybe Gallardo is one of those guys who gets up for a real game, maybe he's comfortable on this team, maybe it's suddenly 2007. Let's go M's!

...MAN it's nice to have the first win monkey off our backs! That was a great felling last night.

I hope to be wrong

About Gallardo.  Maybe he's different in season than he was in spring.

I guess you should be happy that I'm not the M's GM. If it were me, I'd give the nod to Overton over Gallardo.

Brooks has Dillon's velocity starting this year at a tick above where he was at at the end of last year, bumping him from interesting to intruiguing. It's probably notable that his average FB speed steadily increased over the course of 2016 but still never cracked 90.5 BUT he's starting this year averaging 91. Give JeDi the nod here, he ID'd Dillon, obtained him, and put him in a position to take over if he pans out like JeDi thinks he will and Gallardo fails.

I said the same

a week before the season started.   I think many are on board with the idea, Doc has said the same as recently as yesterday.

Still will believe it when I see it :- )

Not so easy to sink a cost of $10M after one month's trial.  You do have to sit down in the boardroom and gaze at the financials.  But if that actually occurs I'll write an ode to the M's nerves of steel...

Heredia gets the start for Martin tonight.

Yep! Felix has a mismatch today...

And if WBC-san comes through, here's K-Pax already for the .500 record.  Officer thinking, Wish!

to no (apparent) avail.  I submit the comment, it clears the input box, but the comment never appears on my end.  Living in the Philippines, so maybe there's an auto spam filter at work?

Hmmmmmmm ... we'll get this reported Jonezie