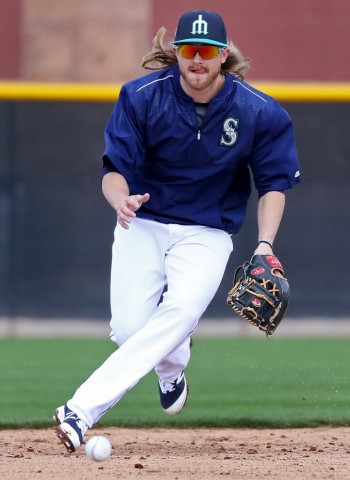 Not that any Denizens had bailed, that we'd noticed.  :- )  But here's an Attaboy for 'im even during his little HR drought.

We knew he wouldn't slug .600 for the next five years.  And the enemy pitchers did figure out they better not stick their fingers in the doggie's mouth, namely challenging him in any way during a hitter's count.  So Motter has to adjust back, take a few balls the other way.  (Don't assume that nobody will ever make another mistake to Motter.  He'll get runners on 1B and 2B, the pitchers will fall behind trying to get him to chase, and they'll lay some in there for him.)

But I'm still pretty bullish on Motter.  He's got real-deal skills, including

In roto terms, he's got Zobrist-like persistence on your roster, if you're going LIMA plan.  He's going to get his AB's over the course of a year and he's going to do something with them.

He's not Barry Larkin but I believe you can make a living his way, finding the pitches that he can handle and tipping his cap if the pitcher beats him that night.  Quite aside from the viability of this approach, Dr. D muchly enjoys watching Taylor Motter's consistent focus in the batter's box.  It's brainy and it's character-intensive.

Shawn O'Malley, bless his heart, has a tough road back in Seattle.  Motter could be here for quite a while.

Hey, for that matter the whole 2017 ball club can flat out rake.  They got to maintain contact until they get their rotation back.

Still love Thor. Taylor Motter can take over 2nd when Cano has to move to 1B. Vogelbach better get to hitting or he might miss his shot. What does he do better than Motter really?

I am still behind him

And though I got a Haniger jersey, my daughters pick was Motter.  Reminds me, I saw a dark blue Haniger jersey in the stands at both of those games in Philly...

I think there can be room for O'Malley and Motter together.  Could be one of them has to be as the 4th OF to make that work, but not necessarily.  We don't have a 1b platoon right now.

You know how much I love that roster set up.  Motter makes it a bit more special because those Ute types don't usually hurt the ball like he does. He is a real terrific get. I love what he brings.

O'Mally switch hits, advantage him.  Both play the OF well enough to survive.

I'm also very interested in the dirt dog winner quality of Tyler Smith.  He's a RHB, disadvantage him, but everytime I watch him he does something to catch my attention.

We could have them both if only...