Skip to main content
POTD
So, Jesus Montero IS Crushing It
Psych up with Dr. D's blessing 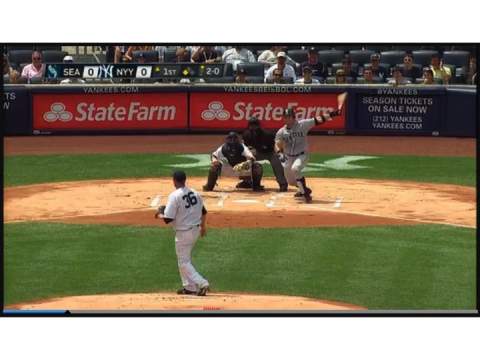 Q.  How big a deal, that the guy just won Biggest Loser and the lifetime free veggie sub card?

A.  Not.  Most those Biggest Loser amigos wind up Biggest Winners shortly after the lights flick off.  Like maybe 20% of them have actually changed.

On Jan. 31, Dr. D expressed his skepticism of the Fat Farm Trip, as such:

Zduriencik can't get Jesus Montero to have a vision, the will to win.  And McClendon can't, and the personal trainer can't, and of course you and I can't.

Alcoholics Anonymous counselors will tell you that the turnaround comes after a person hits bottom.  See Hamilton, Josh.  Then a man gets "motivated" short term, and in Hulse's world, that short-term motivation starts the engine on daily habits and routines.  The vision arrives, and it's locked in, because the alternate world (of defeat and failure) arrives.  The man starts taking failure seriously.

Did Montero have an "Aha!" moment, the point at which he really gained a fear of failure?  Or has he just been babysat?

No idea.  But if he ever has his Josh Hamilton moment, he's liable to become Mike Piazza.

The fact that Montero was babysat into a weight loss ... that and four bucks gets you a cup of coffee, room service.

Q.  So what's with the headline, then?

A.  You know how NASA-Skynet scrubs the 'net, digging out keywords ... Dr. Dilaudid walked into the lab to hear 5-star clanging alarm bells going off at many of the things Montero said in this article.

“I turned the page. I turned everything (over) to the Mariners. I put all of my love, all of my sweat — every second, every minute, every hour — into spending time here with the organization, just working to get better every single day.”

This "every second, every minute" shtick is not the language of a man who showed up to the gym, clocking in and clocking out, chatting with the ladies in between sets (like 80% of the guys at Pacific Fitness will do).  It's the language of a man who got immersive with the work.  It's what you hear from a guy who grabs the barbell with bad intentions.

It's not just the one quote.  The noises add up.  It's becoming clear here what happened.

A.  You transform yourself with P90X or insanity, or you throw yourself into a football preseason the right way, or maybe even just make the attempt to be aggressive about your hospital convalescence, or whatever it is before yer ..., the physical benefits are great.  But they don't weight one dime against the dollar's worth of --- > self-confidence.

There is just nothing like (1) attacking a workout plan and (2) destroying it.  It changes you as a man.  (Any number of you amigos will be able to tell your own stories here.)  Zduriencik said, same B-H article,

“He is more confident in himself,” general manager Jack Zduriencik said. “He realizes he has accomplished something this offseason that he never did in his career. I do know he feels really good about himself.

“His wife is so proud of the work he did. He’s dedicated himself like we’ve never seen him do it before. Now he has to compete.”

Q.  You're saying a coupla quotes here, and we're pulling the train into Mike Piazza City?

A.  The thing is, as of Jan. 31, Dr. Dilaudid didn't buy in.  As of Feb. 21, he does buy in.  Montero did more than hook up with a good babysitter; he threw himself into the war, and, apparently he became a warrior.  Sure - there are some things that means, some things it doesn't mean.

... this shtick about Montero's rebirth is all news to us.  It ain't to the M's.  They knew that Montero's winter was the real deal, as bleeds through their public vibe.

Q.  So now he can reach the slider?

A.  Plate coverage wasn't his issue for me; the issue is that his swing became static, without snap and accel, without explosiveness.  If the catcher can catch it, Jesus Montero can hit it.  What he needed back was that ability to take it out of the catcher's glove with authority.

Prince Fielder swings the bat the same way at 260 or 290.  But not Jesus Montero.  Lighter, he sinks his weight better, he extends the followthrough better, he moves his weight to the incoming energy ... some hitters benefit from being light on their feet in the box.  Frank Thomas was that way.

Q.  Is Montero in control of his own den-sity here?

A.  Not in March.  You'd be surprised how much attrition winds up determining the May-June playing time.  The roles are almost more something that wind up happening to the Mariners.

Zduriencik has brought in a rawhide-tough, attack-dog MLB(TM) righty to compete head-up with Montero.  Probably Weeks controls his destiny.

Cream rises, though, babe.  If you're doin' the roto thing you will definitely want to stash Jesus Montero.  Impact sleeper.  Big time.