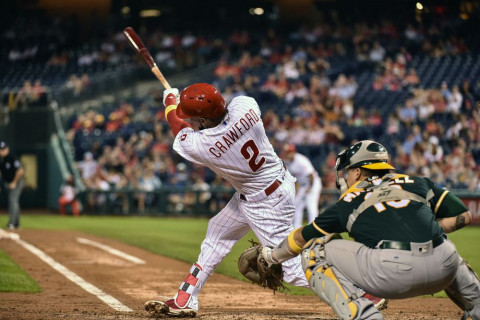 A WORD TO THE PROSPECT-LIST UNWISE

A word to the wise ain't necessary; it's the ignoramus at SSI who needs your advice.  As you know, there are two things Dr. D couldn't care less about:

So you can just imagine how mighty Dr. D's erudition on J.P. Crawford was, before Crawford became a Mariner.

He got a couple of tastes in MLB at ages 22 and 23 and OPS+ed 85 in a few AB's, whereupon Philly fans boo'ed him off the field, metaphorically.  Take for example this MLBTR thread, which is either the funniest or saddest you'll see.  The commenters are no more eligible for "words to the wise" than I am.  In the words of one wag:

Personally, I see a very athletic, toolsy player that has yet to successfully make any adjustments to his swing, bat path, and mental approach at the advanced levels of MiLB. I see a capable, average defender, who’s athleticism allows him to handle multiple positions; however, Crawford really does not grade out as a plus defender anywhere.

To me, a top prospect is a player that should immediately help and positively impact their ML team, upon their arrival at the ML level. Over the past three seasons, there was never a time I once felt that way about JP Crawford.

In other words, they're spitting mad that Crawford didn't give them a Corey Seager-style MVP candidate right off the bat.  Crawford didn't hit three homers in his first week and slowly get hot from there.

You might not be any more interested in the NL than I am, but you know all about age-arcs and what it means when a prospect makes the bigs at 22, 23 or 24.

Why was Crawford such a whale on the draft lists?  Baseball Prospectus said, for example, in late 2017:

Scouting Report: All the party pieces are present for an on-base machine that plays above-average defense at the six-hole, and that’s still a star even in the days of everyone uppercutting a potentially juiced baseball. Crawford has a silky, fast swing from the left side that still projects as average-to-plus at the major-league level notwithstanding some mediocre batting averages in the high-minors. He pairs that with some of the best plate selectivity in the minors, and the combination could coalesce to post some shiny OBPs during his peak. Defensively, he’s a no-doubt shortstop with smooth, strong actions and more than enough arm for the position; he shouldn’t have any issues at second or third if the Phillies so desire, either.

The two remaining tools here aren’t nothing, either.

On the minus side, at age 23 in the bigs he had only a 90 OPS+ in 117 at-bats.  He did not "immediately help and positively impact the Phillies" when he arrived.  I think I can put two and two together, can't you?

Get what?  Why Dipoto would chuck Jean Segura out the car window at 75 MPH and grab a Corey Seager type who should be ready in 2020 or 2021.  (Split that trade out:  Nicasio and Pazos for an aging 33-year old star, and Segura-Crawford.)  You might disagree.  Dipoto's own opinion is clear.  He thinks Crawford is a top-10 prospect.

As expected, Crawford will start the season in Tacoma. Service time no doubt plays into this decision, but coming off a rough first full season in the big leagues with the Phillies, the Mariners want him to be ready and clicking on all cylinders the next time he plays in the big leagues. That’s a philosophy the Mariners hold with many of the younger prospects in the organization. “I think he made some good strides defensively, there are still some things in his game offensively,” Servais said of Crawford. “I know he didn’t swing the bat maybe as he is capable of. We will get him going at Triple-A and when he gets going good he will be back with us.”

Philly baked the cake; now we're going to eat it.  Crawford has mastered AAA and had two MLB cups of coffee, with winters to digest them.  To call him ML-ready would be an understatement; leaving him in AAA for any longer than this would be...

Well, it would be handcuffing him to the piano for 2024, is what it would be.

Oh by the way it's this, and the fact that they cut Sheffield and Swanson, that lets you know Jerry's not exactly kidding when he says they're targeting 2020-21.  The pitchers will only need to stay down a couple weeks, right?  But stay down they will; 2019 is not the very top priority.

Well, that does it for us.  We've got our thoughts organized on the J.P. Crawford trade.  An ML-ready blue chip shortstop who boasts a high-OBP left hand bat, in return for a minor star who's making $15M per year.

So what's to see here?  Looks like a cliche'd Billy Beane moneyball trade to me.