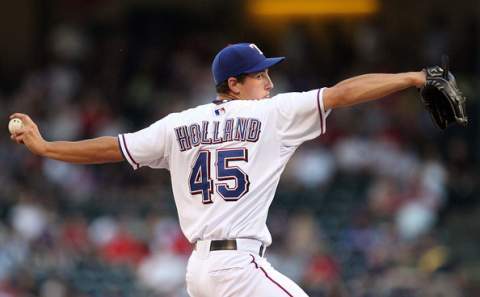 If you'd like to call his offish for an appointment.  :: eyes as anime spirals ::

Where there was a "Condor" Saunders, there is now a "Jay" Happ.  There will be many "Miss" Happs before the Condor investment is written off.  So, M's fans' fates are sealed.  They will be rooting for a 2015 Derek Holland wannabe, and that's that.

First scans of the 2014 Happ require no CT machines - just the stethoscope.  Happ in the second half of 2014 went from "quick" to "alarming" and his fastball percentage went to 70%.  He got good, as any 68:19 control ratio could tell you.

You probably don't care all that much about +3 MPH in velocity.  This proves that you are not a pitcher, sir.

Pitchers sit on the bench in the bullpen.  They roll up their sleeves to "take some rays."  They gaze off into the distance.  They dream about +3 MPH.  It never happens.

Except this time it did.

IT AIN'T ROCKET SCIENCE.  The guy humped up!  Throw a fastball with insufficient velocity and someone will smack it out of the park with a stick.  Throw it 94 MPH, lefthanded, and you're going to run off a 400-batter streak without getting yanked from a game (yes, really).

Jeff Sullivan, under quota his ownself, wheeled in the CT machine on Feb. 16 and grok'ked that "Jay" Happ's pitches actually look just about exactly like the pitches of ... um ... Cole Hamels.  Jeffy, in view of who his audience is, types a blizzard of asterisks before you can say "Roger Salkeld."

Jeffy has his explanations for why Happ isn't Hamels; Dr. Dilaudid has his.  The only real difference between the two, any more, is that Cole Hamels knows how to keep his fingers out of the doggie's mouth.  For example, Jeffy's charts here:

And the charts above don't reflect that Hamels takes more of the plate WHEN the batter doesn't swing.  It's a pitchability thing.  The one time all day you guess curve ball, GET curve ball ... it's on your back foot and you swing over it.  The above charts are only suggestive.

Happ isn't going to be Cole Hamels.  No way no how.  That's not "No Cheering In The Press Box" more-objective-than-thou shtick; it's the fact of the case.  Jay Happ is no more Cole Hamels than Nelson Cruz is Mike Trout.

Hamels is an artist, and that virtuosity is part of the reason that you can bet $25M per year on him, on a Jon Lester, on a Cliff Lee.  Whatever Lester's arm, whatever Hamels' arm, the ROM hardwires in their brains come with the athletes when you pay them.  You can pay Lester $25M, and even if he loses some stuff, he's got the vision and the feel.  Russell Wilson isn't better than Colin Kaepernick because he throws harder, princess.  (He's better, obviously, because he can't be baited by Twitter geeks with 8 followers.)

And, naturally, that wasn't Sully's idea, that Happ is about to comp out for Cole Hamels.  It was an interesting PITCH comp return, and he reported it.  He reports, we mosh, you wallow in sunny dreams of pennants won by 20.  Life goes on :- )

Happ doesn't need to be Cole Hamels.  He'd like to be Derek Holland.

Work the heater, keep hitters honest with a couple of offspeed pitches that are, on the surface, Hamels-quality.  Things in Happ's favor:

When Zduriencik swooped on Happ, we heard a lot of weeping and wailing about how other teams didn't know Happ was out there.  Dr. D wants to see the 94 MPH, and he wants to see the 70% heaters, and if he does then yeah.  Happ will win 15 games.

Or you know.  Whatever stat you want to insert for "win 15 games."

Derek Holland in Safeco?!  Time to swap out the drip,