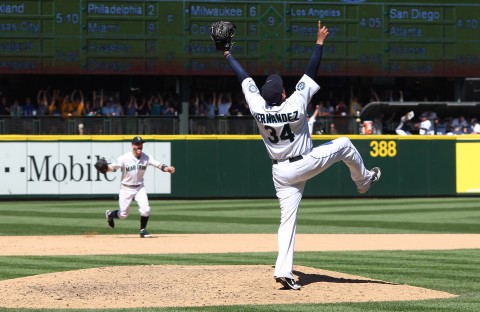 Q.  Would you take a shaky 5 IP, 3 ER from your #5 starter if you could have the same thing every time?

A.  This comes from backgammon and skittles chess, where two pro's will barter the "settlement" of a game in a particular position.  Let's say White is sitting with a 60% chance of winning, and the two players have bet $10 on the game.  Black offers $5.50 cash to quit the game on the spot.  Should White accept?

Of course, the theoretical answer is no; his game is "worth" $6 at the moment.

Alternatively you could use a chess principle to analyze the degree to which Felix is hurting the ball club.  "If you had 1,000 positions like this, would you make the same move every time" or did you just make a move that is a gamble, and will be refuted a lot of the time.  If Dipoto had the 2018 season to play 1,000 times, would he stick with Felix in the 5 spot all 1,000 seasons?

I feel that if I'm playing the Rockies in the tabletop game, that's a very fair offer because:

A.  I would take the 5 IP, 3 ER for Felix, because it doesn't "penalize" the Mariners for the ugly FEELING they have, giving up tons of traffic and runs in the first two innings.  Felix is a cat hanging from a screen door by its claws, from the first pitch of every game.  And the cat has pretty short nubs it's using.

Is 5 IP, 3 ER okay from your #5 starter ... you need 4+ runs offensively, and you have whatever your 6th and 7th inning pitchers are going to give up, before you get to your twin closers.  Last night was a ghastly example of what can happen to those mid-inning pitchers.... we're not talking about whether the average team in baseball wants 5 IP, 3 ER.  We're talking about whether THIS PARTICULAR TEAM, the 2018 Mariners, is fine with a SHAKY three runs in a short start.

On the other hand, after we're all done swapping PRO's and CON's here, the Mariners ARE IN FACT 10-9 in Felix' starts.  That's what this particular team has scraped from Felix' leavings.  Not bad from your #5 starter, a solid .500 record!

Q. Would YOU swap him out.

If I can swap him out, I swap him out in a New York second.  This shtick where the other team gets two-three-four baserunners every inning to start the game?  It's not worthy of a championship team.

I have an excellent team, winning 95 games, I want better than that from ALL my starters.  If I can get them.

And isn't it funny how MLB.com, supposedly a journalist site ;- ) and therefore its neutrality a given ;- ) sums up the SP trade targets as "The Yankees Should Target One of These Pitchers."

On the TV show last night, Dipoto spoke of a 6-man rotation as something the M's might well use, as a way to soften Marc-O's year specifically.