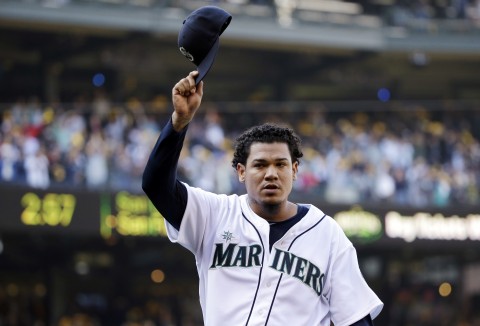 It seems that Felix is getting the hang of his new incarnation.

To aiki-Doc, his body language and his pitching motion is much happier.  For instance, he looked like he was standing with his feet a bit wider apart taking the sign - meaning that he was "chambering" his CG to tetherball around his right leg in a "fun, loose" motion.  The acceleration of his CG around the tetherball pole - the point of momentum as he swung around and launched forward - had a swing feel rather than a muscular feel.

When he came off the mound in the 8th -- during the inning! -- he gave a happy little hop and fist pump.  This is the sign of a man who is thinking, "I got this now!"

From an arsenal standpoint, Felix was throwing a CUT fastball to stay inside on lefties and not run back over the plate for the 440-foot rocket launch.  He hit his spots with authority and the yellow hammer?  He threw 19 of them and the strike count was -- wait for it -- 16.  !

He did not throw many changeups and they were not the old Cheat Code changeups.  Felix has only ever had one Cheat Code breaking pitch at a time.  Personally am glad it is now the curve; it separates the velocities and creates a deeper front-to-back strike zone.

He only had 3 strikeouts but the groundballs came in bunches and only a very few times did a Ranger pull the ball in the air.  Felix' stock is up, WAYYYY up, from January.  As you know he sits at 15:0 for his CTL, over 18.1 innings.  Better for me was the fact that he gave up 0 homers and deserved to give up 0 homers.

This velocity trend chart is a little weird.  Welcome comments, amigos.  Could be the many cutters, which they say are tough to throw at full velocity.  Felix of course wasn't worried.

Anyway:  you THOUGHT Felix would get it figured out, and that he retained plenty of weapons, but you didn't think he'd start this solidly this fast.  First two games, he was a TOR loosely speaking, and yesterday he was a Stopper.  Next stopper up tonight.

Yesterday "JeDi" confessed that the M's were embarrassed and then, as Corran noted, winked to the crowd about JeDi mind tricks in trade.  Yesterday night, Zip made him look real good again.  Servais brought him in for the $6M role, to bridge from Felix to Sugar, and Zip made two difficult LHB at-bats look

Which they are supposed to be.  And which they in fact were.

It's interesting that Zip has 0 K, 0 BB and 0 HR in three innings pitched - which gives him an xFIP of 2.93.  So if you hit every single ball into fair play, say 35 batted balls a game hit at average fielders, you would get a little less than 3 runs a game?

(2) Lemme go check Billy Wagner, another tiny flamethrower, just for fun ... For his career, Wagner had absolutely no preference about pitching with 1 day's rest or none.  We also suspect that a wide-ranging study would show little effect from rest for closers similar to Diaz.  Mariano Rivera wasn't big, that's for sure.

Commentary on Zeus' dominance Saturday is best placed into the Shout Box below THIS post.  :- )

I really liked your CG comments and the "happy" nature of his motion.  I told my daughter, Blair, lst night, that it looked like he had an easier and deeper "Tiant Turn," as we watched the game.

Diaz looked nuclear. The single he gave up was on a slurve, after after zinging heaters that nobody could quite get to.  I thought it was a bad pitch call, either his or Zunino's.

The cutter is new

He wanted to start throwing it a couple years ago. Carl Willis talked him out of it, saying, Maybe later. We don't need it right now.

So, later has arrived. I think we talked about this is a spring training thread, his ability to add pitches as desired. There aren't many pitchers who can do this so seamlessly.

I actually called Dan Brooks about that. We agreed they had misclassified the pitches.

1-4 has never been my worry.  But then hitting 3-5 wasn't either and we saw how that first week went.  Still not really worried, I guess.

I'm sill certain that Felix could dominate at 88 and under.  Whether he ever will might take some years to find out.  Last night gave several reasons to think he could though.  He practically reinvents himself every year.  Pitch frequency changes for him frequently.  It's all about what seems to be working now.  Interesting that this year he's using the Sinker less than the 4-seam to the point that usages are basically switched.  He's used the 4-seam more in a few games in his career but if the 2 start trend continues it would be the first year.  He's using the change less than recent years but not less than 2010 and before.  Stating what his ideal usages would be seems impossible because several iterations have worked, I think based on what he had with each pitch that day or year.  Yeah, this year that curve is gorgeous.

I remember as a college student trying to convince my parents to take me to see Felix's first-ever home game. (They did, by the way: sprung for seats in the field level quarter-circle around home plate, too - a memory of a night out with my dad I'll NEVER forget). Knew the guy was going to be something special even then... boy did that prediction ever come out right!

I've been fairly confident The King would adjust. But it does me a world of good to see the ascendancy of the Curve, to see the MPHs stay just a bit higher than I feared they might drop, to see the intermixing of sequences fit where the ability lies. But it's that CONFIDENCE radiating out from him, that sense that Paxton's day may come - or even be here! - but that the King is still on his throne. That's what gets me a little giddy.