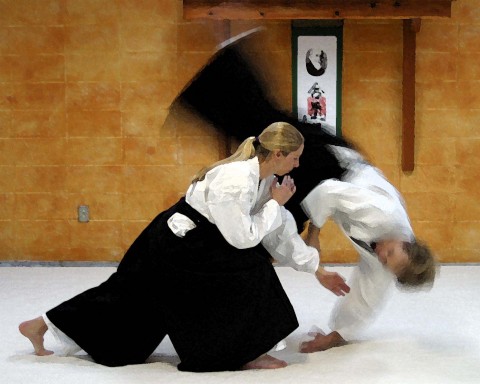 As y'know, we live to serve.

Aiki-Doc thinks that there are times when we simply must go outside the beaten path to understand an unusual situation.  The beaten path helps us recognize and step around / through the 80%, 90% most common situations we run into.  The beaten path is a sine qua non, whether in chess or in baseball or in anything else.  You ain't going to assess a chess position properly if you can't point at an average position and say "This is a Maroczy Bind minus the light square Bishops."  80% or 90% isn't everything, but it's more important than the 10%.  That 80%, 90% takes you up the chess ladder into near-mastery.

But chess masters beat amateurs precisely because they know when they're in a 10% situation, while the club player is trying to apply the 90% cliches.  The amateur knows the rules; the master knows the rules, and knows their exceptions.  Those exceptions are my favorite way of beating club players. 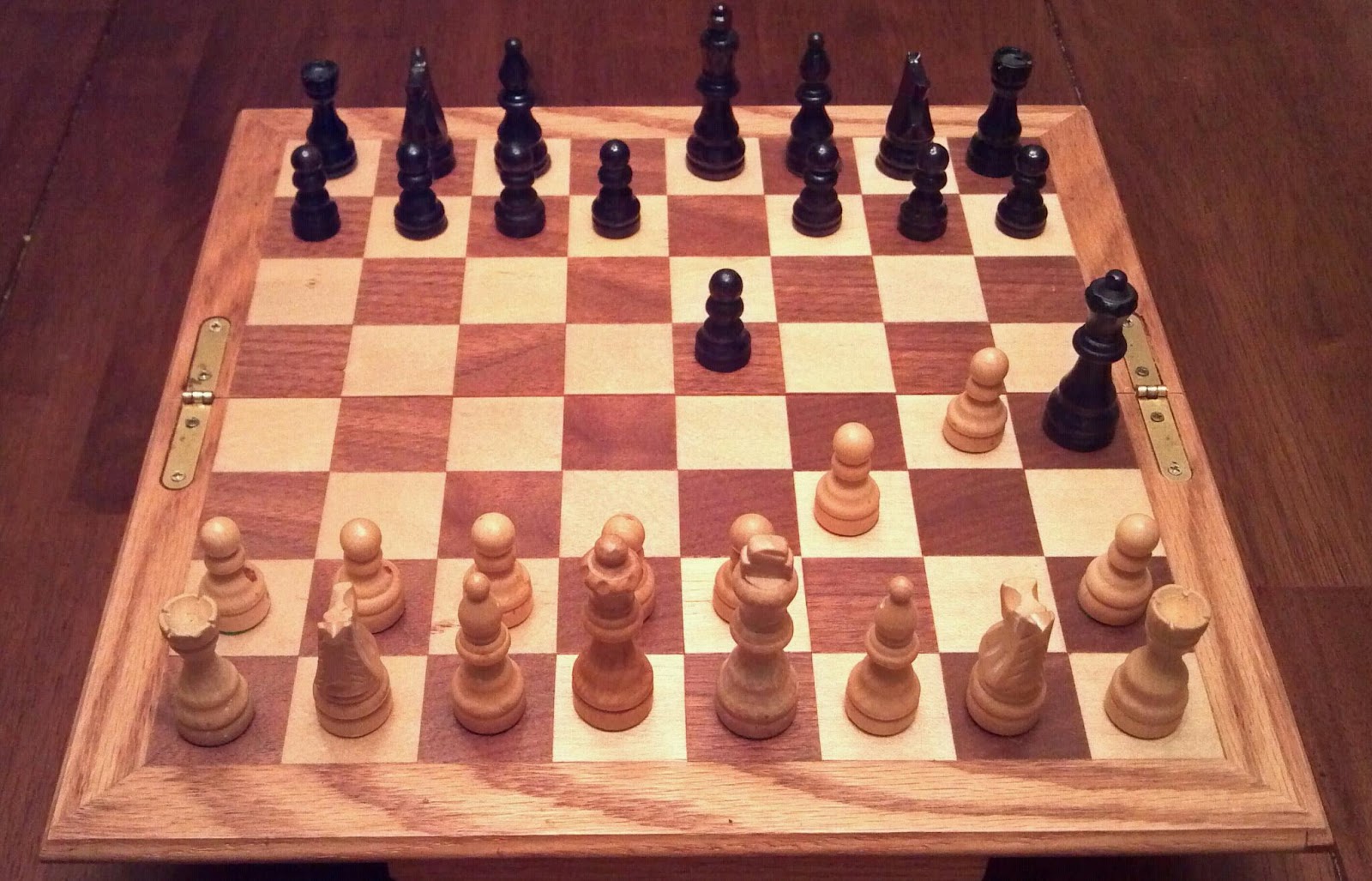 Don't move your Queen out early!

The above position is a joke, of course.  But I bet some of youse didn't know you can win in 2 moves...

Mike Zunino is a weird ballplayer.  If you try to use his numbers to date to project him forward, you'll be immersing yourself in gasoline and lighting a match.  I mean that in a good way.

In early aikido, O'Sensei had a couple of students who could literally deflect arrows at a distance of 25 yards.  (Nowadays there is a samurai who can use his katana, from a sheathed position!  to bisect ping-pong balls, air-fired at a much faster pace than a 100 MPH fastball.  He uses Nori Aoki's front triceps mechanics.  But the arrow would have been just as tough.)

Take yourself a camera, and try to dissect the mechanics? involved with these supernatural feats.  You will learn very little.  You don't get belts in aikido for improving your mechanics; the blue belts have great mechanics.  You get them for applying the golden rules in the middle of chaos.  The mechanics themsleves "are not difficult and can be learned in a few days" - Koichi Tohei, aiki shihan.

What IS difficult is applying the 4 golden principles of aikido in the middle of a bloody fistfight.

The first principle, worth as much as the other 3 principles by itself, is to RELAX.  This sounds simple, but it isn't.  We could (and others have) go on for 1000's of pages on the concept of relaxing while in mortal danger.

Mike Blowers pointed out that Zunino's front foot is falling like a maple leaf in October.  As a result, his entire front side is --- > not going anywhere as the pitch approaches.  His left deltoid and left tricep are falling softly into the hitting zone also.

Relaxation gives you "soft vision" and slows time down.  Can YOU relax when a drunk's face goes grotesque and he winds up to throw a punch that will put you in the hospital?  of course you can't.  Only the masters can.

What comes first, the chicken or the egg?  :- )  Is Zunino relaxing because he's confident, and is he confident because he learned to organize his thoughts around the low-away pitch?  Or did his relaxation remove the "greed for success" that had him lunging for sliders?  Or do both insights blend softly casual into the other?

You never teach a student One Great Thing and have him go "Oh!  That's how you checkmate Bobby Fischer!"  You teach him the great thing along with several practical tools, and they jell.  Dr. D has never played baseball, and it doesn't look simple to do.

For the reader, Dr. D would recommend watching Zunino with emphasis on his "lack of greed" and his relaxation.

BEST AB OF THE YEAR

Zuumball's 3-run homer on Monday started from a 1-1 count ... and then the umpire, MADDENINGLY, blew a bad call to put Zunino in a 1-2 hole.  Forget mechanics.

How would you FEEL, if that were you?  Picture the three decks of fans, and all that.  Picture the 1-1 count.  Picture the ball missing to put you 2-1.  Then picture the ump's bellow, and the pitcher smirking, and winding up for 1-2.

How Mike Zunino felt, was relaxed.  And ready to deal with the incoming energy.  (Scott Servais talks often, if you listen to him, marvelling "all the panic is gone out of Mike's game.  Especially with two strikes."  What is the sabermetric definition of "panic"?

He worked the count to 3-2, and then let the 3-2 pitch travel very deep, and then he "FIRED" that bat (as Blowers would say) and he gave us the ballgame.

I dunno how to project Mike Zunino from here.  I do know that whatever his 90th, 95th percentile was on draft day, he's got a great chance to fulfill it Now.  You literally coudn't ask for more in his solid plate coverage, or his quickfire path to the ball, or his natural talent.  If he were re-drafted from right now he'd be a 1-1 for sure, which you could say about any Golden Boy who was looking great in the majors.

Common sense tells us to just enjoy the ride and see where he goes from here.  AL All-Star catcher is a very real possibility.  This is a glove-first player.

Could not agree more on the premise here

Of course, not everyone has supreme talent.  And not everyone with talent succeeds.  I'd say the process often works like this:

1) you're told to 'trust your talent'

4) as a result, you're talent is suffocated

Here's the rundown of the top ten in Zunino's drafrt:

2) Buxton: Twins fans wondering whether this will ever work out

6) Almora: buried in the Cubs system

8) Appel: the gamble that hasn't worked out

Ya' pays your money and ya' takes your chances.

Can't decide whether to add on, or promote it ...

Understand where you're coming from...but...

Hey Doc, I agree with the general premise of this article - that what comes first isn't the statistical change, but the mental one.  But I think when a player has leaped a plateau in the way he processes the game mentally, you can see all of the hallmarks of that in the data that follows, and it doesn't take a huge sample to do so.  I shared a lot of that information in the shout box (which seems to not be accepting comments right now, just fyi) which would lead to the same conclusions you have drawn.  He is unhurried up there now, has a soft front side...and it's letting him lay off outside/sucker pitches and target one specific zone in which he wants to hit...the result is more fly balls, higher exit velocities, fewer strikeouts, lower O-Sw%, high Z-CT%...

So not sure I agree with the line: "If you try to analyze Zunino by the numbers you'll be dousing yourself in lighter fluid and lighting a match". :)

Ya, that's a broad statement to make a point

Nothing at all wrong with using the results to make inferences.  That's what we do here.

In this specific case, my own take on it is the aiki perspective, which readers can accept or reject as they please.  :- )

Can you pass along to admins, Doc?  I could shout just fine from my work computer earlier (did so just to test it) but cannot shout from this machine using any browser.

Yep, the admins hear you, both in the 'Box and in the comments

They'll be commenting on maintenance issues as needed, as opposed to me speaking about things whereof I know nothing :- ) so keep advising them of status quos and they'll keep working it, with perhaps occasional updates on their part when it's value-added.