Skip to main content
Postgame
M's 8, Red Sox 4
we had 'em all the way 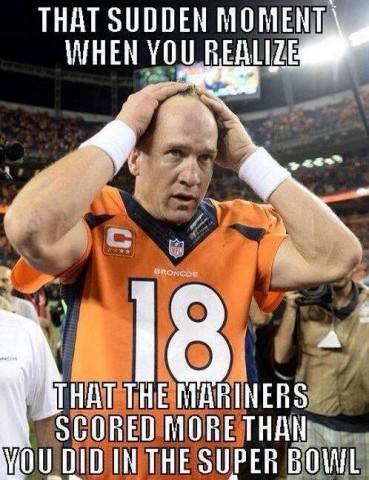 Quotable:  "His pitches were over the plate. When (they) leave pitches over the plate, you can do whatever you want with those pitches. That’s what happened."

Dr. D always laughs when he hears an announcer say this:  "Kobe can score whenever he wants."  If I were Kobe that would mean 142 points per game, average.  What could possibly happen to cause you to not want to score?

Guti, however, found pitches he could do whatever he wanted with, and what he wanted to do was hit homers to left, center and right.  Well, the one to right bounced off the wall, so we'll put Gutierrez' hyperbole down to poetic license.

Quotable:   "When he can mash the left-handed pitchers like that," manager Scott Servais said, "we’re really a different lineup. He’s got big power."

Yeah, no kidding.  Every time you add another 160 OPS+ bat your lineup is going to look different.  Here's to trading Aoki and ? for Jose Bautista and REALLY having a different lineup.
.

Quotable:  "We really needed that," per Servais.  "That" being WBC-san's fifth straight game with 7.0 IP.

Run through 'Kuma's game logs and you'll find 7 IP 3 ER every single game, plus or minus 1 inning and 1 run.  Bill James once said, 80% of a player's value is in being major-league average.  You have to GM a team and watch Jeff Weaver a few times to realize what James meant by that ...

Quotable:  “I feel like my mechanics are much better now,” he said through interpreter Antony Suzuki. “I feel like my balance between my upper body and lower body are better. More than that, I’m attacking the strike zone and getting strike one, which helps me a lot, and not try to nibble on both sides of the plate. Just attacking has gotten me better.”

So much of pitching is about balance, grace and balance and body control.  Which is not something that can be easily grokked from the CF camera.  Accordingly, SSI is glad to have Iwakuma's own point of view as to what Iwakuma's body is doing.  Looks like he's ready to go on a run.

Brooksbaseball.net had Iwakuma's splitter diving as much as -5 inches below vacuum:

Had 22 strikeouts and NO walks in Tacoma.  That's why he got the call.

He had a novel approach to his attack:  a 92 fastball right down the middle -- but either knee high or shoulder high.  He said, Well, I'm not going to worry about the corners.  I'm pounding the knees and I'm changing the eye level.  As a result, there's a wide band of pitch spots at the knees and thighs, and another one up high, and absolutely nothing stomach high.

On my way to our seats- watched... first-pitch single... second pitch strike... third pitch dead center, 380' from home plate. Next time up- out to left. Next time up- long to right- 3 RBIs. [Robbie Cano also knocked in a couple, "in garbage time".] And, David Rollins  was effective, if (as the good Doc says) not a recipe for getting- well, traded for Jose Bautista! (say)

A bit sad to see old friend Roenis Elias get banged around like that. But- now that he's one of "the other guys"- my sympathy has its limits.

Other observations: What confidence Leonys Martin inspires, roaming around in CF, tracking down everything that gets over the infield. (Reminds me of another CF the Mariners had... was it 2010? ...2001? ...1995? Anyway- he looks really good out there!)

Dae Ho Lee does not "get air". Dae Ho Lee gets his heels off the ground- that's about it. Two balls, just over his outstretched mitt. If he can't get some springs, he should be allowed to use a fishing net out there!

Iwakuma-san doesn't overpower anyone, but.. he     (o; keeps throwing strikes, and getting outs. Kinda like Jamie Moyer-san, for those who remember our last successful "soft-tosser".

This whole replay thing is a recipe to sell beer- and for pulled muscles out there. Doesn't matter if you get every call exactly right- just make a call, and get on with the game! Why talk on the one hand about "speeding the game up", and on the other hand spend five minutes (OK, 3 mins 47 secs) under a hood debating the call with the "suits" in New Jersey?!