Skip to main content
Postgame
M's 7, stRangers 5
Texas nearly runs down the M's, but this time the hero escapes 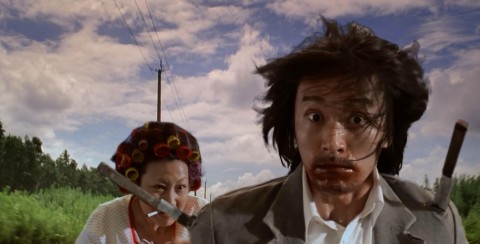 Earl was asked what a HOF manager is looking at when the game starts.  His reply, first thing is he wants a guage on how the starters are throwing that night.  Derek Holland looked "meh" from here, while Iwakuma looked solid but not razor-sharp.

Certainly Kuma was pitching ahead in the count ... er, controlling the zone (TM).  And he had them in between, swinging weirdly through 87-90 fastballs down the middle.  On the other hand, the CF camera wasn't showing any late break on his offspeed, and that turned out to be right:

Note that the split cluster (leftmost, downmost grouping) should be towards or near 0" vertical.  Also also, the side-to-side movement was fading right on his FB and SF, so apparently if he "got his fingers on top" last game he didn't have quite that feel this time.  RockiesJeff can correct me if I'm wrong, but that little smidge of 'elan can come from a lot of fatigue-related factors.  Kuma wound up with only 3 strikeouts on the night, versus two or three Back Leg Specials.

Hisashi Iwakuma minus his late break, but plus everything else, is still 7 innings and 2 or 3 runs :- )

We're guessing that if you are on this site, you haven't needed a Ron Shandler subscription to spot the Korean player in the division.  ... Bat571 and Dr. D er, just about everybody who Shouts and some who don't, fret that Lee should be getting more of Lind's AB's.  True, true.  But let's drop that for one second and consider what the 1B platoon has given us.  Updated chart:

Lee and Lind together have 274 plate appearances combined; the three MOTO's have 260-270.  Usually before a sports team wins a championship, there's a phase where you go "Boy, I don't know how far the team itself will go, but wow, Jones and Hutchison and Alexander got more than anybody wants."

Behind 5-1, the Rangers came charging up one run at a time, in the rear view mirror, gaining 50 yards every mile, like the Wile E. Coyote landlady in Kung Fu Hustle.  I fell off the chair the first time I saw the poor sap running with all his might ... stealing little glances at her reflection ON THE KNIFE STICKING OUT OF HIS SHOULDER!  .. her grim, calm, murderous, cigarette-dangling expression, closing in slowly ... heh, heh, HEH!

The chasedown hit its max velocity when the Rangers scored on Nick Vincent for a 5-4 score, the tying run RISP, and 0 out.  AND WOW WAS THIS ONE GOING TO HURT.  Somehow Vincent got the next couple of outs with his weird little cut fastball.

Vincent throws two pitches, a totally mediocre 90 MPH fastball and an 87 MPH cutter that does break a good 2" gloveside.  I don't grok his repertoire.  That doesn't mean, he can't pitch.  It means, the degree of difficulty rating that batters give to him is beyond my perception.  Vincent has 33 whiffs and 4 walks this year (!) and a 2.55 lifetime FIP (!!).  To me he's like a knuckleballer.  It seems like he's going to get just blasted, every time.  And he walks out of there with 1 IP 0 H 0 R 0 BB 2 K.

Steve Cishek looks like he'd be nothing much, but even the Landlady better think twice: 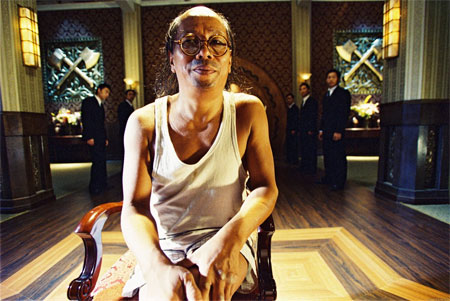 In the 8th, with two on and one out, fate at long last gave Chris Iannetta a break when a firm grounder just got through the left side.  Ryan Rua threw it on one hop to the catcher ... but, impossibly, the RP Shawn Tolleson had decided to go over and block the plate for the Ranger catcher.  The ball skipped off his wrist, the M's got their insurance run, and everybody scampered into the next base.

Had the M's botched this one, we'd have been down in the Rangers series by a LeBron Finals type score of 7-3 and --- > this morning, we would have felt like there was a Rangers-Mariners jinx brewing.  Not after that play and that loss.  Thank you, Shawn Tolleson.