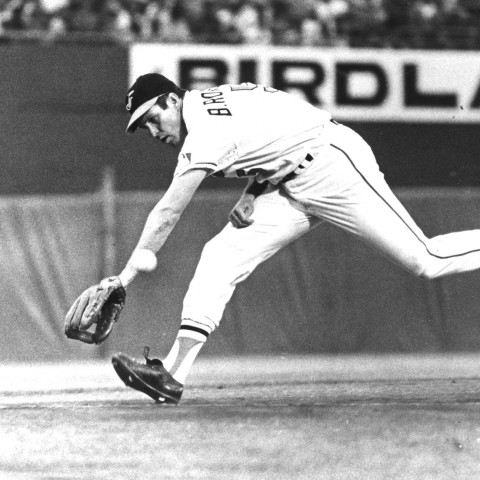 The first few games of Dr. D's childhood?  The 1970 World Series, in which Johnny Bench hit about three game-winning doubles down the left field line ... only to be snared by Brooks Robinson laying full out, popping up and throwing Bench out at 1B.  If you didn't see Wednesday's game:

Diaz fans Jefry Marte, avoiding the sac fly and immediate extra innings against the soft underbelly of the M's bullpen

Simmons works it to a 3-1 pitch

Except Kyle Seager reverses the outcome, snatching victory from the jaws of defeat

How good is Seager?  SSI would suggest that we lay aside the sabermetrics for a moment.  They've got Seager as a very good third baseman, although it's tough to tell for a lot of reasons.  Including the 21st-century shift.  Also let us lay aside the trite paradigm "I think this .572 slugger is better than this .569 slugger but is worse than this .581 slugger."  Why do we care which tremendous player is a shade the better, or a shade the worse, than some other tremendous player?  Isn't the point that we want as many tremendous players as we can get?

The Seahawks have seven major stars on defense - two on the DL, two at linebacker, three in the secondary.  Isn't that the point, that they've got about nine or ten players (of the starting 22) who are major stars?  Why get lost in the question of whether Bobby Wagner is better than Luke Keuchly?  The 49er's would be okay with either one of them.

Seager's arm is almost supernaturally consistent on throws to 1B.  He looks to have excellent range to his glove side, he specializes in the kind of lay-out down the 3B line we just saw, and his glove "has velcro on it" according to Scott Servais.  Defensively, if Kyle Seager is your third baseman, you are giddy about it.  And as glove specialists go, Kyle Seager can hit a little bit, too.

Question is floated, How do you see the pecking order shaking out?  Do we have reliable pitchers now?

Dr. D's two cents on this 30,000-foot view satellite recon:  The rest of the year is likely to be a "hot hand" question.  Christine Michael vs Thomas Rawls?  Either one is a big game or a terrible game away from giving away snaps to the other one.  Same deal-io here.  Arquimedes Caminero is probably a few botched games away from giving the 7th to a Drew Storen who fans 6 out of 8 guys in a series.

I don't have a lot of confidence in anybody down there, except Diaz, of course.  They've looked great lately, with a 1+ ERA during the winning streak.  Could be the "three tough saves" guys will hold their jobs.  You think?  Or could be that a hot offense, and a hot KPax/Taijuan, will have to pick up slack for setup relievers who fade.  We could use some more 6-2 leads when the starter comes out in the seventh.

Chris Iannetta crushed a pitch the other way, into right-center field, deep and high off the wall.  A double that was hit better than his 50th-percentile home run.  He had another hit, too, and was 2-for-4.  Changed the scoreboard with an RBI and changed it again with a R.  Threw out a runner stealing second, and that runner could have been the ballgame.

Gimme two starting catchers, so that I have a good player behind the plate on my worst two games of the week, and I'll be glad to try to build a winner from there.

Our guy hasn't had his '70 World Series moment (remember it well) but I will guarantee you that every GM in the game knows just how good Kyle Seager is.  Fans in Detroit or Philly?  Bah!

Funny though, I don't have any memories of Robinson until the '69 Series.  Miracle Mets, of course.  He was 32 by then.  I imagine some Seattle kid's first memories of Robby Cano were last year.  He was 32.  Same thing.

Back on the win train.  Choo Choo!! (and not Coleman.  Died on Monday.  RIP.  Either 78 or 80, depending on which birthday you want to believe. He had played in Spokane in '61, PCL.  I only remember him from stories of the expansion Mets)

Immediately after that play

Immediately after that play last night I said to myself (wife was in bed), "That was Brooks Robinson!" I flashed back to Brooksie's incredible plays in the World Series. He did the same in 1966 as he did in 1970, he broke batters' (and teams') hearts with incredible plays on "sure" doubles down the line.

That play might have been season-saving. Incredible. Did I say incredible? It wasn't just the play, it was the context. And it wasn't just the grab. When he snagged it, I thought, "He'll never be able to get a throw off in time." I was more stunned by how quickly he got up, turned, and fired the ball to first than I was the grab, which was Brooksian in itself.

Doc, for your edification

I once spent a day in Seattle with Brooks Robinson (long after he retired).

A nicer human being has never walked the Earth.

Now that you bring him up, it makes you wonder whether he's the guy James was thinking of with his rule "accomplished defenders tend to be nice guys."