Skip to main content
Postgame
M's 1, Angels 5
If Picasso could go through 4 years of blue, we can suffer 10 days 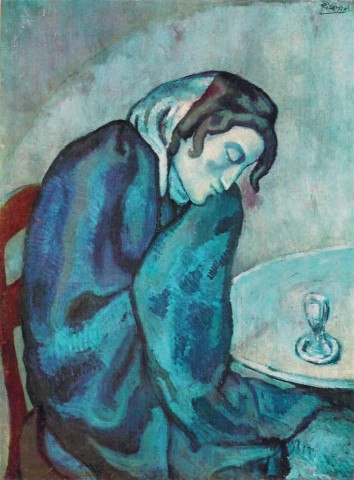 If you want folks to reassure you that Gallardo is doing well, ask anybody with the Mariners.  Not trying to be snide.  They're committed to him and that's how pro sports goes in the days of these kinda bucks.  The TV crew praised every decent Gallardo pitch with gusto and Servais said that Gallardo threw the ball "crisply."

If you want somebody to tell you the truth, ask somebody who noticed 10 baserunners in 5 innings, and umpteen cripple pitches the Angels missed -- this being Gallardo's upside scenario.  He brought his BB's down by making the Angels prove they could hit HR's.  The weak Angels lineup couldn't rebuke Gallardo in this one.  Well, only 1.8 times per 9 innings.

Dr. D suspects this will be a Grand Theme in April-May:  Reduce the BB's from 4+ to 2+, under penalty of a steady rainfall of deep enemy fly balls -- with runners on.  Hopefully enough of them will be caught on the warning track.  Check him on this prediction, boys.

Will cheerfully admit we did not expect to see him touch 93-94 MPH (though the location was maybe AA level).  Good on him.  Will also be glad to admit that the curve ball was major league average.  Have admitted many times before, and will admit again, that Yovani is tricksy.  It's fun to watch him make a hitter top a 3-2 curve ball into a 5-3 groundout to end the inning.

Also will be glad to admit that 10 swingthrus were more than we expected to see in any Gallardo start this year.  4 K's offers the faithful a glimmer of hope.

But Gallardo threw I don't know HOW many challenge fastballs Right. Down. the. Pipe. with runners on.  The performance was full of bad misses, bad counts, violent swings by the Angels, tricky 3-2 curve balls inside to escape, and a scuffle that left the M's in the game after five.  You go dude.

Sorry to say, no stock upgrade at this site after the first game.  But he did show a bit more than expected.  Importantly, this Gallardo start cost the M's absolutely zero in the standings.  Any starter woulda lost Friday.

During the first 3.5 games Dr. D was glad to tip his cap to the Astros' superb pitching.  No can do against Jesse Chavez' blizzard of preDICTable outer-third fastballs.  Painful to watch the M's act surprised against 8, literally 8, consecutive nibbles away.

In-game you could hardly believe your eyes.  Chavez would rear back and fire, and the M's would swing underneath yet another fastball or cutter.  It was quite strange to watch.

Reportedly a bad head cold made its way thru the M's clubhouse right after the WBC.  Coulda left guys weak, strained, their timing way off.  If so the Astros were only too happy to lock the M's into a funk.

A terrific runup in short right center, to double off Trout and pole-axe what would have been another Angels rally.  Five games in, how many fun plays has this dude made?!  Soon he'll be makin' em to win games, baby.

Felix against a tomato can.  See you at the ballpark.

Shortly, Moore and Povse will have completed their assigned mission of making mincemeat of Texas League mooks and the wisdom of calling up Maddux-lite and Smoltz-lite will be inescapable.

OK, they aren't HoF'ers-lite, are they?  But they are real good, young and real ready.

Perhaps the weight of time will bury the AL West under Dipoto's Povses, Moores and O'Neill's ...

Gotta start with a trade

To make room in the AAA rotation.  Given the needs of the team, adding stock to the low minors would be helpful anyway.

Zuni's ab in the 7th hurt the worst last night.

Goes down 0-2, battles like crazy, and gets to a full count. Then the actually not good Bud Norris rears back and fires a 3-2 Challenge Fastball right down the middle at a staggering...90. And Mike swings right through. Down 2 with 2 on and no out. I actually yelled at the tv and I think I scared my nephew.

I have no problem with looking offspeed on 3-2, but ... you're not aware enough of a fastball to foul back a 90 MPH teed up?

Not a good pitch for Zuumball, agreed.

...it's hard to blame our pitching for how things have gone this far, at least in the aggregate. Head colds and the like make sense, but the arms have risen to the challenge in the first five while the bats - unlucky drops and gooad approaches acknowledged - haven't gotten the same results.

Have had pennant-class pitching, yep

Cy Young lefty, TOR righty, WBC-san, superstar closer, several fine RP performances, and I've got to admit that our 4-5's showed up decently the first time round, at least in terms of final results.

In the 7th, I was surprised coach didn't have Zunino bunt. I guess this team has no interest in manufacturing runs. I get not wanting to give away outs, but it not like it was the 9th; coupled with the teams current not-clutch factor, it was a head scratcher.

Agreed with the article Doc, here comes another low and away...if / can see it coming...

It,ll eventually come around, yeesh, though another 1 for 8 with RISP. Its hard to watch so many chances flitter and blonk away.

I think the biggest problem is...

That these guys CAN'T bunt.

Which is understandable, kind of.  Sports moves toward specialization.  These whippy bats and 11 degree launch angles would tear apart our beloved teams of the 1970's.  Sigh.

There are six Mariners who can bunt.

Segura, Dyson, Martin, Heredia, Motter and Ruiz.  They're all dynamically skilled with the bunt. We've seen some phenomenal bunts already this year.  Dyson and Martin both got robbed of hits on perfectly placed bunts by a GG pitcher.

bunt horribly until 2 strikes a few times.  But I've seem him put down good bunts too.  Almost as if some of the failures were at times he wanted to swing, if my recollection of the situations is correct.

I don't know about Haniger and actually think Seager and Cano could if they tried.   None of those 3 are likely to try anyway.

But yes...I think Haniger is capable of bunting...Saunders was. :)