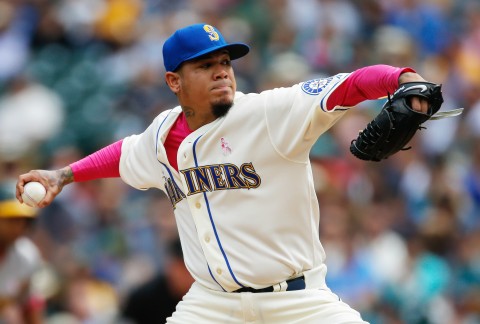 Two more games till they count!  We are undefeated, untied, unscored upon.... and we got Ichiro!  And if all that were not baseball-beauty enough, we've got Mike Scioscia calling this dismal Shohei Ohtani game "a great outing."  Those guys down there in LA are taking on some water 'neath decks.  Check their ERA's after you sort by K's.

Anyway, here's how the Cubs game looked, short and to the crux of the matter:

FELIX HERNANDEZ.  The question was, how much "bounceback life" did he have after a couple of light seasons' innings.  The answer was, in this game a certain amount, not as much as Dr. D would have liked.

He hit 90-92 on the gun, threw that plus-plus 12-6 curve he's always had, threw a few sloopy sliders, hit the mitt on the black maybe once in three times.  This was good enough to hold the Cubs to 1 run in 3 2/3 innings, and the 1 runs was a spring homer -- an Arizona fly ball that scraped the fence on its way out.  In the regular season the OF takes two steps back and stifles a yawn.

Still, it was kinda sloppy command-wise ... but then again, I guess Felix hasn't thrown much yet.  So:  "bounceback life" still UNKNOWN.

Dr. D has always been Old Felix' biggest fan, based on the large-muscle engagement, the beyoooooootiful slide of the CG down the centerline, and the depth of his wisdom. SSI will bet Felix, whether or not he's going to show any type of Justin Verlander bounceback.

He also insists that the Opening Day shtick is unseemly narcissism, a type of delusion / hallucination that he is a better pitcher than James Paxton, but .... if the narcissism drives Hernandez to 16 wins along the way, so be it.

Felix came out after 3 2/3 and Altavilla came in, started with a thunderbolt fastball that drew a terrible swingthrough.  Threw a slider that missed by a mile .... garbage swing!  Threw another vicious fastball .... third straight swing and miss.

So we still haven't seen the "slider for strikes at will" but we most certainly have seen the body language of a kid ready to slay his ten thousands.

ARIEL MIRANDA fired 3.0 innings, which is like four hours in an exh game, with a line of 3.0 1 0 0 1 4.  He did this in a "good Ariel" fashion to which you are quite accustomed.  His performance increased Dr. D's anger at the pointless "churn" that has the eternally mediocre Wade LeBlanc parachuting, at the very last possible moment, into the M's 25-man roster.    GRRRrrrrrrrr  What a way to treat the Mirandas and Whalens and Morins and Bradfords and Povses of camp.  Wade LeBlanc?!?!

RYAN COOK flashed all the hot stuff that he had when he was an All-Star for the A's (94 fastball, big yakker, fadeway change).  Problem was, he had little idea where any of it was going.  1 inning, 2 walks, 3 hits, and a trip to Tacoma, one presumes.  He's just one of the boxes that has to be moved out of the garage for Wade LeBlanc.

To get some perspective here on why LeBlanc.  I thought 50 games and 68 innings last year showed something but not the quality.  So he's potentially the half of a wolf we don't have much of but needs dentures or implants?  He does seem to have an option remaining.  He's younger than Ichiro?  I'm out of optimism on this one...

Vogelbach and Romine make the squad.  Ichiro may start on the DL, which may mean Nieuwenhuis gets the opening day call, even though Gamel is ahead of schedule.  Felix gets the opening day start.  LeBlanc gets a long role and Miranda to AAA.  I barf at that move.  8-man pen with 4 starters, right out of the gate.  I hope Nieuwenhuis gets all the early vR starts and not Heredia, but I will be wrong.

I'm not even talking about a Bautista type breakthrough at 29 after 1725 Mil PA and 2038 PA in the majors.  I'm talking about 950 total PA in the states.  Still, his OPS Vs RH was .667 through Aug 23.  That's not his ceiling.  He's heading up, Nieuwenhuis is heading down.  I guess it's possible that Nieuwenhuis has a breakout in his age 31 season, but far less likely.  I don't even have to look up how to spell Guillermo Heredia every time though.  I can't find a study showing pop is better than OBP, but...I'll take the defense of Heredia foremost, especially when the potential offensive difference is so slight, we're talking about a guy hitting 8th or 9th in a stacked lineup and the better defender still has room to grow.

But I am the big Heredia fan.  I get that no projections are showing what I see.  I get that people don't see in the season stats that he was 20% better until falling off a cliff from being dinged up late in the season.  .387 OPS on a .183 BABIP his last 97 PA didn't look like a simple slump to me.  He was OPSing .734 Vs all comers to that point.  Nieuwenhuis is .695 career.

Cosign. Nieuwenhuis is garbage fodder. The veteran churn doors have to eventually stop and you do have to know what you have in your prospects, which Heredia still is, imho

Which would seem to justify the Ichiro band-aid

If Nieuwenheis was the best you could scrape out of the mayo jar otherwise, then a fair chance for Ichiro makes baseball sense as well as marketing sense.

After he got hit in the head, though, I'm hoping his reflexes and eyesight haven't gone too far south yet ....

If they hadn't just chintzed Iwakuma...

...I'd mistakenly accuse the Mariners of having class.

Alas, they did chintz the bear...fired and rehired him to save 100 grand...That's...really lame

The guy brings a glove and hits lefties, that’s good enough to be a 4th OF in the bigs, a valuable one.  I am not a believer in his vR abilities, but will gladly admit the error in my ways if he shows the ability to be a fulltime COF bat.

I am not a huge Nieuwenhuis fan, either. He’s a 4th OF type, too.  However, his track record indicates he is better vs. RHP.  He brings a + glove, a good arm, can play CF, hits the ball out to all fields, and hits RHP better than Heredia.

The guy knows a ball from a strike.

When you get that part right, you have the potential to improve offensively.

... limits himself to a soft remark on Twitter, "Classy and unsurprising response from Paxton" in ref to Zeus' comment that he was happy for Felix.

We'll all be rooting for Felix to deliver us W's of course, and there are few athletes EVER who deserved a playoff experience more.  That said, Felix' greed for this OD start ahead of James Paxton has drained most of my enthusiasm for him (and not even because of any injury to my adopt-a-Zeus).  I'll be *thrilling* to the exploits of Boomstick, Haniger, Zuumball, Paxton, hopefully 'Bach, maybe Ichiro.  Felix' victories will be okay by me.