Skip to main content
Postgame
5 Back Leg Specials
get outta here with that slop, kid 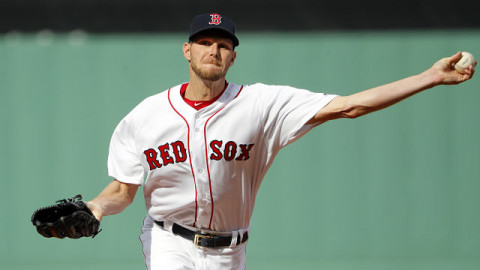 At D-O-V we have the graphix to support this post.  Pictures are a bit wonky here.  At https://drdetectovision.wordpress.com you can find the locations of the 5* back-leg specials the Mariners hit Tuesday.

At this Mariners page there's a convenient video link to all 5 homers last night.  As we've always sermonized :- ) there is a difference between (1) a popup/long fly ball that is an HR/F roll of the dice, and (2) a pitch where the batter sets his back foot and launches the ball into the power alley with a golf swing.  Beckham's were the latter.

A second Back Leg Special, this one off the batter's eye (!) and a second bat flip.  It was a first-pitch fastball up, 92.1 MPH.  True that you have to be careful about up-and-outside but 92 MPH from Chris Sale is another conversation when you're dealing with the "tunnelling" on his slider.

A blast to straightaway center.  And a great 7-pitch AB, going

Two straight curveballs, one in, one out.  Jerked over the LF wall like a 3-iron.  OK, maybe this one's not quite a BLS.  If you want to use HR/F to argue it coulda been just a double, then fine.  The ball was still barrelled up, pulverized, and into the power zone at a premium launch angle.

Sequence:  CURVE down middle 0-1 ... Fastball on black, high ... Fastball high ... Curve on knees 2-2 ... Curve juuuuust inside for a ball but WHOOOOOPS Domingo swung at the ball and check the video if you want to know what we mean by Back Leg Special.  The little bit of extra load, the extra lift, the intentioned spray direction, etc.

Q.  Are the Mariners going to average 8.7 runs per game and thereby exceed 1,400 this season?

A.  Maybe the league will hold them to 1,200 or so.  But it's pretty sweet to see Healy and Beckham (and Domingo for that matter) laying down the artillery fire that they are.

I also enjoyed the Smith double where the CF took the ball off the wall, fired it back in to 2B, the camera shows.... NOTHING on second?  A few seconds later, they figured out where to point the camera :- )

The ballclub netted another 2 doubles, a triple, and 8 base hits are very respectable in a Sale game.

A.  B- in a vacuum; the curve wasn't dangerous and the whole game was a FB-cutterfest.  Consider the enemy and his game management, A-.

Hope to do another post during the day but ... preferable would be a 12-point bullet list of addenda, best/worst things in the game.  Posted in the comments below :- )